How to initialize new disk for UEFI/GPT?

I'm setting up a new build, with all new hardware, tabula rosa. I want to have multiple Linux installations and common data partitions.

From what I'e gathered so far, using new hardware and up-to-date kernels, I should be able to use rEFInd as a simple boot manager and use a fully modern boot process.

Since disk partition editors tend to "helpfully" hide the EFI partition, how can I set that up on a new unformatted disk?

With gparted 0.16.1, I created a gpt type partition table. But, there's no indication that this is the case: the display looks no different than before or a legacy partion table in place. So did it do anything? The New partition command gives no options for the special EFI reserved partition, so did it do that automatically too? 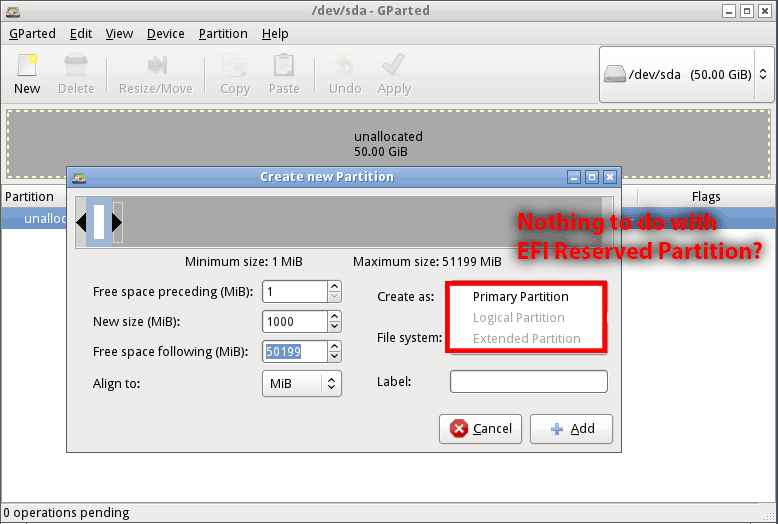 There is no existing OS, and no optical drives. Assume that any existing contents on the ssd should be blown away (junkware from the manufacturer or previous attempts to partition). I'm booting UBCD from a USB thumbdrive, so using gparted or other tools included in the Partion Magic image would be easiest.

Once I have a proper GPT disk with the special EFI partition, I'm comfortable using gparted etc. for addional partions, as I've done as long as there have been PC's with HDD's.

Current util-linux versions of fdisk support GPT, the one I'm looking at here is fdisk from util-linux 2.24.2 (reported via fdisk -v).

Run fdisk /dev/whatever. Have a look at the options with m. Note these change depending on the state of the partition table. First check what state the disk is currently in with p. Note the Disklabel type; if it is gpt you don't have to do anything, you can delete the existing partitions and start creating your own.

If not, use the g option. This will eliminate any existing partitions because fdisk does not convert the MBR table. You can now start adding partitions with n. For the EFI partition, use t to set the type to 1, then the table should read, e.g.,

Obviously that's a bit silly, but hopefully the point is clear. None of your changes take effect until you use w and exit.

In gparted, you have probably chosen "Device" in the menu bar and then you create a GPT partition - for the device, obviously. It is as far as I can see a device-wide assignment, and when you then create different partitions inside this device, any formats are possible, see for example an excerpt of a tutorial UEFI - Hybrid Install here (side-note: which I have used to successfully install Linux on a second SSD with Windows 10 on the main SSD):

As far as I remember, GPT is not mentioned again when you create these partitions inside the chosen device-wide gpt partition. The main step is just the start, to choose "Device" in the menu. After choosing GPT for the full device partition, your whole disk will be started from scratch, any sub-partitions that you had on it up to then will simply be deleted. That is a full cleaning so that everything on that device will have GPT partitioning scheme as the base.

Though that mentioned tutorial is just for an external drive (originally meant for a USB drive), in my case, this "UEFI - Hybrid Install" was the successful guide to install Linux Mint on my second SSD. I plug this SSD to the computer using an SSD-caddy that replaces the DVD drive so that I can take it out like a USB stick, at the speed of an internal SSD.

I do not see a reason why this tutorial (and also the next two GPT-only options of that same tutorial - UEFI - Unflag/Reflag Method and UEFI - rEFInd Method - should not work on a single internal SSD with no other main system installed as well. In my case, my current second SSD that has Linux is not in the least affected by the main Windows drive, it is fully separate, I can even take out the caddy and put it in another laptop or use a usb-sata3-cable to plug it in and use it as the booting drive.

Summing it up. In any case, at that point where you create a primary partition using the "Partition" menu button, the main GPT assignment has already been done. And if you want to create an EFI bootable GPT partitioned drive, the hybrid installation type that I have just done proves that this is not just achieved by a simple GPT assignment

In my hybrid case:

the BIOS boot partition is only needed for doing legacy boot on a GPT partitioned disk. If you boot with UEFI, it is not needed and will not be used.

Source: comment under the accepted answer of How do I convert my linux disk from MBR to GPT with UEFI? (a link to "Server Fault" Stack Exchange).

And that accepted answer shows in point 6 what is actually needed to "be EFI GPT": it is a rightly flagged

The first three links are just for installing Linux on an external drive. Please mind that I got to those tutorials searching for Mint on external SSD. Windows 10 on PC..

The fourth link from "Server Fault" is for converting MBR to GPT and add a BIOS boot. Also that guide is highly similar, just using gdisk instead.

Obivously, both guides give an understanding of what is needed for a propper EFI GPT configuration. I cannot guarantee that they are fully relevant for an installation on a single main drive, it just looks promising enough to link them here. Hope it helps someone!

Not the answer you're looking for? Browse other questions tagged partition gpt uefi or ask your own question.

7
Expanding a disk with a GPT table
1
Wiping the boot partition of a GPT disk in Solaris 11.3
1
Installation and booting scenarios for combinations of boot sector (GPT or MBR), firmware (BIOS or UEFI)?
3
How to recover lost data after disk MBR to GPT conversion?
0
how to fix (or reinstal) UEFI boot patition on GPT disk?
0
manipulating the protective MBR on a GPT disk