How to troubleshoot audio problems / issues in Arch?

I've been running Arch for almost a year now, and my audio was working great until I started messing around with things (>.>) The reason I started messing around with things is because I want to get audio support working in Skype, which I was able to hear the sound effects Skype makes, but was unable to to use the microphone. On a side note, my hardware is a MBPr late 2013.

Now this brings me to my first question, which "Built-in Audio" configuration option should I choose? I obviously want to be able to use the built-in microphone along with the speakers, so I chose, "Analog Surrond Output 2.1 + Analog Stereo Input". 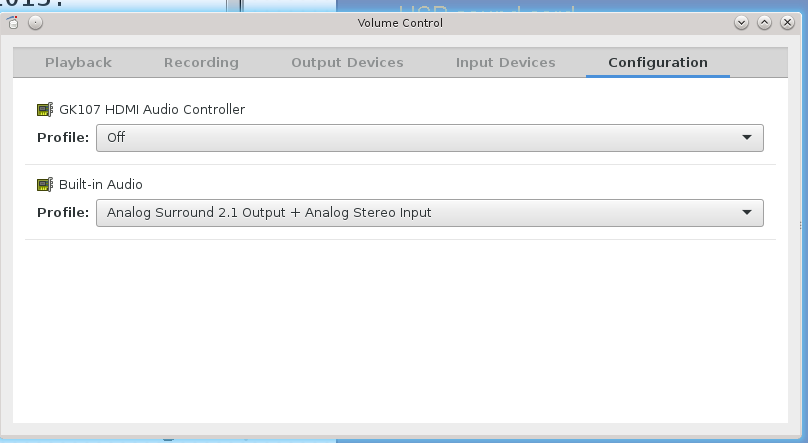 However, all the options I can choose from are the following,

When I open alsamixer it states the audio device as being "pulseaduio", and the "Master Front" doesn't appear to be muted.

Any help on how I can troubleshoot my audio situation would be greatly appreciated.

The problem was rather simple, I needed to select Analog Stereo Duplex to get the mic and speakers working for things like Skype calls.

Not the answer you're looking for? Browse other questions tagged arch-linux alsa pulseaudio or ask your own question.

1
Fedora 15 - Audio Configuration
2
Setting up surround sound with optical out
20
How to enable both built-in audio output and HDMI audio output with PulseAudio?
34
Pipe/Mix Line In to Output in PulseAudio
2
pulseaudio: use both hdmi (stereo) and 5.1 simultaneously
3
Audio stereo jack plugin not detected
3
PulseAudio changes default device occasionally
0
Simultaneous digital and analog output on pipewire
0
Trying to record from a USB sound card
0
Cannot record microphone with SimpleScreenRecorder