Then I configured Apache and some configuration for CGI. But moving forward I wanted to know more about Apache modules. So I uninstalled the exisiting Apache and tried to install from apache site.

But it was a totally different installation and I got confused. I want to know what is the difference between two installations?

Can you please also help on the difference between "installed softwares". Actually when I installed with apt-get, I got all configuration in /etc/apache2 and "www" directory in /var. But when I install through source code, all configuration is in /usr/local/apache2 and www is replaced by "htdocs". What is this all about? An please also help on how can I get https as a command?

Now I have installed again using :

But it was a totally different installation and I got confused.

If you compile from source from the official latest release, there can be some or significant changes in the software as I understand it.

Here is some info on software being delayed in getting to the repositories.

One thing new Linux users often notice with package managers and repositories is a delay before new software versions reach their systems. For example, when a new version of Mozilla Firefox is released, Windows and Mac users will acquire it from Mozilla. On Linux, your Linux distribution must package the new version and push it out as an update. If you open Firefox’s preferences window on Linux, you’ll note that Firefox has no ability to automatically update itself (assuming you’re using the version of Firefox from your Linux distribution’s repositories).

I want to know what is the difference between two installations?

You could read up on these and go from there:

Here are Apache's features on Wikipedia.

Apache supports a variety of features, many implemented as compiled modules which extend the core functionality. These can range from server-side programming language support to authentication schemes. Some common language interfaces support Perl, Python, Tcl, and PHP. Popular authentication modules include mod_access, mod_auth, mod_digest, and mod_auth_digest, the successor to mod_digest. A sample of other features include Secure Sockets Layer and Transport Layer Security support (mod_ssl), a proxy module (mod_proxy), a URL rewriter (mod_rewrite), custom log files (mod_log_config), and filtering support (mod_include and mod_ext_filter).

Popular compression methods on Apache include the external extension module, mod_gzip, implemented to help with reduction of the size (weight) of Web pages served over HTTP. ModSecurity is an open source intrusion detection and prevention engine for Web applications. Apache logs can be analyzed through a Web browser using free scripts, such as AWStats/W3Perl or Visitors.

It supports password authentication and digital certificate authentication. Because the source code is freely available, anyone can adapt the server for specific needs, and there is a large public library of Apache add-ons.

Here someone is like you trying to understand the difference between the version his Linux distribution uses and newer ones released by the official developer.

Since you don't mention your distribution, I'm assuming that it's Ubuntu, I use Debian Wheezy, and here is apache2 for that release:

You can find an explanation and information about the LAMP stack here.

LAMP is an acronym for an archetypal model of web service solution stacks, originally consisting of largely interchangeable components: Linux, the Apache HTTP Server, the MySQL relational database management system, and the PHP programming language. As a solution stack, LAMP is suitable for building dynamic web sites and web applications.1

The LAMP model has since been adapted to other componentry, though typically consisting of free and open-source software. As an example, the equivalent installation on a Microsoft Windows operating system is known as WAMP. 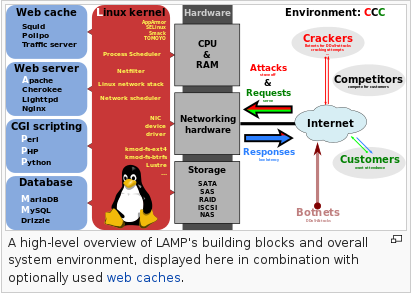 Not the answer you're looking for? Browse other questions tagged software-installation apache-httpd or ask your own question.

65
What is the Linux equivalent to C:\Program Files?
83
How to find the installation path for a software under linux?
57
Into which directory should I install programs in Linux?