I like kdiff3 very much due to the way it displays the result. It can compare more than two versions of a file or directory and displays the differences in columns:

Here is a screenshot for those who don't know it: 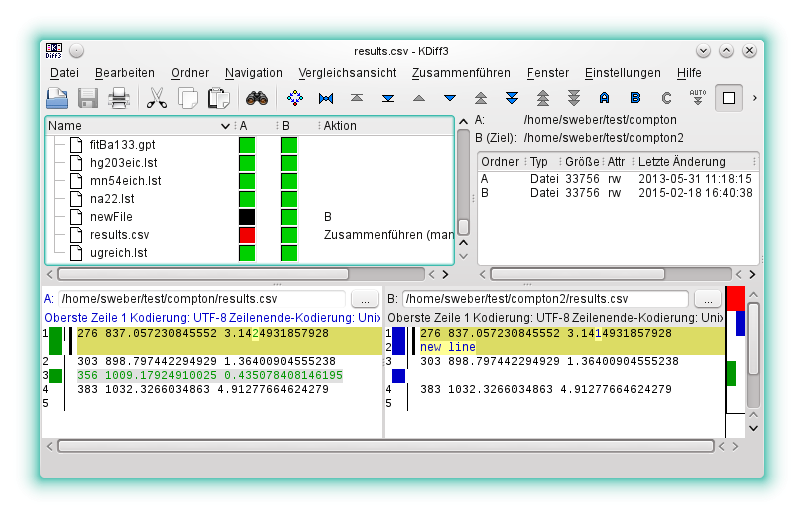 Often, I would like to give away this nice output, but unfortunately, KDiff3 does not support to save/print its output.

The simple output of the command line tool diff is a bit... puristic, with option -y I get at least a two-column-output, but also the output is not so nice.

colordiff seems not to be what I'm looking for.

Is there any other tool that can produce an output like this and save it to html/pdf/whatever?

Edit: I'm looking for a tool, which

The last point is the most important. Something like a screenshot would do the job, but usually, the files are too large for the screen, and I did not find a tool for linux yet, which can capture an entire window.

Its top-level tool (coderev.sh) is set up to work with CVS or SVN repositories, but it's just a driver for codediff.py, which does all the actual work.

To get side-by-side views, I think you have to do a directory diff, rather than a file diff. When I tried a single-file diff, it gave me an inline view of the diffs instead. Of course, that may be fine for your purposes as well.

There is an online demo.

Not the answer you're looking for? Browse other questions tagged colors diff or ask your own question.

9
How can I get the most bang for my buck with the "diff" command?
0
dir-color failure in html and css files in several terminals
55
Is there a condensed side-by-side diff format?
1
diff files within dirs listing by date modified
1
Tool for visual directory comparison
1
How to recursively side by side diff directories with line numbers in the diff in unix?
3
Naive line-by-line comparison like "comm -3" but looking like "diff -y"
6
Side by side diff of large files
10
diff showing only differences inside line