How to make Raspberry Pi to receive an IP from a router and also pass another IP to another device?

I know that I could achieve the desired result with an Ethernet switch, but I'm curious if I can get this with some cheaper solution.

The idea is as follows:

Essentially, I'd like RPi to behave like an Ethernet switch, which requests one IP for itself and then routes other requests from/to the other device.

Here is an image which explains how I'd do it with a switch: 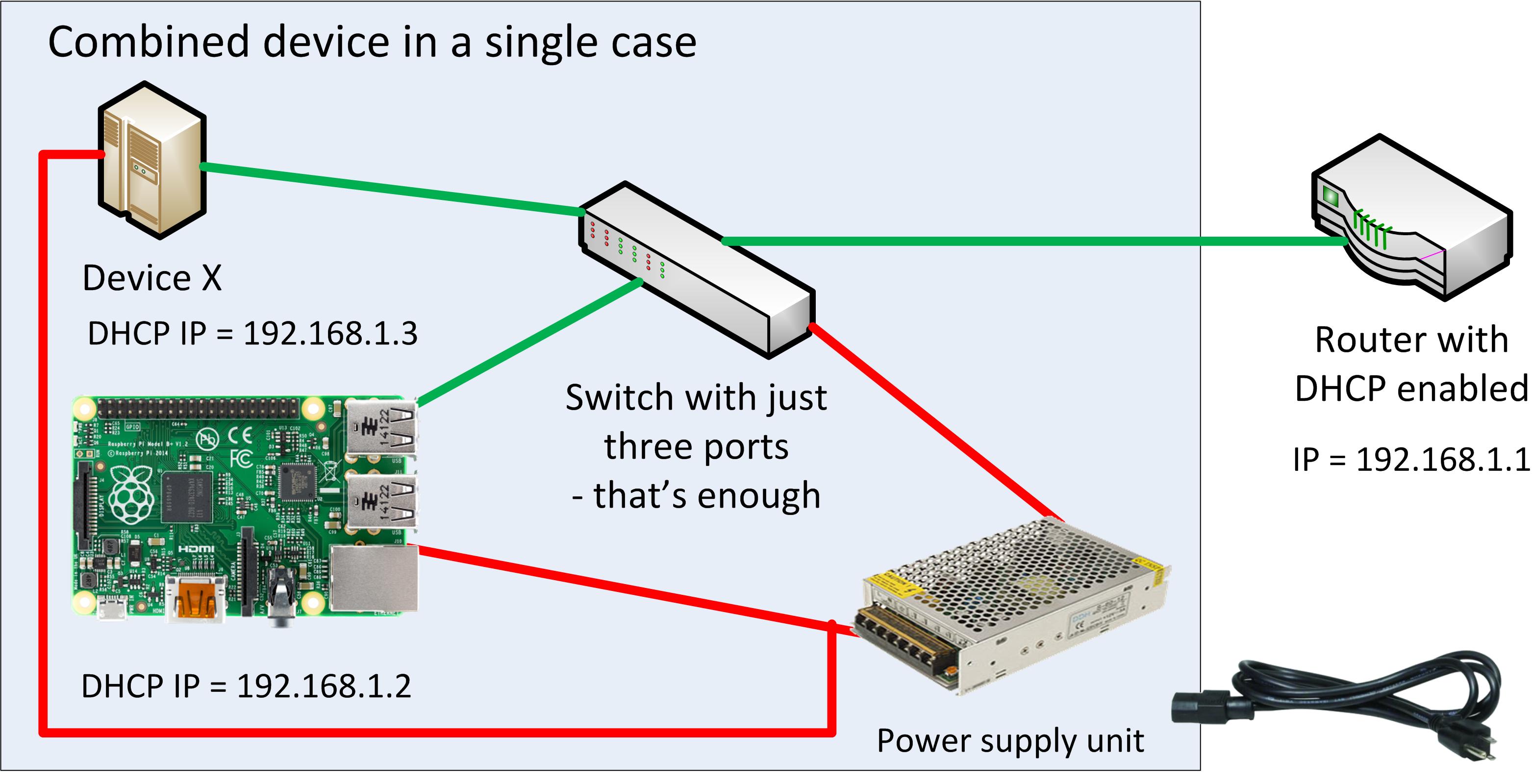 And here is how I'd like it to work: 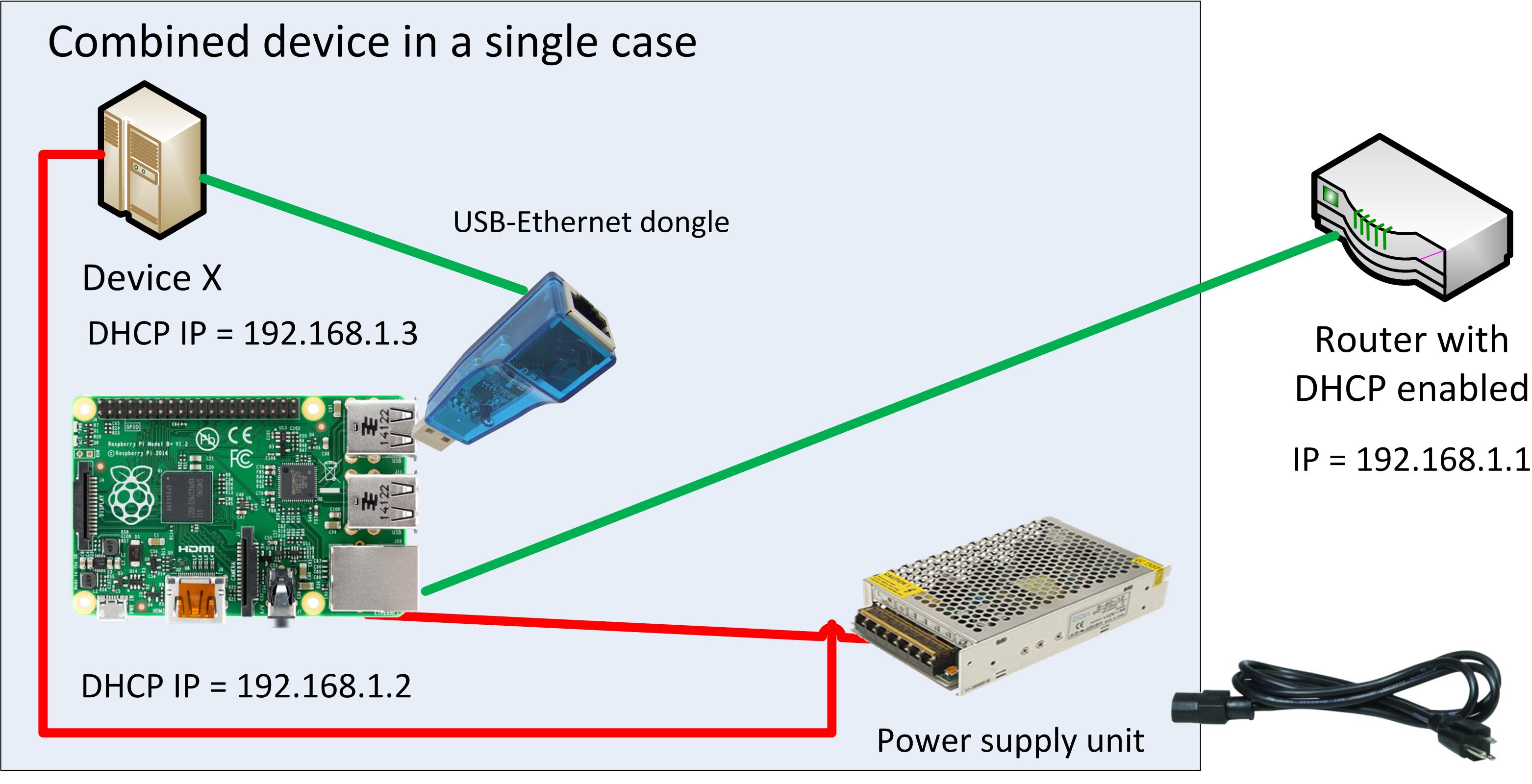 Now imagine that I have five (or more) such pairs "RPi plus Device X" and you'll understand why I would want to get rid of the switch, if possible - I could buy five USB-Ethernet dongles instead of five 3 port switches, which would require separate power supply and two additional wires.

Are there any Linux configuration options to make this setup to work with RPi's Ethernet port and an Ethernet dongle?

You should be able to achieve this by setting up a bridge between your two network interfaces.

Assuming your integrated ethernet interface is eth0 and that the on via the USB adapter is eth1, a configuration like this in /etc/network/interfaces should work (provided you've installed the bridge-utils package and that your kernel supports it):

If you run ifconfig, you should then see a br0 interface (probably with the MAC address of eth0 if I remember well). This one will effectively be the merge interface of your RPi and get its IP address from your router.

The traffic coming from your other device should flow through the bridge, and it should get its IP address too. If the traffic doesn't go through, you may need to allow it via iptables. You may also be interested in this article.

(As a side note, this wouldn't necessarily work with wireless LAN adapters, since many cannot use multiple MAC addresses at the same time.)

Your best bet is to set the Pi with a static ip.

From there you want to install a dhcp server

You then edit the configuration file at

which tells the dhcp server which interface on which to listen with this line:

You then start the server daemon with:

Now any clients that broadcast for an IP connected to eth0 will be managed by the dhcp server.

Be aware that the Pi USB+Ethernet comes from a single dumb on-board chip that connects to a SINGLE port on the Pi GPU = i.e. the USB Ethernet dongle will NOT just 'link direct' to built in Ethernet

Of course it's more efficient to read & write 'blocks' of data at a time, however whilst the Pi is sending a block of data out on one interface, the other is disconnected so anything coming in will be 'dropped' and have to be retransmitted ...

Depending on how the Ethernet & USB 'dongle' drivers are coded, chances are your 100mbs Ethernet will be reduced to way less than 10 mbs (I've seen some reports in the kbs range)

Not the answer you're looking for? Browse other questions tagged networking iptables or ask your own question.

3
How can I make sure that eth1 get its fe80 IPv6 address immediately on startup, even if it's not physically connected?
3
Get MAC address of a directly connected device
4
Understanding virtual switches in Linux
3
Exempt some devices from NAT
0
IPCOP DHCP not working on green interface with two wireless routers connected via switch
2
Two networks on the same computer - Ubuntu