Drive cannot be mounted automatically, but manual mount is successful

I have an external hard disk that all of a sudden gives an error when Linux Mint attempts to auto mount the thing when it is plugged in. For some reason I see two "External Drive" (the drive's name) labels in Nemo, but both give a similar error when attempting to access them. The only difference being the second drive access error has /dev/sdb2, rather than sdb3 as shown below.

I went to manually mount the thing but was met with something even more strange. The command that worked was:

Which appears to be mounting the drive rather than a partition. I am able to access the entire drive by doing this, but I am unsure why it worked this way. There should be only a single partition on the external, so I am not sure why the following results (shown below) are being observed. If I attempt to mount /dev/sdbX, where X is 1, 2, 3, or 4, I am met with "special device /dev/sdbX does not exist".

Here is the output one gets from fdisk -l, text formatting was terrible, so I'll post an image: 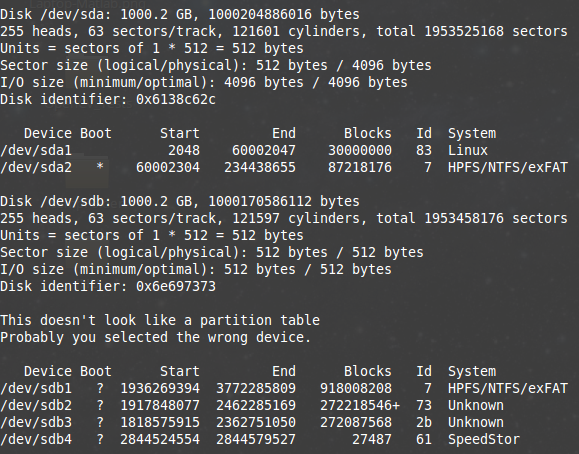 And again from parted -l: 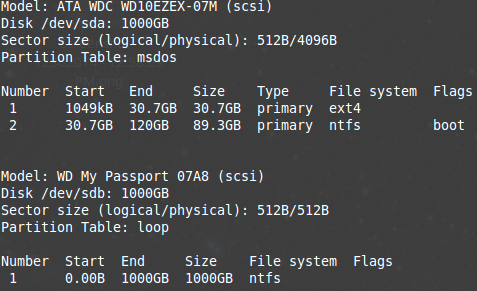 Again, the text formatting due to special characters in /etc/fstab made it illegible.

I never made special provisions to mount this device at a particular point in my directory structure. It simply is mounted as a media device on boot once it is recognized. I did a drive clone recently and following that the drive did not mount on boot any longer.

tl;dr - Drive does not mount as media device (since it is an external HDD with USB interface) after HDD clone from another disk. Also, I must mount the device to the directory structure as mount /dev/sdb /mnt, rather than selecting a particular partition as in mount /dev/sdb1 /mnt. The outputs of fdisk and parted are different, with the former showing multiple partitions that should not exist.

Normally this would work fine with other filesystems, but it seems that the fact it is NTFS has the kernel confused. Instead of recognising the NTFS filesystem and passing over it, it instead recognises it as an MBR partition table and proceeds to create some device files relating to non-existent partitions.

I'm not sure why you don't get an sdb1. Both the start and end of the disk are passed the end of the disk for sdb4, hence it doesn't appear. Presumably the kernel finds some other problem with sdb1 and doesn't create it. You do get sdb2 and sdb3 however.

The workaround is to try to get the rest of the system to ignore the dodgy partitions. To do this, first run the command sudo udevadm info /dev/sdb | grep ID_SERIAL= when the disk is plugged in to find out its serial number, this is everything after the =. Next create a file with the path /etc/udev/rules.d/99-hide-partitions.rules. Put the two lines below in it, and replace xxxxx with your serial number from before.

After saving the file, unplug and plug your disk and things should be ok.

The alternative of course is to reformat the disk and either put a partition table and an NTFS filesystem on it or just use a different filesystem.

This may be the better solution for the long run as presumably the reason for having an NTFS partition is for Windows compatibility. My experience with Windows is that it doesn't like disks with no partition table either (probably the reason why this bug hasn't came up in Linux before). You can check (or maybe you already know) if the drive works with Windows. If this is the case having an NTFS filesystem that doesn't work with Windows on a disk that doesn't work well in Linux probably isn't much use.

Note that if you want a filesystem that plays nicely with both Linux and Windows, a good one to try is UDF.

It would probably be a good idea to report this bug to the kernel developers. What would be useful is a copy of the first 512 bytes of the drive which is misinterpreted as an MBR partition table. It would be useful to reproduce the bug in case it doesn't appear with every NTFS filesystem. To copy the section of the drive do to mbr.bin:

If you want to report the bug yourself, feel free. Otherwise, please post the file online somewhere so that someone here can do it. If you are going to reformat, obviously do this first.

Not the answer you're looking for? Browse other questions tagged linux-mint mount external-hdd or ask your own question.

4
Mounting a multi-partition (GPT/HFS+) USB 2.0 harddrive on Debian
4
Error mounting drives
1
How to finally mount FAT16 USB flash drive
1
Mount .img created by ddrescue-gui
2
Unable to mount FAT32 USB drive in Mint ("is not a block device")
7
Cannot mount sda1: "The device '/dev/sda1' doesn't seem to have a valid NTFS."
0
Mount NTFS-format external USB drive
0
Why can't I mount my optical drive in Linux Mint 19.3
0
Why is VID and PID of a USB device necessary if its mounted via /mount/root?