How can I make text in meld readable?

A few months ago, meld started behaving oddly. Common lines are almost unreadable, and shown as dark grey text on a black background. 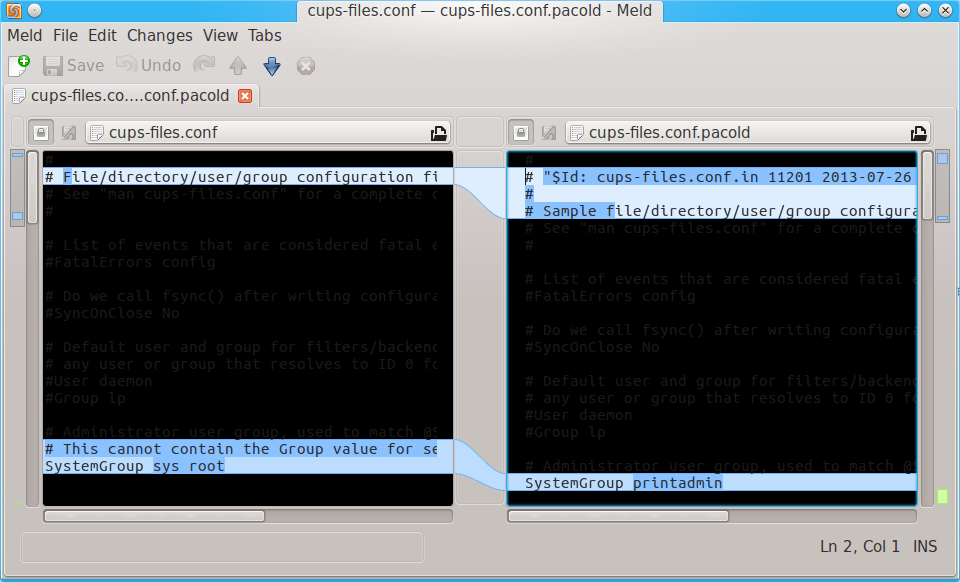 Oddly enough, running it as root is fine (with kdesudo meld), although the theme is less pretty. 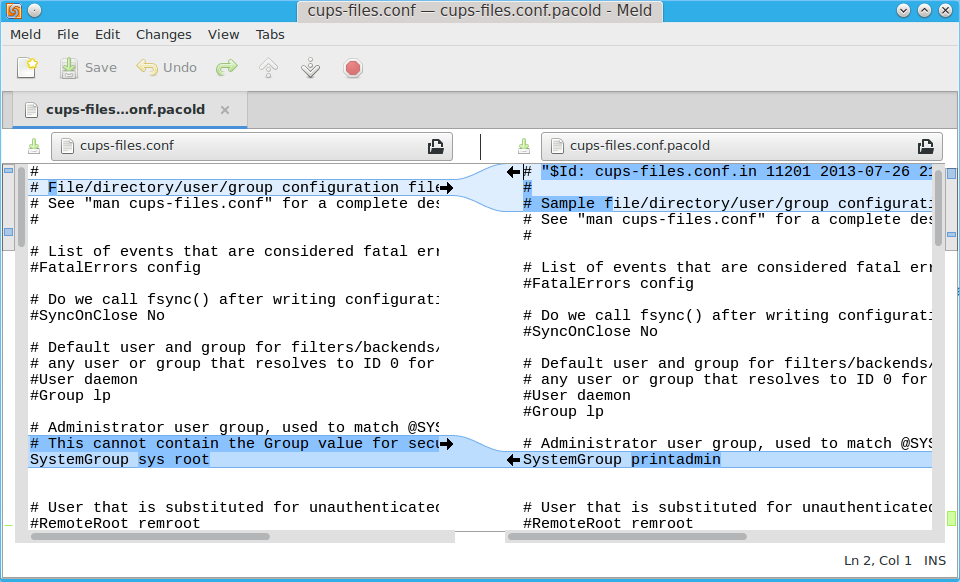 How can I specify the text's colour options for meld?

meld uses GTK3, so I fiddled with System Settings > Common Appearance and Behaviour > Application Appearance > GTK > Select a GTK3 Theme. This change was reflected in meld, but none of the three options I selected changed the text. (The available options were Default, Emacs, and oxygen-gtk; the latter is used in the screenshot above.)

I looked in ~ for files with gtk in their name.

Interestingly, there is nothing with gtk in its name in /root. Hence, I tried deleting some of the ~ files, to see if I could get the same effect for my user. I presume all the gtkrc-2.0 files are irrelevant to meld.

Firstly, I deleted ~/.config/gtk-3.0, but this had no effect, and was recreated when I opened meld.

The only other option appeared to be ~/.kde4/share/config/gtkrc, so deleted this and started meld, which was unaffected. However, the file was not recreated, and it contains some possibly pertinent lines (e.g. text[ACTIVE] = { 1.000, 1.000, 1.000 }). I'm unsure if the (missing) file was loaded at all. I tried kbuildsycoca4 ; kquitapp plasma-desktop ; sleep 2 ; kstart plasma-desktop, but this had no effect. Do I need to manually reload the gtkrc? And why is this file not being affected/rewritten by the system settings?

(Also, FWIW, I removed ~/.gtkrc-2.0-kde4, which was actually a symlink to ~/.gtkrc-2.0, and I also removed the target itself, but that didn't help. Again, I didn't reload gtk (I'm not sure if this is necessary, or possible), and the files weren't re-created when I tried running meld again.)

(Disclosure: I've previously asked this question on the KDE forums, but didn't come to a solution.) 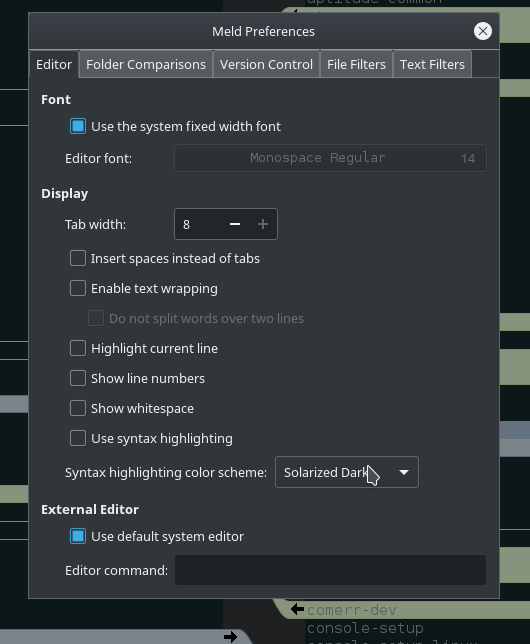 (possibly this change was introduced in earlier versions)

Note:
It is also possible to force a specific theme for Meld by CLI: GTK_THEME=Adwaita:dark meld

It looks like it was a regression introduced in Meld 3.12.1. I downloaded previous versions from the meld website. 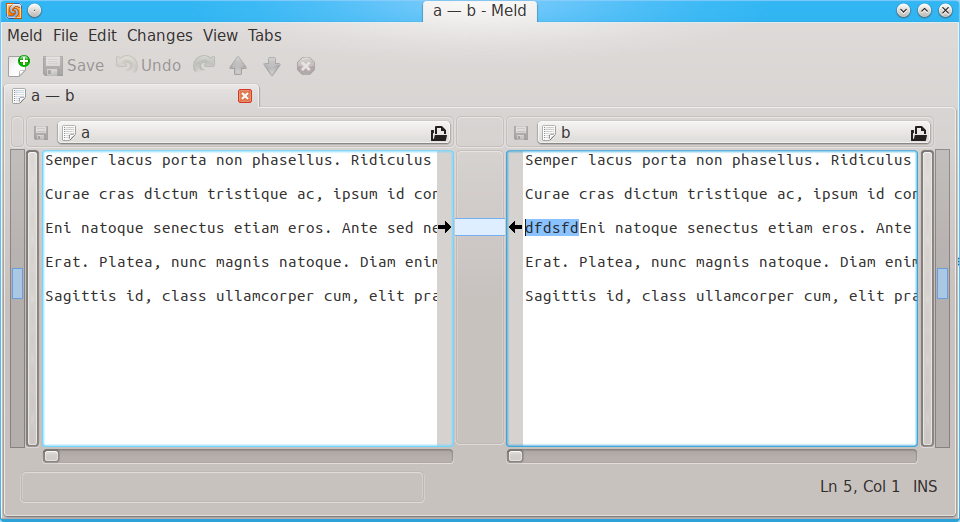 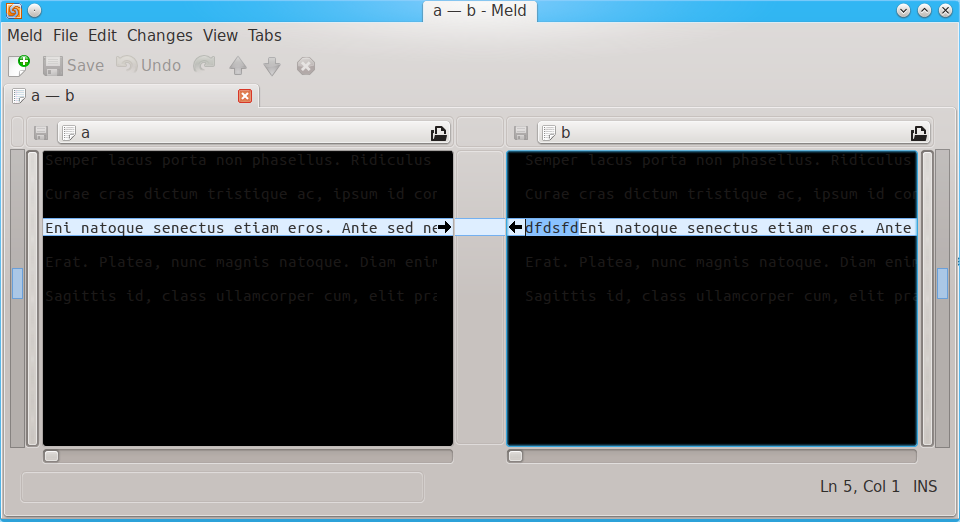 I contacted the devs and they told me that it was indeed a regression introduced in the gtk+ 3 port. They suggested trying the just-released 3.12.3, which now works. (However, it still doesn't fully explain why meld in a new account would work.)

If I do locate -b meld | grep home, I get three directories you haven't mentioned;

The one in ~/.local/share just seems to be a history of local comparisons, but the other two directories have xml files in them. I would try removing those.

If that doesn't work, you can see exactly which files meld reads with something like:

Looking at the output will should hopefully yield something else to investigate.

Failing that I would try creating another user account, logging in and running meld (but nothing else) there. If it displays ok, you could view the dot files/environment variables there and compare them to your own account. Note that you should log in via X and not just use su or sudo so that your desktop environment gets the chance to create the default dot files - this will likely be why it looks plain when running as root.

If none of that works, you could always give up and use Diffuse instead. I haven't tested it properly yet myself, but it does some things that meld can't (no directory comparisons though, so not quite a replacement). :)

For the ones that are different, you could investigate further with, er, Meld. If this doesn't yield anything then there is probably a file that you want to remove which would be hard to find. You could try going back to strace and comparing the outputs from the two accounts.

only leting a update...

The 3.18 version will not show preferences to change your theme.

but by dconf-editor, you can access the meld configuration and set style-chema to 'meld-dark' ... and be happy! 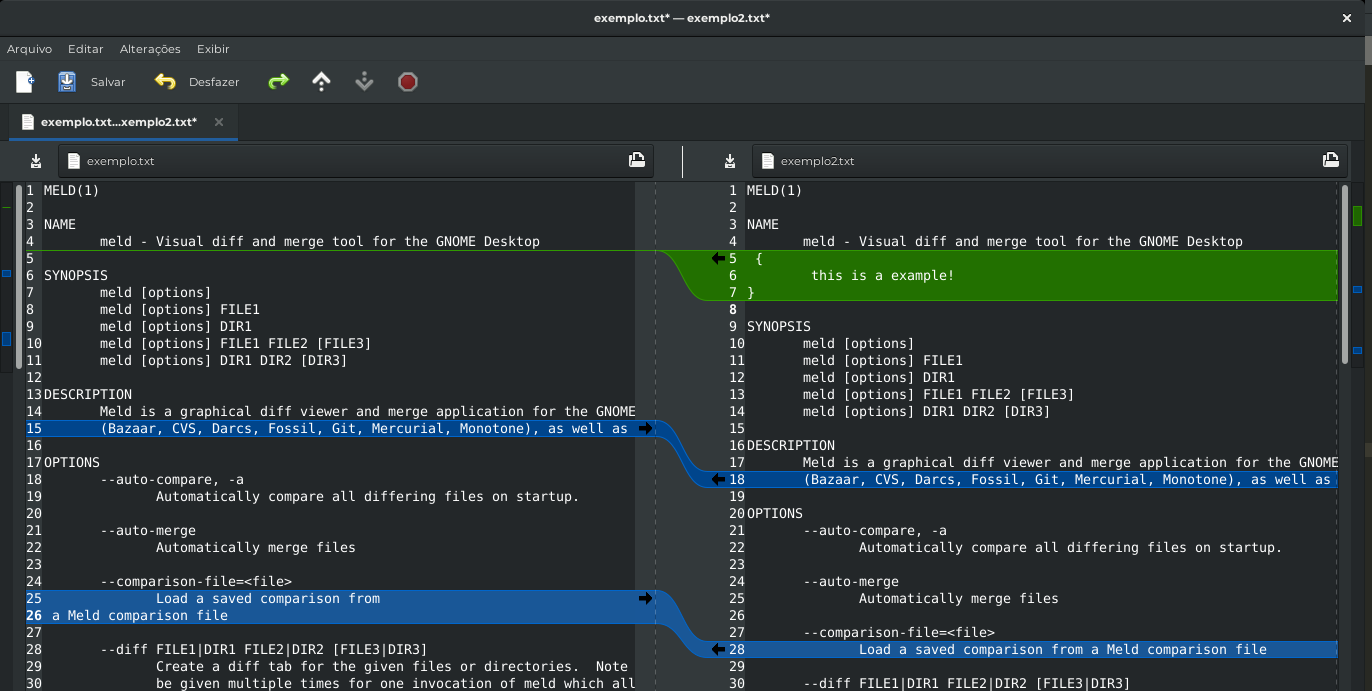 overwrite the meld.css with the one there and you will be able to use Meld with the dark theme https://wiki.gnome.org/Apps/Meld/DarkThemes

Not the answer you're looking for? Browse other questions tagged configuration kde gtk gtk3 or ask your own question.

3
KDE toolbar background messed up
39
How can I use Adwaita Dark for all applications in Gnome 3?
0
How can I make monodevelop render text in KDE?
2
Is there a way to set the QT icon theme, and other theme elements, from the command line?
1
Problems with KDE Plasma after upgrading to Debian 10: too bright and glowy, favorites and panel icons are missing