I've recently jumped ship to zsh and I'm using the Oh my Zsh! theme blinks. It looks very nice in the OSX Terminal, but it looks very bad in Android Studio's terminal.

So my question is is there a way to check that this session has been opened in Android Studio and not in the OSX Terminal and change the zsh theme according to that? 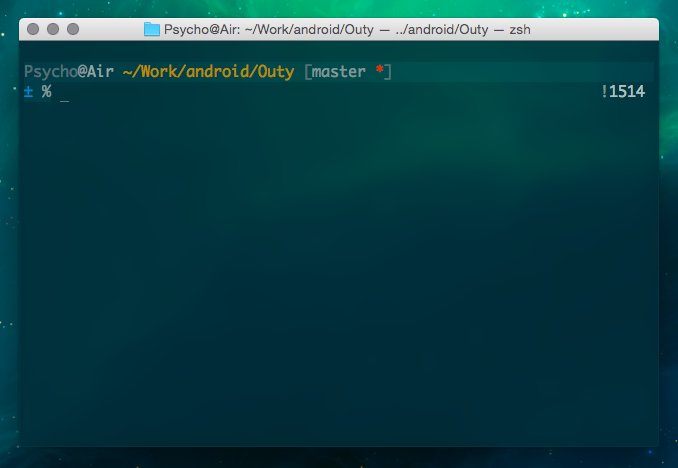 Since no one else has given you an answer, I'm trying despite having completely different software. So this is a generic answer on how to do it with any software. There are two approaches that come to mind:

As an example, here is the difference between xterm and konsole on my Linux box (note: spacing modified to fit on the page):

Some of that stuff is clearly noise from how I launched the two different terminals. But others are not. If I wanted something only in XTerm, then if [ -n "$XTERM_VERSION" ] would seem to be a pretty good way to do that. Similarly, for Konsole, $KONSOLE_PROFILE_NAME would be a good one (and probably a few of the others, too).

A shell knows its own process ID, it can be accessed via $$. POSIX also has $PPID to get the parent PID directly, so I suspect you have that in zsh too. If not, ps can get it for you: ppid=$(ps -o ppid= $$). You can then get the command run, also with ps:

If you need to go further up the process tree, you can use ps to get the parent's parent, etc.

Not the answer you're looking for? Browse other questions tagged terminal zsh theme oh-my-zsh or ask your own question.

1
Colors not rendered correctly in oh-my-zsh themes
1
Installing powerline fonts for zsh + Prezto theme
1
Interactively switching zsh themes while running powerline
1
zsh, oh-my-zsh, change current directory color
1
Choose custom zsh-prompt based on which emulator I use
4
Zsh icons broke in urxvt
3
Keep the whole prompt while clearing zsh terminal with oh-my-zsh
1
What's the difference between ZSH themes, prompts, and terminal based themes?
0
Recovering from a 'corrupt' theme installation on Debian
1
How to set a different ZSH theme when using TTY?