I have an attendance device running Linux OS. I can connect this device via telnet session. There are some files in the device that I would like to download and upload with new files. How can I do that? I have very low knowledge on Linux OS. Would you please help! 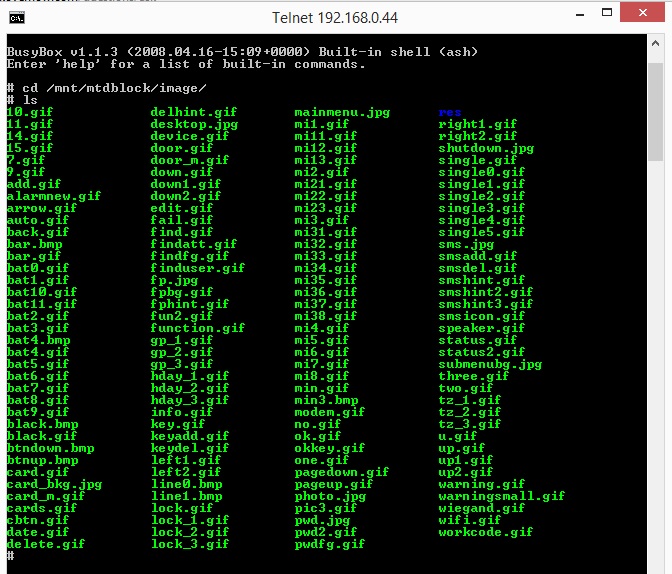 This depends which tools are installed on the client device / supported by the kernel.

Read Simple file transfer and How to get file to a host when all you have is a serial console? for more possibilites.

Copy desktop.jpg from the device to your pc with the netcat/nc method:

On your pc, disable temporarily (or reconfigure if possible) any firewall and run

and on the device

where you need to replace A.B.C.D with the IP address of your pc. As soon as the transfer was successful, the netcat process on your pc should stop automatically. If not, something could have gone wrong and you can stop it with Ctrl+C (compare source and destination checksums to verify).

For the other direction, just exchange < and > on both sides. Make first a backup of the original desktop.jpg (cp desktop.jpg desktop_orig.jpg).

I have no ssh or ftp(or etc) on the device.

Use man rcp for more information in case you want to automate transfers.

By the way, you do know this is very insecure, right?

I just uploaded a ~7 Kb firmware file to a BusyBox based Linux embedded system over the serial port.

No networking, no file transfer utilities; no Base64 utils or anything remotely useful on the device.

On the host, I trivially encoded a firmware into the following format; a kind of hex-dump consisting of shell literals combined with printf commands:

basically shell printf commands with \x escape sequences that printf interprets. On the device I did:

then used the minicom's ASCII file send (Ctrl-AS) to send this file to the host. I could just have used copy and paste, since the amount of data is small.

Then, marked executable and ran the printf script:

Checked using BusyBox's md5sum that the firmware.bin checksum on the device matches the original firmware image on the host.

P.S. The shell double quote syntax passes through \x verbatim because it's not a recognized escape sequence; hence we don't have to double up the backslashes.

@jofel and all others, Thank you very much for your kind assistance. I think device has a customized os installed as it recognized some specific linux commands only. netcat is not recognized by the device. However today I got success to transfer the file using tftp command. I successfully replaced desktop.jpg file with this command. What I did is, created tftp server on window system. login via telnet on device and run these commands:

I have done this now by these methods:

Create ftp server (by installing solerwinds) on window system. login via telnet on device and run these commands:

or to upload file:

I use the following method to download small binary files via telnet into my windows box:

Not the answer you're looking for? Browse other questions tagged linux ssh file-copy telnet file-transfer or ask your own question.

17
Simple file transfer
29
How to get file to a host when all you have is a serial console?

2
Function key mappings in telnet session to Universe Application
1
Best mechanism for logging in and uploading backup files
0
How does a cisco device know if I'm connecting via telnet or ssh?
125
How do I remotely edit files via ssh?
2
Connect via telnet and doing certain operations
0
Interactive shell via telnet
2
How do I stop a telnet session from timing out?
0
Test for network connectivity from various hosts to one specific host via ssh and telnet