How to install Dropbox (and have Dropbox file manager integration) without Nautilus?

Running other desktop environments than Unity or Gnome with a different file manager than Nautilus, it might be a good idea to install Dropbox without Nautilus. But advice on Dropbox involves installing Nautilus too.

Nautilus has conflicts with some file managers, as it takes over the desktop (workspace) and the file manager integration of many programs.

In Xubuntu with Thunar this is a big problem. Also with Cinnamon and Nemo in Linux Mint Nautilus changed the desktop and took over integration with Firefox. But it seemed ok on Elementary OS. Fewer problems on Lubuntu too, if I am not mistaken.

I want to ask for other people's experience on installing Dropbox without Nautilus on various Linux systems and find if there's one single way to do it or system specific ways etc.

Update after answer on Linux Mint.

As I am already using other Linux distros and will in the future, I expect other solutions for a few other distros, DE, and file managers. I will also update my answer to add them if I can.

Installing the Dropbox deb files from the Dropbox website (Ubuntu or Debian, I have not tested others) will not install Nautilus, although gdebi says a Nautilus extension will be installed. Installing just Dropbox from Ubuntu sources in Synaptic or in terminal will neither install Nautilus. File manager integration is also provided in Synaptic (Ubuntu sources) with the packages nemo-dropbox and caja-dropbox, as well as with libnet-dropbox-api-perl.

Un-installing Nautilus works without glitches but there is limited integration with the file manager at this point, maybe opening Dropbox folder from the tray icon, but without Dropbox features in the file manager (folder symbols and menu integration). Tested with Cinnamon and Nemo.

There is nemo-dropbox. "Nemo dropbox is an extension that integrates the dropbox web service with your cinnamon desktop. - installing this package will download the proprietary dropbox binary from dropbox.com."

That should mean that the simplest solution of installing Dropbox without Nautilus for Nemo file manager is to just install the extension nemo-dropbox: that will install Dropbox with Nemo integration. But that is limited to Nemo. 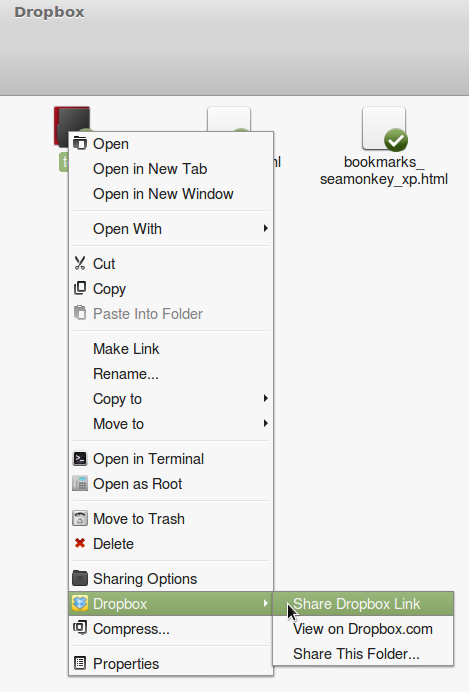 "Caja dropbox is an extension that integrates the dropbox web service with your mate desktop. -- to use this package you need to install the proprietary dropbox package from https://www.dropbox.com/install."

So, you need to have Dropbox before installing this.

As far as I can tell, libnet-dropbox-api-perl is enough in order to have file manager integration (tested with Nemo without nemo-dropbox).

Install dolphin-plugins, then enable the Dropbox service under Configure Dolphin... > Services > Dropbox. This adds the option "Move to Dropbox" for non-dropbox-ed items; inside Dropbox folder it shows this

Check-marks on dropbox items may be absent with icon-sets lacking the proper files at ICONSET/emblems/scalable. Copying the files from a different icon-set will fix this problem.

6
Launching nautilus file browser launches gnome desktop, how to suppress it
0
Possible conflicts beteeen Xfce/Thunar and Cinnamon/Nemo
2
How to avoid a program taking over the file manager when opening a folder in that program from context menu
1
Dropbox - Nemo integration under Fedora
3
Desktop icons gone with nautilus file-manager in Debian 9
1
Make Nemo handle the desktop in (Mint) Xfce
2
What is the Xfce desktop manager - given it's not Thunar? (What is the Xfce equivalent of nemo-desktop)?