service vs. systemctl scripts -- which to use

In Fedora we have 'systemctl' and 'service' scripts. It seems that service internally calls systemctl. So what is the correct/right way on Fedora to start or stop services -- via systemctl or service facility? May be there are nuances to keep in mind?

The way to stop/start services in Fedora (later versions) is using systemctl.

However, there may be a few services left in /etc/init.d/ which you could control with the service command. You can still control them with systemctl as systemd automatically maps them to unit files for you.

For example, on my CentOS 7 (Fedora 19 or thereabouts), there is a /etc/rc.d/init.d/network script which I could control with the service command. If I use systemctl instead, it still works:

As you can see, it has been mapped to /etc/rc.d/init.d/network by systemd and the systemctl command controls it.

I could be so 'last year' and use service instead:

Both work, but note that they do give different results in their status commands.

It's typically the case that the service scripts are redirected to systemctl (Systemd) scripts so it's basically your preference which you want to use.

From my Fedora 20 system.

I generally use both methods, since old habits die hard. But if you're trying to adapt to the Systemd world, I'd continue to force myself to do things using systemctl if possible.

Also Systemd brings everything that you used to do with chkconfig and service under one command, systemctl, so I generally find that easier to cope with in the long run.

This cheatsheet on the Fedora project's website is helpful in making the switch. 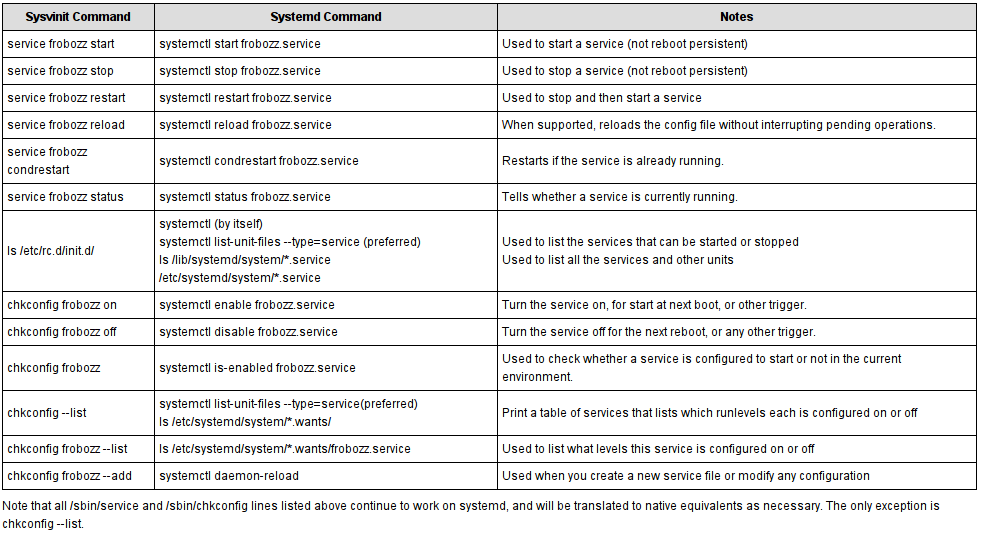 Incidentally, the answer to your original question is answered in a footnote on that page:

Note that all /sbin/service and /sbin/chkconfig lines listed above continue to work on systemd, and will be translated to native equivalents as necessary. The only exception is chkconfig --list.

0
Is there a difference between these two Linux server commands?
2
systemctl fails to accurately report status of daemons if they were started via mechanism other than systemctl
1
service command does not recognize the service file. RHEL6.9
0
Fedora 33 - Run command or script at startup