USB to VGA on Linux

I've been offered a Macbook Pro mid-2012. Although it wouldn't have been my first choice it's still a great piece of hardware, only problem for me is that it only has a single Thunderbolt port allowing me to plug only one external monitor by default.

I use Debian 64-bit on it and I've been looking for solution to add a second external monitor (third total). My only option seems to be using a USB to DVI/VGA adapter. I'm aware of the limitations, it will be for basic coursework and office stuff.

I've been Googling for a while and can't seem to find any reliable information on using these kind of devices on Linux. I'm adventurous so I don't mind getting dirty in config files, although I don't have much experience with these things on Linux.

Has anyone had any experience in getting these to work? Which device would you suggest? Any help/pointers/personal experiences.

NOTE: I'm not asking for information for the particular device linked, my question is mainly, does anyone have any experience in getting any USB to VGA device working on Linux and if so, which device? Perhaps a comment on the particular configurations used, as setting them up on Linux appears to be non-trivial.

If you look at the specs for that particular device it doesn't support Linux.

Does NOT support XP 64bit and Windows Server/Linux

In general USB to (HDMI,DVI,VGA) devices either work or don't. But there are devices that are known to work under Linux, such as this one: UltraVideo® USB 2.0 to DVI-I or VGA Video Adapter 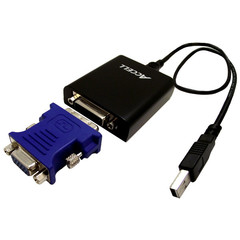 As well as this one: DisplayLink.

Does it work with Linux?

An open source driver is available, for DL-1x5 devices which is now built into the Linux kernel. Linux support for DL-3x00 or DL-41xx is not currently available.

Digging further with respect to the DisplayLink technology had this to say on the Wikipedia page:

The Linux kernel 3.4 also contains a DisplayLink driver, but current generation USB3 chips are not supported as of Sep 2014. It looks like no current DisplayLink-chip will ever work under Linux [17] due to intended encryption.

Here's another option: Plugable UGA-2K-A USB to VGA/DVI/HDMI Adapter for Multiple Monitors up to 2048×1152.

The Pluggable website even has a page devoted to Linux, titled: DisplayLink USB 2.0 Graphics Adapters on Linux – 2014 Edition. The article had this to say on the issue:

Multi-monitor on Linux, especially with multiple graphics cards and USB graphics adapters, remains problematic. You can find many distros and configurations where it just won’t work. We’d recommend staying away unless you’re an advanced Linux user who is willing to play with different distros, install optional components and do hand configuration. Unfortunately, it’s just not plug and play yet today, as it is on Windows

That said, it is possible to get things working in limited scenarios for USB 2.0 generation DisplayLink-based adapters. We used all Plugable products in the tests for this post. Our test systems included Intel, Nvidia, and AMD primary graphics adapters. For Nvidia and AMD, we tested both the open-source and proprietary drivers.

Intel is the most compatible, providing decent results under all configurations. Nvidia graphics cards, when running the open source nouveau driver, only work in Multi-Seat mode. Attempting multi-monitor setup with a DisplayLink adapter and an Nvidia graphics card results in garbage graphics being displayed on your DisplayLink-attached monitor. The Nvidia proprietary drivers do not work under any scenario.

The AMD open-source drivers work under both multi-seat and multi-monitor setups, but the performance, at least in our tests, is significantly worse than with the Intel drivers.

The AMD proprietary drivers are unavailable in any easy to install package under Fedora 20, but we installed them in Ubuntu, and were unable to get any results, they simply do not work with DisplayLink graphics..

As I've shown, it isn't a simple answer, it's very hit or miss, which devices will work with which particular distros of Linux. If it were me, I'd likely go with option #3, but your mileage will vary. Also, prepare yourself for spending a fare amount of time messing with options to get things working, or potentially having to switch to a different distro.

We don’t recommend or support USB graphics on Linux yet, because of the problems above — but if you do have questions, please feel free to comment below. We want to get as much information out as possible about what works and doesn’t, so things can improve here. There’s no reason Linux can’t have the same or better multi-monitor support as any other platform in time!

This Phoronix article may also be of use, titled: Apple Thunderbolt Display Presents Problems For Linux.

Thunderbolt can be daisy chained that is true but the issue is quite complex: the physical port can operate in two logical modes, one is DisplayPort and then you can plug in a single DisplayPort 1.2 monitor. In this mode, the cable carries a DP 1.2 signal and that's it.

Alternatively, you can operate the port in Thunderbolt mode. In this mode, the cable carries a PCI Express and up to two DP 1.1a (mind the version) signals. You can daisy chain two Thunderbolt monitors which will internally demultiplex the DisplayPort signals just fine. You can also daisy chain two Thunderbolt docks, each demultiplexing one DisplayPort signal. Docks with a Thunderbolt passthrough and a DP port are rare; usually only a HDMI connector is provided. AFAIK only the upcoming ZenDock has both an mDP port and a TB passthrough. I've never ever seen a Thunderbolt dock offering the option to connect two displays -- this would essentially be two docks internally and the cost would be also close to double so no wonder this is not a popular option.

Should you want to drive more than two monitors, you can add a graphics card to a Thunderbolt-PCI Express dock. Remember, TB can deliver PCI Express signals. Now you can add as many monitors to this single dock as your graphics card allows. Many nVidia cards (based on Kepler or newer chipset) support four. If your laptop panel and the external monitors are driven by the same driver (ie. nvidia both or ATI both) then in theory this should work without much problems -- but see the next paragraph.

Linux 3.17 added support for hot-plugged Thunderbolt devices (if they are not chained!). It is less than two months old at the time of this writeup so experience is scarce.

To sum up: if you connect two TB displays or two TB docks are boot-up time, that is ought to work. If you connect a graphics card of the same make (in your case, an nVidia chip) in a TB-PCIe dock at boot-up time that is also ought to work and allow up to 4 displays. If you are running the latest kernel then it is not impossible that the latter even works hot-plugged.

Not the answer you're looking for? Browse other questions tagged debian usb macintosh multi-monitor vga-cable or ask your own question.

1
"cannot find crtc for output VGA-0" from xrandr
13
Linux Mint - Not detecting monitor connected via USB-C to HDMI hub
0
Debian: could not get screen information
2
My laptop display is not working after login screen in Linux mint. What can I do to get it back?
0
USB-C monitor stopped working after LUKS install
0
Debugging a connection problem between Linux and monitor