How to open terminal, split to 9 terminals and switch between them using one script?

I would like to open a terminal, split it to lets say 9 parts (3x3) and execute some bash script. But for each terminal part different script.

Can this be done using perl, python or even bash?

How can I switch between those little terminals without using keyboard shortcuts?

Oh, by the way, I'm using terminator. And if there is some other terminal emulator that enables such a functionality, which is it?

To plagiarize myself, you can set up a profile with your desired settings (instructions adapted from here):

The final result is that when you run terminator it will open with 6 panes, each of which has run or is running the commands you have specified: 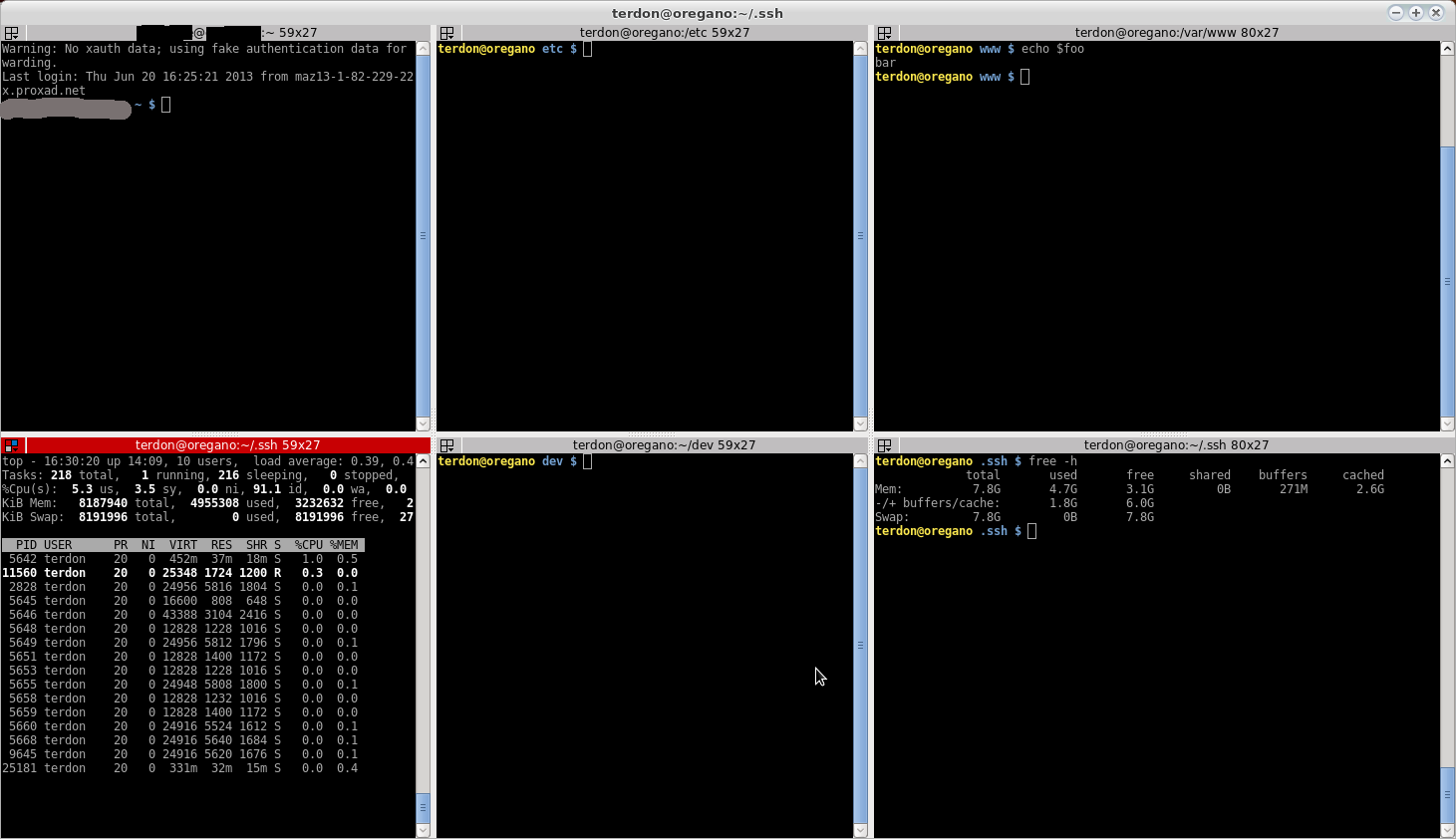 Also, you can set up as many different profiles as you wish and either launch terminator with the -p switch giving a profile name, or manually switch to whichever profile you want after launching.

Are you searching for terminal multiplexer tmux.

Back when I was using terminator this is the rc file that I used to open a bunch of terminals and run applications. Save it to .config/terminator/config.

EDIT: Note that this information probably came from Terdon's post on a much earlier thread. I've been using this setup for a few months, but Terdon's post here looks very familiar!

Not the answer you're looking for? Browse other questions tagged bash shell-script terminal perl gnome-terminator or ask your own question.

1
Can I open terminator with one windows with bash and another with fish?
300
How to split the terminal into more than one “view”?
48
How do I run the same linux command in more than one tab/shell simultaneously?
1
Switching between terminals in a shell script

627
Preserve bash history in multiple terminal windows
5
Difference between the terminal file and the terminal screen
4
vi setting for new window
1
Emacs: Switching automatically to char-mode when switching to an ansi-term window
1
How to create cross-platform keyboard bind commands?
0
Bash script for copying text currently entered to prompt
5
Launch a new terminator window with a keyboard shortcut without starting a new process
1
Switching between terminals in a shell script
1
How run .bashrc command after terminal session completely loaded?
1
How to rename terminal window from a bash script?