I've been struggling with installing Solaris 8 Sparc-32bit on Qemu for a while. So far I've viewed several sites with instructions on how to install Solaris-sparc32bit on Qemu. But only yesterday was I successful. Anyway, I downloaded and compiled the latest (3 weeks ago) of Qemu and obtained the ISO of Solaris 8 from my friend.

I was able to successfully install Solaris8.

I used this command to start the installation:

The problem is the OS does not boot up as it should. When I run the above command here's the output that i receive:

Then I use TigerVNC to view using the command:

After that I get the QEMU gui. Here's a sample of the initial output: 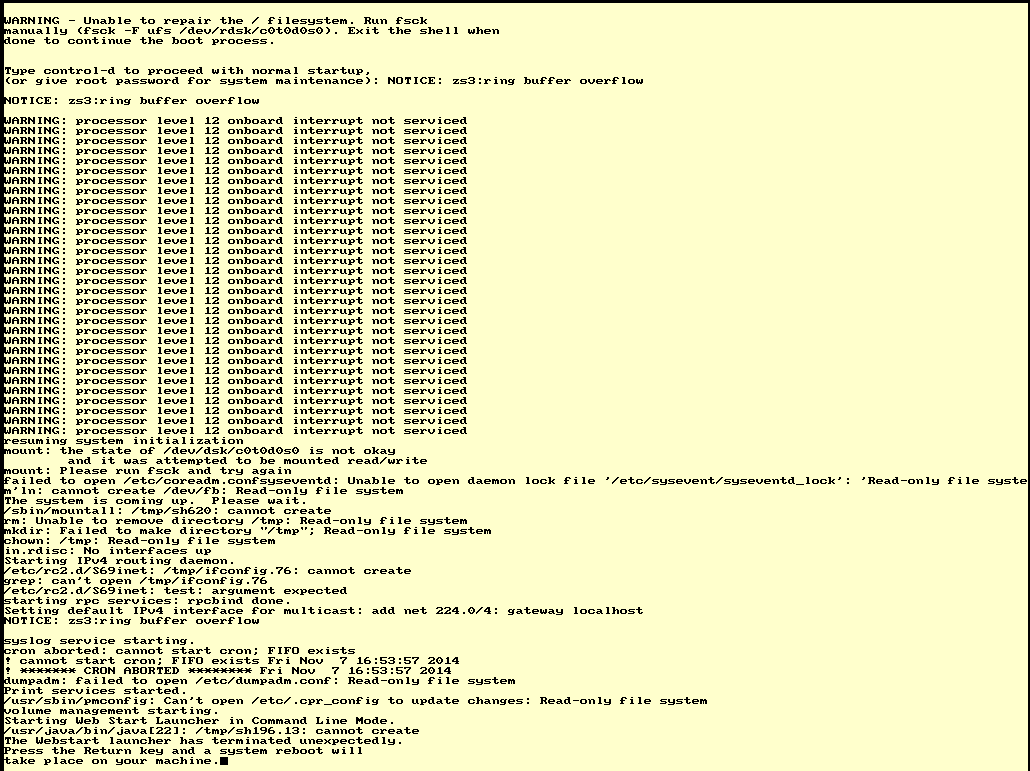 The command prompt ask the user to press Return and the system will reboot. However, after pressing return the system just prints out a single line error message forever (basically like a loop that runs forever). So I don't have a chance to see the error line and post it here.

This means QEMU would have used OpenBIOS instead of the Sun OBP ROM used for the installation which have different device trees that may confuse the OS. I would highly recommend sticking with one particular ROM for both installation and use.

If you want a graphical console with the Sun OBP ROM image then you need to boot like this:

That should get you a plain framebuffer which is enough to boot into the Solaris 8 XWindows installer.

I believe the issue with Java not starting is until under investigation.

1
Solaris SPARC 10 32bit mode
1
Can you mount UFS partitions made in Solaris (Sparc) on Solaris (x86)?
0
How to install Solaris 11 on Sparc Enterprise T5240 from HyperTerminal
1
Sparc Solaris - install optimised GCC 4.9, 32/64 bit?
1
QEMU can emulate SD card from Linux but not from OSX
0
Compiling Apache 2.4.10 32bit on Solaris sun sparc 10 64bit
5
Booting Solaris 10 or 11 for Sparc in qemu-system-sparc64
2
Break key for solaris sparc with serial terminal
2
Running a Solaris binary on SPARC without SPARC hardware