In the past I have used Virtual Box which has very good support for sharing a folder on the host with a Windows guest. I am looking for similar functionality for QEMU.

The documentation suggests to expose a Samba server running somewhere in the network, or use the -net user,smb=/path/to/folder to start a samba server.

I had no luck with the -net user,smb option of QEMU. All it does is starting smbd (which conflicts with another service running locally due to a port conflict). Suffice to say, this is unusable, especially with multiple guests in mind. (For Linux, -virtfs (Plan 9) can be used for easy folder sharing.)

Other problems with Samba is that it is not limited to folder sharing, it also does printer sharing, user mapping and whatsnot. All I need is to share one (or more?) folders with the Windows guest.

Does there exist an alternative folder sharing method for QEMU that works with a Windows guest?

Or is there a way to configure Samba to restrict itself to a very limited set of features and integrate it into QEMU? It should:

The not-functioning -net user,smb option was caused by an incompatibility with newer Samba versions (>= 4). This is fixed in QEMU v2.2.0 and newer with these changes:

(Debian has backported the latter two patches to 2.1+dfsg-6 which is present in Jessie.)

When QEMU is successfully started with these options, a new /tmp/qemu-smb.*-*/ directory will be created containing a smb.conf. If you are fast enough, then this file could be modified to make paths read-only or export more folders.

The samba daemon is executed whenever ports 139 or 445 get accessed over a "user" network. Communication happens via standard input/output/error of the smbd process. This is the reason why newer daemons failed, it would write its error message to the pipe instead of protocol messages.

Due to this method of operation, the daemon will not listen on host ports, and therefore will only be accessible to the guest. So other clients in the network and even local users cannot gain access to folders using this daemon.

Since QEMU v2.2.0 printer sharing is completely disabled through the samba configuration, so another worry is gone here.

The speed depends on the network adapter, so it is recommended to use the virtio netkvm driver under Windows.

Also note that the daemon is executed by its absolute path (typically /usr/sbin/smbd) as specified at compile time (using the --smbd option). Whenever you need to try a new binary or interpose smbd, you will need to modify the file at that path.

Executables (*.exe) must be executable on the host (chmod +x FILE) for the guest to have execute permissions. To allow execution of any file, add the acl allow execute always = True option to a share.

Example read-only smb.conf configuration which allows execution of any file (based on QEMU v2.2.0):

In 2018 a simple way to share a folder between a Linux host & Windows virtual machine is to enable RDP in the Windows guest & connect to the vm with the Remmina Remote Desktop Client & enable a Shared Folder: 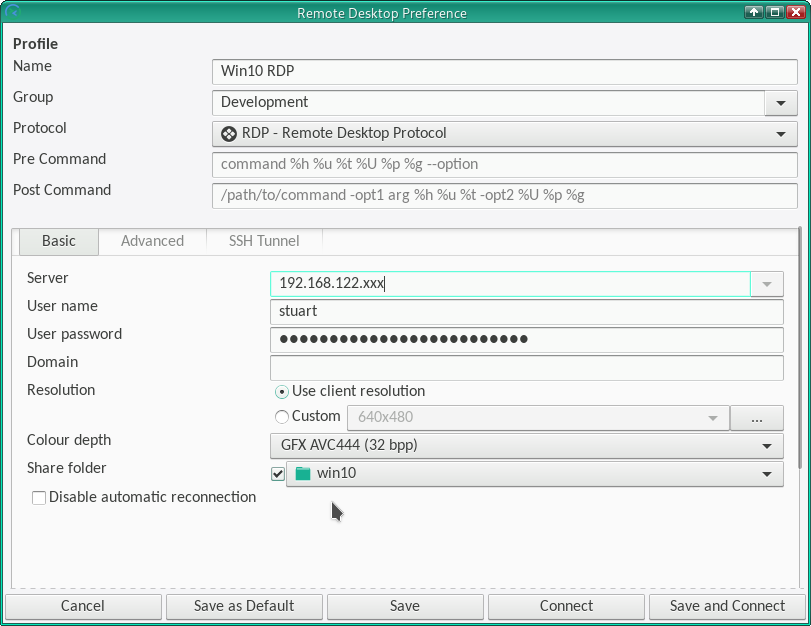 This creates a folder under This pc (shared folder on Linux hostname) & a \\tsclient\shared-folder-name network share inside the guest. You can also map a network drive: 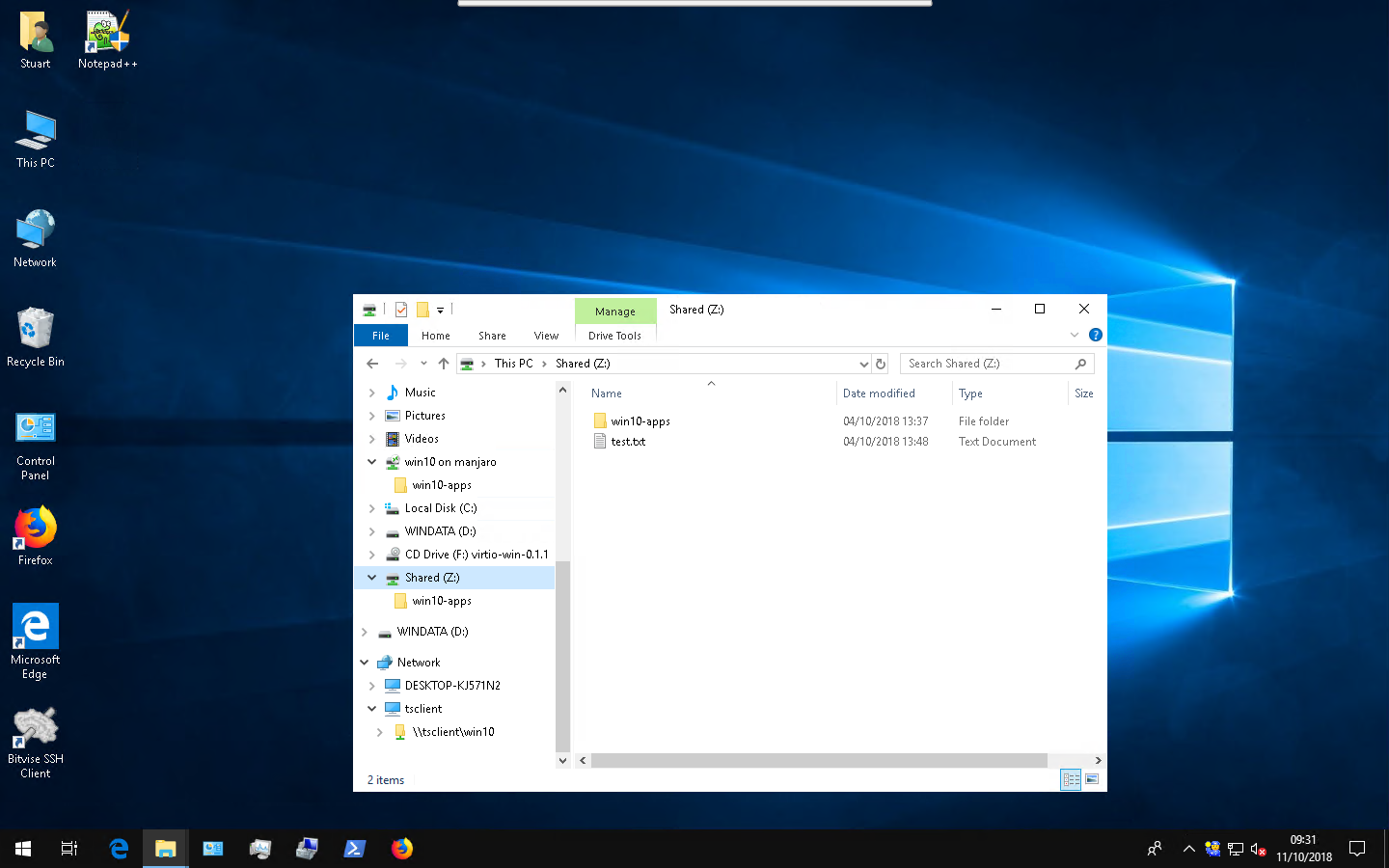 Not the answer you're looking for? Browse other questions tagged windows samba qemu file-sharing or ask your own question.

3
How to mount a linux host filesystem with FreeDOS running in qemu?
2
How to share a folder in libvirt+qemu/kvm with Linux guest and Linux host?
2
Debian 9: How to set up Samba-Exchange between QEMU-Host and QEMU-Guest (Windows)?
0
Shared folder in QEMU between Windows Host and Debian Guest

1
Samba Shared Folder
1
Use QEMU Guest Agent with Windows guests and Virt-Manager
2
Debian 9: How to set up Samba-Exchange between QEMU-Host and QEMU-Guest (Windows)?
3
How to mount a linux host filesystem with FreeDOS running in qemu?
0
QEMU/KVM: How to configure a writeable shared folder for guest, which itself is a CIFS mounted network share on host?