Why is the Scroll Lock key disabled in Cinnamon/Linux/Xorg?

I recently purchased a backlit keyboard that was designed such that the Scroll Lock key was used to toggle the back light. I quickly found that Cinnamon does not respond properly when the Scroll Lock key is pressed. Originally, I thought the keyboard backlight was DOA because everything else worked out of the box. After a reboot I found that before launching Xorg I was able to successfully toggle the backlight using the Scroll Lock key. Then, once again, after starting Xorg (and consequentially cinnamon_session), this functionality stopped working once again.

In order to get the backlight working after launching Xorg I was forced to issue a: xset led named "Scroll Lock" to enabled and disable this functionality.

After a bit of research I came across a program called xev that dumped key event information to the terminal after it was started. Upon pressing the Scroll Lock key the terminal was populated with this information:

So I know the key event is being sent to the kernel.

Also, interestingly, I observed strange behavior when in the terminal (still prior to launching Xorg or Cinnamon) and using Scroll Lock. Namely, at this point my backlight was toggling as expected, but when Scroll Lock was enabled nothing I typed was written to the screen. After disabling Scroll Lock everything I had written was immediately dumped to the terminal as if it was previously being buffered.

tl;dr What is the deal with Scroll Lock and Xorg?

I'm not familiar with Cinnamon, but it should be possible to enable your Scroll Lock key.

First, we need to see if you have a spare keyboard modifier slot. Run:

That will print a list of your current modifier setup. Hopefully, one of those lines won't have any keys listed; generally that will be mod3. Assuming that's the case, you can enable Scroll Lock with this command:

If that works, you probably want X to do that automatically whenever it starts. There are various ways to do that: it can be done on a per user basis, but for something like this I think it makes sense for it to be set globally.

But I've never done this before myself, so I'd better test it before giving further details. :)

OK. The method I tried to activate that modmap globally doesn't work for me on KDE. :( But activating it in my home directory seems to work OK.

Create a file called .Xmodmap in your home directory containing this line:

The easiest way to do that is:

Found the permanent way after a long night up with lots of half baked solutions.

Add the following line in the xkb_symbols "basic" { section. do not worry if that second line is not there, it is only there for some languages and was not there for us on my system.

Also, there is a cache where xkb layouts live. You should clear it before restarting your X server to check the new keyboard symbol file(s).

As Scroll Lock may interfere with your keyboard shortcuts when active (named F12, Ctrl+Space won't work as expected), I decided to match the Scroll Lock key to a manual launch of xset, toggling the LED state regarding it previous state.

This parses the output of xset q, matching the line with LED mask.

Note 1: If doesn't work for you, please verify with xset -led; xset q | grep 'LED' what is the current mask value.

Note 2: Some users need to run xset led 3 to activate the light. In this case, please rewrite above script.

Then you can launch this script as Custom Shortcut using your Desktop Environment like (here is with a Cinnamon): 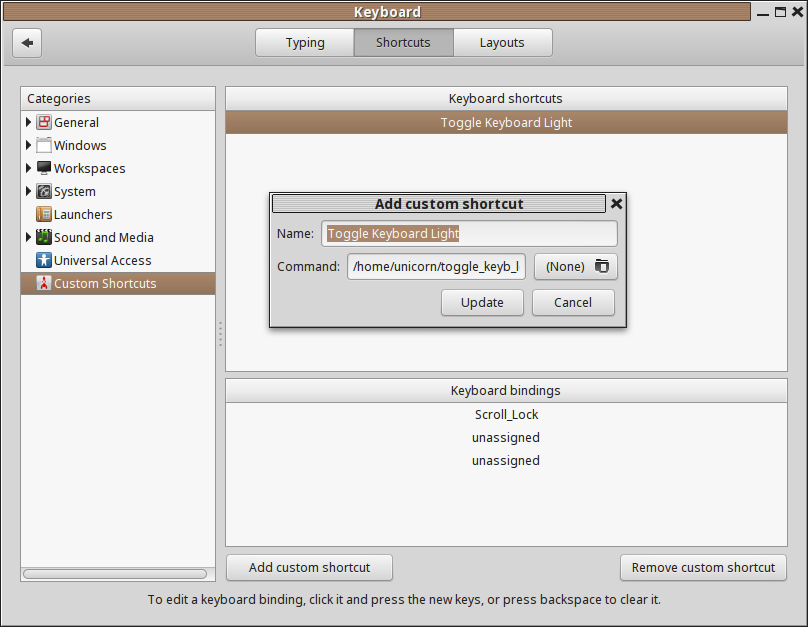 Not the answer you're looking for? Browse other questions tagged arch-linux xorg cinnamon or ask your own question.

4
How can I use the scroll lock key to toggle the back light on my keyboard?

13
Reassign Ctrl and Alt keys - xmodmap 'BadValue' error
0
How to install Cinnamon with SLiM on Arch Linux?
16
Scrolling with a WACOM tablet pen
2
How to activate the password prompt on Linux Mint Cinnamon lock screen?
4
How can I use the scroll lock key to toggle the back light on my keyboard?
2
How to edit lock screen Cinnamon?
6
Solution to Frozen Lock Screen: Linux Mint Cinnamon 18
0
StructureNotifyMask interferes with other windows on linux Mint
3
xorg high CPU usage on Linux mint Cinnamon i7-7700k + Nvidia GT730 4gb
1
Linux Mint Cinnamon - Play A Sound On Lock?