What is '"^[b" backward-word' When trying to configure ZSH?

I am on a MAC, and I am trying to figure out shortcuts for my ZSH running on Iterm2.

When I type bindkey in the shell, I see (among other mappings), the following:

^ is usually control, but ^[ actually means Escape or Alt (or meta, if you like emacs).

So you can press Escb or Escf for those key combinations. 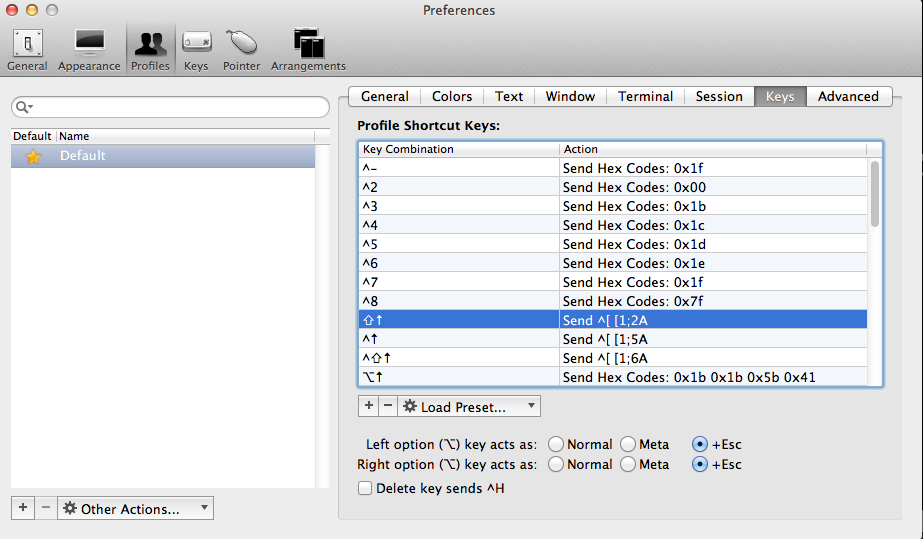 Actually ^[ is the Alt key. So in your case the terminal (Iterm2) uses Alt + b and Alt + f to go backwards and forwards a word. This is controled by your terminal and has nothing to do with zsh.

Indeed ^[b is ESC+b or (Meta/Alt+b). You can display character literally by proceeding it with Ctrl+v. In this case you will find the following:

Additionally you will find in zsh manual:

The ^ notation is commonly used in the GNU world for control characters, where ^a is Ctrl-A (ASCII 1 where A is ASCII 65). In other words it is shorthand for "use the character 64 slots before this on".

In order to accomodate the many keyboards without a META key, a convention of "ESC means that the next character is to be considered pressed with the META-key". Therefore in GNU Emacs, pressing ESC-f moves the cursor a word forward.

Note that these days it is very rare that Ctrl-[ gives an ESC character, but it may be lurking in some other Ctrl-combination. For instance is ^^ still used in telnet sessions to escape to command mode, so it is useful to be able to find it.

2
What does the `set -- $args` line do here, and why does it behave differently between Zsh and Bash?
1
What causes this behavior when defining a function named ':'
1
zsh yanks only last cut word
4
Keep the whole prompt while clearing zsh terminal with oh-my-zsh
2
How to key bind 'backward-kill-line' to Ctrl+Shift+Backspace?
1
`/etc/zshenv` runs twice for interactive, non-login shell in iTerm2
1
How do I figure out what just broke my zsh shell beginning-of-line and end-of-line bindings?
1
Move to Midline in Terminal?
2
Option Arrow keys for moving cursor by word for file paths in terminal (macOS Catalina) in zsh
3
How to get a fuzzy xdg-open with fzf in zsh?