If I do the following commands:

I assume this is because copy2.jpg has had each of what cat thought were its line endings replaced by a ^M, and each ^M is bigger in size than a line ending. Is this correct?

If then do cat copy2.jpg, I find that there are no instances of ^M in copy2.jpg.

What's going on here? And can cat be relied upon for joining files perfectly using >, if its output can be different from its input?

It's not just ^M. Every byte with a non-printable character (whatever that means in your current locale) will be expanded to a multiple-byte printable equivalent under cat -v.

If you're using cat to join files, you need to avoid every option that modifies the output: -b and -n (number lines), -E (mark line endings with $), -s (suppress repeated empty lines), and -v and -T (display non-printable characters using printable characters).

Your analysis sounds correct to me. I would use cat to join files, since that's its primary function. Just do so without the -v switch, or any switches for that matter.

Using cat -v .. on the file has essentially trashed it. Did you try and open it in an image viewer? I tried your method and that's exactly what happened to mine.

You can see the evidence of this using the file command too:

If you open your copy2.jpg file in say vim you'll see that it's littered with them, for example: 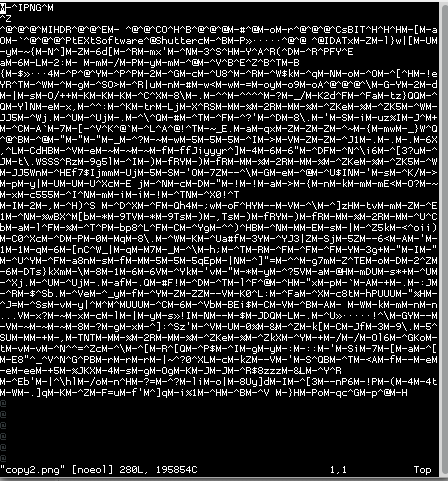 Not the answer you're looking for? Browse other questions tagged cat or ask your own question.