I would like to find out how do I apply the fix for this vulnerability on cygwin.

I tried apt-cyg but it didn't update anything:

when try to reinstall by running setup-x86_64.exe and going through wizard re-install bash that is showing under shell, it seems like start downloading everything. It should be very quick update but it start downloading for over 15 minutes then I canceled it. I looked around https://cygwin.com site and other forum but so far not any specific update for this vulnerability.

As per the official Cygwin Installation Page:

Installing and Updating Cygwin for 64-bit versions of Windows

Run setup-x86_64.exe any time you want to update or install a Cygwin package for 64-bit windows. The signature for setup-x86_64.exe can be used to verify the validity of this binary using this public key.

I had a hunch this bash was affected to, so about 15 minutes before you posted your question I did as the setup page instructed.

There is no need for a 3rd Party Script. I believe the process went different for me because I had not cleaned out my Download Directory at C:\Cygwin64\Downloads The setup utility Scanned my currently installed packages, and I left the defaults alone. As such, all packages in the base system were updated. One of these happened to be the bash that is affected by the CVE-2014-6271. You can see proof that you are protected by the following screenshot: 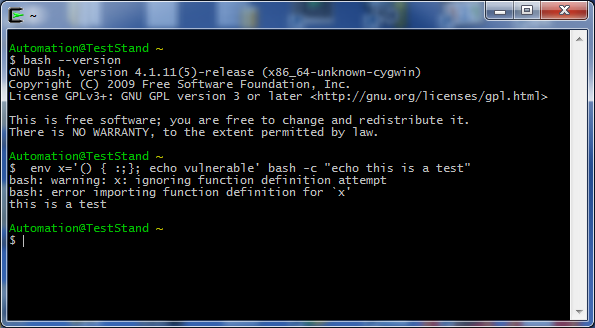 Please note that I do not know if this update protects against the other vulnerabilities that have been discovered, so please follow the above procedure the next few days until this issue is completely fixed.

This looks like the version that patched shellshock (Subject to other bug variations / patches.) for cygwin bash:

" This is a minor rebuild which picks up an upstream patch to fix CVE-2014-7169 and all other ShellShock attacks (4.1.13-6 was also safe, but used a slightly different downstream patch that used '()' instead of '%%' in environment variables, and which was overly restrictive on importing functions whose name was not an identifier). There are still known parser crashers (such as CVE-2014-7186, CVE-2014-7187, and CVE-2014-6277) where upstream will probably issue patches soon; but while those issues can trigger a local crash, they cannot be exploited for escalation of privilege via arbitrary variable contents by this build. Left unpatched, a vulnerable version of bash could allow arbitrary code execution via specially crafted environment variables, and was exploitable through a number of remote services, so it is highly recommended that you upgrade... "

I also had to remove my cygwin download directory before I could pull a newer version of bash via the setup-x86_64.exe. :( So verify with "bash --version" to confirm your patch level.

However, we might not be out of the woods yet...

" CVE-2014-6277 & CVE-2014-6278: Security researchers discovered two additional bugs. These two bugs are supposed to have the potential for arbitrary command injection, similar to the original Bash bug. However details have not been made public yet, in order to allow appropriate patches to be created. "

Sigh. Looks like we need to keep a good eye out and keep patching BASH for a bit longer. However you are likely much better at (and after) bash 4.1.14-7 under cygwin.

Not the answer you're looking for? Browse other questions tagged bash security cygwin shellshock or ask your own question.

1
How to run bash on CYGWIN
123
When was the shellshock (CVE-2014-6271/7169) bug introduced, and what is the patch that fully fixes it?
19
How was the Shellshock Bash vulnerability found?
0
Bash isn't reading (source) .bashrc in AIX
4
Why isn't the most recent version of Bash being used?