Git pager is less, but what is causing the output coloring?

less itself isn't capable of doing syntax highlighting, according to this thread.

However, git diff nicely shows colored output in less, its default pager. When I redirect the output of git diff into a file, no color escape sequences are visible.

Does git diff know where it's being sent, and formats the output accordingly? How would one do that?

I just noticed that git colors the diff output (e.g. git diff), however, it doesn't know how to syntax highlighting in general. e.g.

Reading the git sources, I found the following hints

I was previously referring to syntax highlighting, but that was not correct. What I mean is output coloring, see e.g. 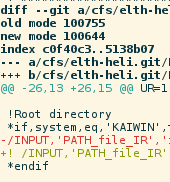 Git uses isatty() to check whether stdout is a tty: this is used to see if a pager must be used (pager.c) as well as colors (color.c).

Damn I found it in git's color.c file:

You could use Pythons pygmentize to do the highlighting and pipe it in.

Not the answer you're looking for? Browse other questions tagged colors git diff pager colordiff or ask your own question.

5
Colored text set up with PS1 and colored output from commands mess each other up
46
How do I pipe colored diff output to less?
7
How to highlight logs with bash coloring on vim?
22
What is a pager?
2
Busybox pager with color capability?
5
Diff patch output saved to a file. How to see it syntax-colored?
1
Git status: Coloring deleted files
4
Color-coded git diff -> less doesn't properly show color
0
Kubuntu: how to disable color in output of 'watch' command