My friend is having problem in trying to call make to compile an application which both me and a second friend have previously successfully compiled.

Part of the compile process when we call make install in the Makefile directories of our project consists in calls to such "linux-devkit files". When I or my second friend call the command in the Linux terminal, everything runs fine to the end. But when my friends do it, an error message appears:

(Note: translated from a Portuguese Ubuntu)

After doing countless tests we did managed to find an interesting difference: if we go by Terminal to the ~/linux-devkit/bin folder and call arm-arago-linux-gnueabi-gcc in one of the two working systems, the answer is one that essentially tells the file was found, but command specifications are lacking:

and this was a expected error message. But when my friend with the problem executes the same command, the error message is:

(Note: translated from a Portuguese Ubuntu)

It is as if the Terminal simply wasn't finding the file to use it, even tough it appears when ls is called as well as when using Nautilus!

Or user-permissions for those files are 100% equal, so it can't be a problem there. Does anybody have any guess on what's going on?

Here is the answer I got, Volker Siegel:

Thats is output, thanks for help.

A Print Screen to complement: 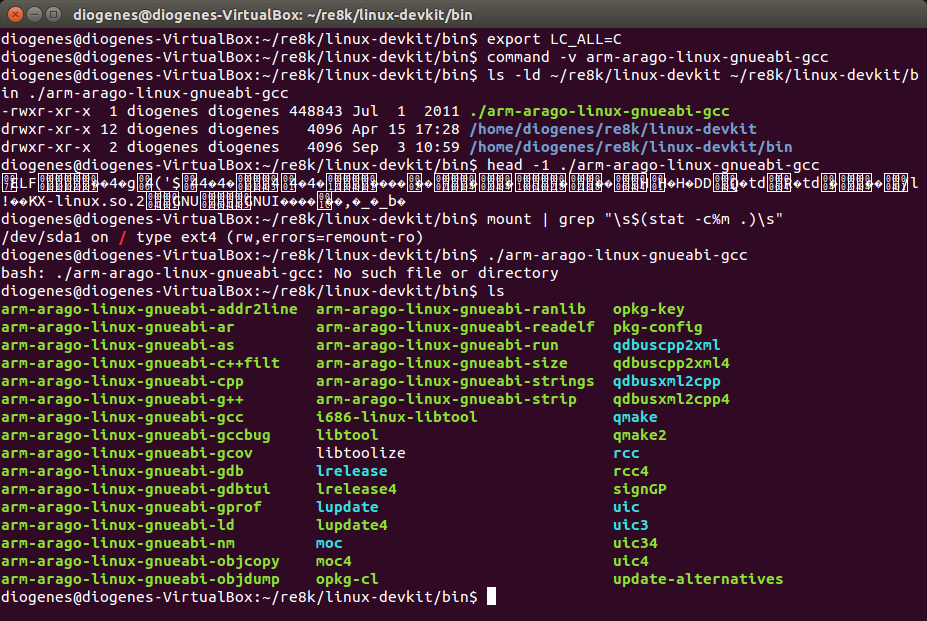 When Volker Siegel suggested problems with libraries, a correspondent that also works with Linux told us that he had the same problem and the cause was precisely that some libraries were missing.

We run the sudo apt-get install ia32-libs on Terminal as suggested by Volker, but the system reported that this lib wasn't available anymore, suggesting we should maybe install this other libs:

After installing them, the problem was solved.

Take a look into the file arm-arago-linux-gnueabi-gcc:

The interpreter is defined in the first line of the file, like

If the problem is not obvious just from looking at the script, please provide more details;

Best add the output of the following commands to the question - just a few lines:

(The first line it to get english error messages in this shell, the last command shows the file system and mount options for the partition that contains the directory.)

Not the answer you're looking for? Browse other questions tagged bash filesystems terminal or ask your own question.

4
Terminal: termcapinfo command not found
1
How to skip a file with a specific file extension if there is another file (with another extension) with the exact same filename?
10
Cannot exec /bin/false: no such file or directory
1
Reset $PATH Variable to Default Kali setting
14
How does the exit command work on a Unix terminal?
0
SFTP download from terminal is fine, via script not working
1
Can't change PS1 value in Gnome terminal v3.28.1 (Linux Mint 19.2 with Cinnamon)
0
bash problem command not found everytime i open terminal