Say I have a Debian machine where I would like to free up space on '/' by removing useless packages. To find good candidates of packages to review, I would like to focus my attention on the largest ones first.

It seems that the standard solution to do this is to list all installed packages by their installed size. However, this solution has a lot of drawbacks, because it ignores dependencies and ignores whether a package was automatically or manually installed:

Of course you could simulate this by a variant of this solution, but it is both slow and ugly. Hence my question: is there a standard tool that looks at the dependency graph of packages and computes this information? (I am considering to write a script for this, but I'd like to make sure it doesn't exist yet.)

I don't know of a one-stop command line solution, although all the tools exist (apt-cache depends --installed, apt-cache rdepends --installed --recurse, apt-mark showmanual, dpigs, etc.). It would be possible to hack together a command line script that could attempt to find large packages with few manually installed reverse dependencies. Here's the proof of concept I used as a starting point:

On the other hand, if you want to do complex analysis of the graph in multiple directions (e.g., what set of manually installed packages has the largest on-disk overlapping set of recursive dependencies), it can quickly get out of hand. At that point, you'll probably need to look at something more customizable (awk or python?).

Full Disclosure: I have contributed to the project below. If that kind of thing matters to you, please take it into account. If I were aware of a similar project that were already in the Debian repositories, I would probably post that instead.

While I prefer to do everything from the command line, you might find pacgraph (also on github) a useful alternative. It was originally written by Kyle Keen for Arch Linux, but it's now compatible with deb- and rpm- based systems as well. I used to have some sample output from an Ubuntu system, but I can't find it, so here's an example from his web site: 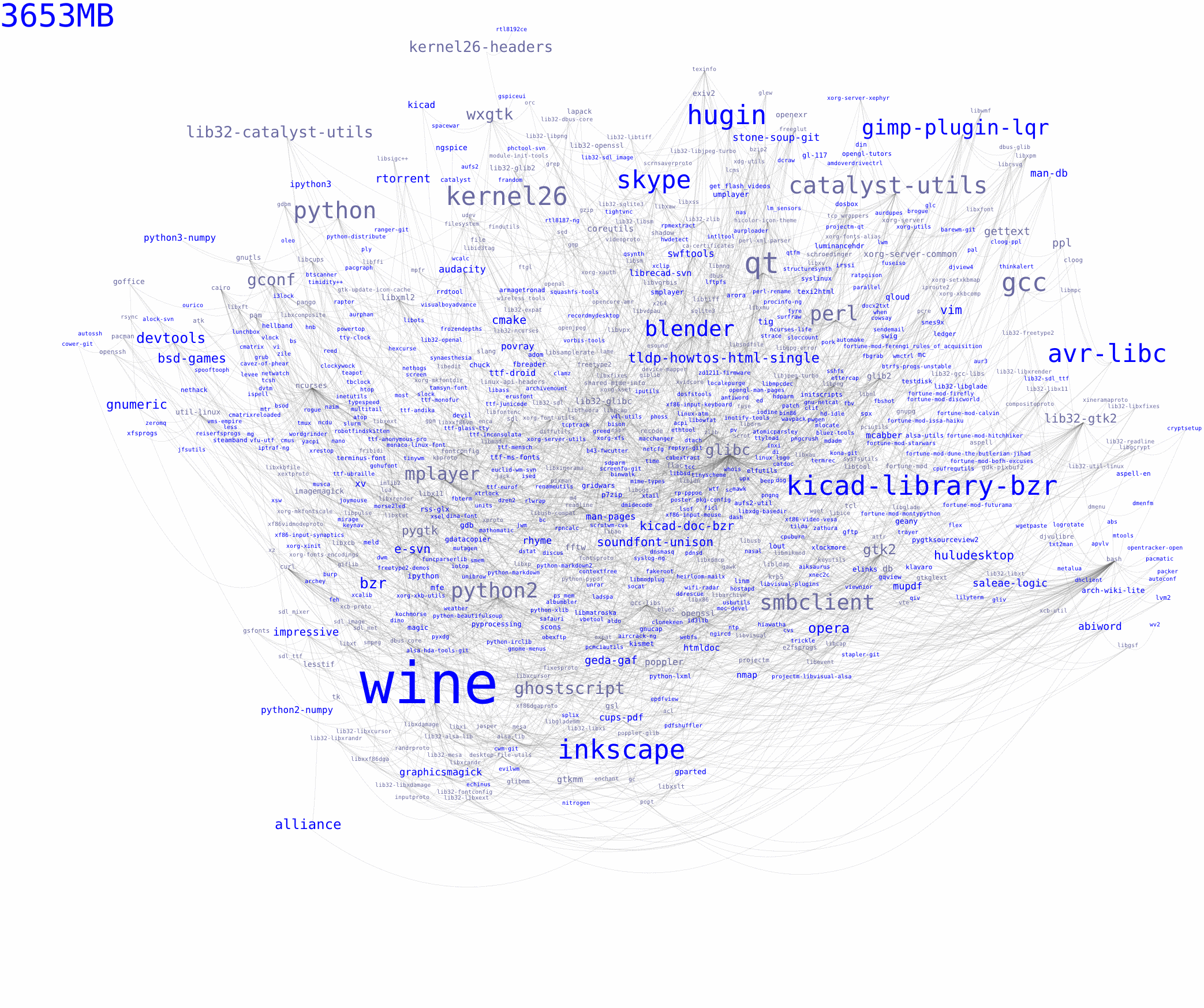 It's been a while since I've used it, but I believe there are also flags to highlight a particular package, with different colors for its recursive dependencies and reverse dependencies.

Why not just run "apt autoremove" or follow the steps under https://wiki.debian.org/ReduceDebian (points to a step by step method of reducing the debian footprint) to automatically remove stuff.

Apt autoremove will find unnessesary packages which can be removed, feeling up disk space.

Not the answer you're looking for? Browse other questions tagged debian apt package-management disk-usage or ask your own question.

23
What packages are installed by default in Debian? Is there a term for that set? Why some of those packages are `automatically installed` and some not?
1
Aptitude - uninstalling autoinstalled packages that are recommended by other packages
6
How to find installed deb packages needlessly marked as manually installed
9
Debian Jessie is installing too many backports
4
Why did 'apt-get autoremove' not work properly?
3
Find which Debian packages are only installed because they are recommended or suggested
1
Debian: The following packages have been kept back.... odbcinst AND odbcinst1debian2
3
Debian: limit non-free to just a few firmware packages
0
Recovering forgotten removed packages names
0
How to find out which packages that have no install candidate can be removed? (How to properly clean out such packages?)