How did `git pull` eat my homework?

I feel like a kid in the principal's office explaining that the dog ate my homework the night before it was due, but I'm staring some crazy data loss bug in the face and I can't figure out how it happened. I would like to know how git could eat my repository whole! I've put git through the wringer many times and it's never blinked. I've used it to split a 20 Gig Subversion repo into 27 git repos and filter-branched the foo out of them to untangle the mess and it's never lost a byte on me. The reflog is always there to fall back on. This time the carpet is gone!

From my perspective, all I did is run git pull and it nuked my entire local repository. I don't mean it "messed up the checked out version" or "the branch I was on" or anything like that. I mean the entire thing is gone.

Here is a screen-shot of my terminal at the incident: 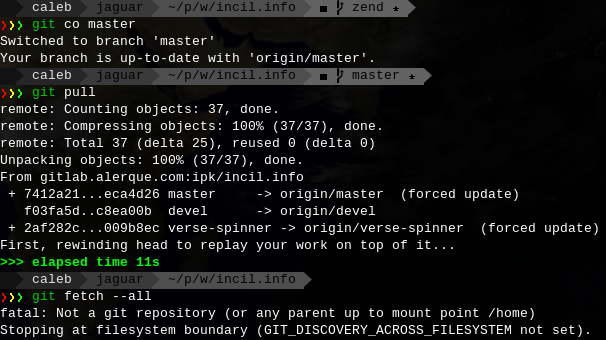 Let me walk you through that. My command prompt includes data about the current git repo (using prezto's vcs_info implementation) so you can see when the git repo disappeared. The first command is normal enough:

There you can see I was on the 'zend' branch, and checked out master. So far so good. You'll see in the prompt before my next command that it successfully switched branches:

And just like that it's gone. The elapsed time marker outputs before the next prompt if more than 10 seconds have elapsed. Git did not give any output beyond the notice that it was rewinding to replay. No indication that it finished.

The next prompt includes no data about what branch we are on or the state of git.

Not noticing it had failed I obliviously tried to run another git command only to be told I wasn't in a git repo. Note the PWD has not changed:

After this a look around showed that I was in a completely empty directory. Nothing. No '.git' directory, nothing. Empty.

My local git is at version 2.0.2. Here are a couple tidbits from my git config that might be relevant to making out what happened:

For example I have git pull set to always do a rebase instead of a merge, so that part of the output above is normal.

I can recover the data. I don't think there were any git objects other than some unimportant stashes that hadn't been pushed to other repos, but I'd like to know what happened.

I have checked for:

What else should I be looking for here?

Yes, git ate my homework. All of it.

I made a dd image of this disk after the incident and messed around with it later. Reconstructing the series of events from system logs, I deduce what happened was something like this:

I don't know exactly what race condition occurred that made this happen, but swapping out binaries in the middle of an operation is certainly not nice nor a testable / repeatable condition. Usually a copy of a running binary is stored in memory, but git is weird and something about the way it re-spawns versions of itself I'm sure led to this mess. Obviously it should have died rather than destroying everything, but that's what happened.

Possibly by failing at defining the file path to be deleted.

Your case reminded me a beautiful day that when my homemade remove(path) method tried to remove the root folder because the given parameter was empty string which the OS corrected (!) as the root folder.

This may be a similar git bug. Such that:

With luck, you can fix this with the following command:

When potential dangerous changes commence, git stashes your current state in ORIG_HEAD. With it you can undo a merge or rebase.

Looks like someone ran git push --force on this repo, and you pulled down those changes. Try cloning the repo fresh, that should get you back into a clean working state again.

Not the answer you're looking for? Browse other questions tagged git data-recovery debugging or ask your own question.

25
Github adding a repository as a fork from an existing clone
10
Does git pull after init remove untracked files?
0
git retains remote information from a deleted repository
3
Git pull error always for a binary file
0
Howto resolve "git merge" issues when attempting to keep PR's in sync with master
0
Yet another `sign_and_send_pubkey: signing failed: agent refused operation`
1
How to allow git pull as a sudo
2
Proper way to checkout home directory .rc files from a git repo?
2
How to backup local git repo the right way in a single file?