What does it mean to be "sh compatible"?

I've seen the phrase "sh compatible" used usually in reference to shells. I'm not sure if it also applies to the programs that might be run from within shells.

What does it mean for a shell or other program to be "sh compatible"? What would it mean to be "sh incompatible"?

Why are there so many "sh compatible" shells?

The Bourne shell was first publicly released in 1979 as part of Unix V7. Since pretty much every Unix and Unix-like system descends from V7 Unix — even if only spiritually — the Bourne shell has been with us "forever."¹

Both the Bourne and Thompson shells were called sh. The shell specified by POSIX is also called sh. So, when someone says sh-compatible, they are handwavingly referring to this series of shells. If they wanted to be specific, they'd say "POSIX shell" or "Bourne shell."³

The POSIX shell is based on the 1988 version of KornShell, which in turn was meant to replace the Bourne shell on AT&T Unix, leapfrogging the BSD C shell in terms of features.⁴ To the extent that ksh is the ancestor of the POSIX shell, most Unix and Unix-like systems include some variant of the Korn shell today. The exceptions are generally tiny embedded systems, which can't afford the space a complete POSIX shell takes.

That said, the Korn shell — as a thing distinct from the POSIX shell — never really became popular outside the commercial Unix world. This is because its rise corresponded with the early years of Unix commercialization, so it got caught up in the Unix wars. BSD Unixes eschewed it in favor of the C shell, and its source code wasn't freely available for use in Linux when it got started.⁵ So, when the early Linux distributors went looking for a command shell to go with their Linux kernel, they usually chose GNU Bash, one of those sh-compatibles you're talking about.⁶

That early association between Linux and Bash pretty much sealed the fate of many other shells, including ksh, csh and tcsh. There are die-hards still using those shells today, but they're very much in the minority.⁷

All this history explains why the creators of relative latecomers like bash, zsh, and yash chose to make them sh-compatible: Bourne/POSIX compatibility is the minimum a shell for Unix-like systems must provide in order to gain widespread adoption.

In many systems, the default interactive command shell and /bin/sh are different things. /bin/sh may be:

I used "shell script" above as a generic term meaning Bourne/POSIX shell scripting. This is due to the ubiquity of Bourne family shells. To talk about scripting on other shells, you need to give a qualifier, like "C shell script." Even on systems where a C family shell is the default interactive shell, it is better to use the Bourne shell for scripting.

This diagram may help: 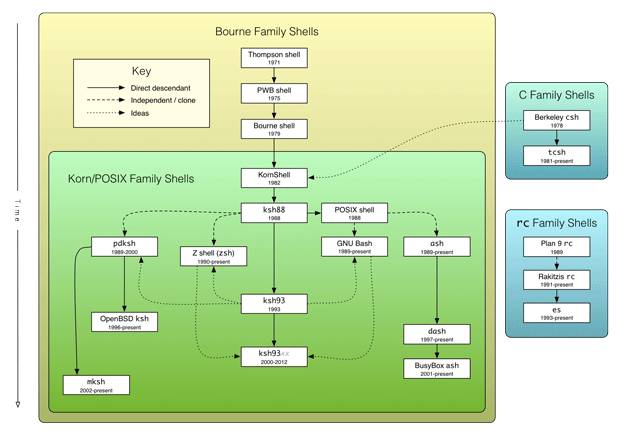 What would it mean to be "sh incompatible"?

Someone talking about an sh-incompatible thing typically means one of three things:

It is a classic error to write a shell script with a #!/bin/sh shebang line at the top but to use Bash or Korn shell extensions within. Since /bin/sh is one of the shells in the Korn/POSIX family diagram above on so many systems these days, such scripts will work on the system they are written on, but then fail on systems where /bin/sh is something from the broader Bourne family of shells. Best practice is to use #!/bin/bash or #!/bin/ksh shebang lines if the script uses such extensions.

There are many ways to check whether a given Bourne family shell script is portable:

Why are they different?

For the same reasons all "New & Improved!" things are different:

"sh compatible" refers to POSIX sh, the basic shell that is required to exist on all compatible systems. A sh-compatible script should work on any POSIX-compatible machine.

The reason it's necessary to say so is that commonly /bin/sh is a symlink to /bin/bash, which has let some Bashisms slip into scripts that declare themselves to use sh with #!/bin/sh. These scripts fail to work on systems that don't use bash as /bin/sh, including some commercial Unices forever, and Debian and derivatives recently.

In particular there's been a trend to use dash, the Debian Almquish Shell, as the default sh lately, because it's smaller and meant to be faster. That trend has highlighted a lot of those Bashisms that were in supposed sh scripts. Describing something as "sh compatible" indicates that it's explicitly intended to work with these systems by staying entirely within the POSIX-specified language — all shells will implement a superset of that functionality, so it's guaranteed to work everywhere, but their extensions aren't compatible with one another.

Different shells have their own development histories and diverged in different directions over time, as they added functions to help interactive use for their users, or scripting extensions like associative arrays. A "sh-incompatible" script would use some of these non-standard extension features, like Bash's [[ conditionals.

The non-POSIX features in bash and tcsh and zsh and all of the other current shells are useful, and there are plenty of occasions where you might want or need them. They just shouldn't be used in a script that declares itself to work with /bin/sh, because you can't rely on those features being in the base sh implementation on the system you're running on.

A script that does need to use, say, associative arrays, should ensure it's run with bash rather than sh:

That will work anywhere with bash. Scripts that don't need the extended functionality and are meant to be portable should declare that they use sh and stick to the base shell command language.

Not the answer you're looking for? Browse other questions tagged shell compatibility or ask your own question.

1
Shell Script Execution with Bash and without bash on command line
1
history - bash, dash, zsh and .profile
122
What is the difference between ~/.profile and ~/.bash_profile?
48
A layman's explanation for "Everything is a file" — what differs from Windows?
43
Where does Mac OS X come from?
24
How complex can a program be written in pure Bash?
23
What is the fastest way to run a script?
23
Are there still systems around with a /bin/sh binary?
13
How to get the last argument to a /bin/sh function
4
Getting search results for Bourne shell
See more linked questions

7
Object oriented Unix shell with at least LINQ capabilities?
36
what do you mean by interactive shell?
5
A program that runs in a shell (e.g. pine) vs. a shell script
13
What is the data structure of $@ in shell?
1
What is the difference between `ash` and `sh` shell on Linux?