Background: I bought an NVIDIA graphics card and tried to install its driver. Somewhere along the way I messed up and now I'm running my computer on Cinnamon backup mode (I have Ubuntu but I removed Unity and replaced it with Cinnamon). I want to start back from scratch (prior to this, I was using a core i3 and no graphics card).

Problem: When I enter sudo dpkg -l | grep -i nvidia I get a list of results: 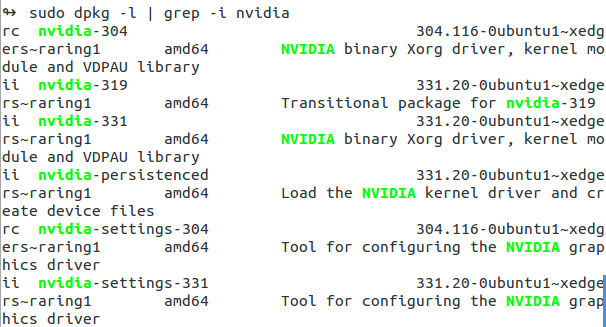 But when I enter sudo apt-get remove --purge nvidia-* it says I have no matches found.

I've tried a couple of other different ways with similar results. Again, I want to start fresh by removing all unnecessary files.

How do I remove all unnecessary nvidia files?

It's not particularly useful here (where you can just fix your escaping as commented) but in the case where you want to search the whole dpkg -l line, you can run it through something like awk and then into apt-get purge with minimal conditioning:

That should prompt you before it does anything but just in case, you could test it with:

That's because what is actually being run is sudo apt-get -s purge nvidia-foo since nvidia-* is expanded to nvidia-foo before being passed to apt-get. This is why you should always quote your globs:

Not the answer you're looking for? Browse other questions tagged ubuntu nvidia cinnamon uninstall or ask your own question.