How can I recreate a VT100 environment and connect an Esprit 250C Terminal? 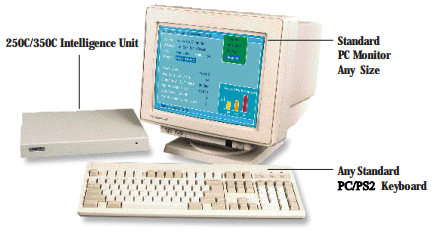 I would like to make it work as a text-based tty terminal, maybe VT100 as it seems to be one of the most common standards.

Here are the connections this device has:

I also have a PC with a 9-pin serial port that I have running Ubuntu 14.04 and access to PCs and Macs.

I have been looking into the utilities like putty, screen, minicom, kermit and so on. I also read up on the LTSP project and watched a few videos on how to create Ubuntu thin clients on YouTube.

I have been reading up on things like the Text Terminal How To which seems to be one of the most complete resources but I still have a few questions.

I'm very comfortable with Linux and understand the basics of how things like named pipes work and, and the history behind why terminals sessions are referenced as /dev/tty1 etc.

I get the impression that I'm doing the opposite of what most people are doing - namely using a terminal emulator program to connect to a remote "server" rather than trying to figure out how to create a "terminal text server" to power an antiquated device.

Nevertheless, I have several questions regarding the "next steps" of my project:

5,6) 9pins is usually enough, the extra pins are secondary data or extra hand shake. The minimum number of pins/wires is 3: ground (gnd), transmit(tx) and receive(rx). It is better to have more handshaking: clear to send and request to send, then a bit better is to add data set ready, data terminal ready. Note the biggest misunderstanding in rs232 is the terms data terminal and data set: a data-terminal is any terminating equipment (computer, terminal, printer, …), a data set is a modem or cross-over cable (null-modem), and nothing else.

1) I think (and I am less sure on this bit), that there is a command line option to the Linux kernel to tell it to use a tty as a login tty (same as the ttys on ctrl-alt-f1 etc). You need to add this option to the config of the boot loader (probably grub). I don't think you need to use minicom etc. see section 15.1 how to set up getty.

Not the answer you're looking for? Browse other questions tagged terminal terminal-emulator or ask your own question.

130
How to connect to a serial port as simple as using SSH?
6
Difference between the terminal file and the terminal screen
8
Raspberry Pi, serial console, minicom, and gnome-terminal
13
A terminal emulator for CygWin?
5
Who does the linewrap and how to deactivate?
2
How do I use a serial terminal with a FreeBSD server?
0
Connecting modern Linux distributions to physical terminals
0
How can I determine when a serial terminal has (dis)connected?