There is a server without any iptables defense: ACCEPT all..

There could be custom applications on this server.

If we should need to harden this server (so deny all, and only let what is needed by the applications) with strict iptables rules, we have to find out by hand that which app uses which dst/src port/protocol and then we have to write the iptables rules for them..

The question: are there any scripts that can help collecting these informations from a running machine? (from the logs?) - And automatically generating the iptables rules?

Like there is the audit2allow on SELinux. Just for iptables!

The machine cannot have any outage!

Ex.: the "MAGIC" script should run a week/month on the machine, collecting informations, then, after a week/month, the script will be able to produce an iptables rule file that we can use.

Many people could get in this situation (how to harden a server regarding iptables). And it would be great if there were a script/solution that can do this :\

Run tcpdump on the machine for a week or so to capture the average traffic. Then you can browse the traffic using wireshark later to see what ports are being used.

You can then map this back using netstat -tuanp to see what PIDs/applications are using what ports.

Theoretically this could be scripted.

You can start with a very basic template like- https://gist.github.com/jirutka/3742890, which only allow ssh and ping, and add any thing else manually.

a quick script hack to generate iptables rules for your application listening on the public interface (0.0.0.0) /tcp

you can also use the iptables -I INPUT <number> to inject the rules in a specific location, which you can list with iptables -nvL --line-numbers INPUT

Unfortunately there is no such script that I've ever seen that can run in a learning mode or passive mode logging all your network usage, taking its results and generating an actual firewall using iptables from its logs.

Your best bet is going to be to start simple and continuously keep adding the various pieces as you begin to fully understand what services your system is providing. You'll need to make use of tools such as netstat to see what ports are in use for the various services you host, as well as what IP addresses are accessing them.

NOTE: In the above you can see what services I have running on a server that are accepting TCP connections, i.e. they're "listening" for connections on various ports.

It's a no-brainier to start with things like SSH (port 22) and HTTP (port 80), if these are typical to your system, so I would do these types of services in mass all at once. For other services such as LDAP or NIS you may want to do these in a more controlled manner, making sure things do not break as you introduce them.

Tools such as FireHOL, Firewall Builder (fwbuilder), and eztables may be helpful as you attack this project, since they provide a nice layer of abstraction from having to build custom iptable rules by hand, which can be tricky.

FireHOL is a language (and a program to run it) which builds secure, stateful firewalls of any complexity from easy to understand, human-readable configurations.

Fwbuilder is a unique graphical firewall tool that allows the user to create objects and then drag and drop those objects into firewalls, to build a powerful security system for a single PC or a network of PCs. Fwbuilder supports a wide range of firewalls (Cisco ASA/PIX, Linux iptables, FreeBSD's ipfilter, OpenBSD's pf, and more), so its rules can be deployed on multiple platforms. Let's take a look at using Fwbuilder on Linux, which might just become a life-long affair with a powerful security system. 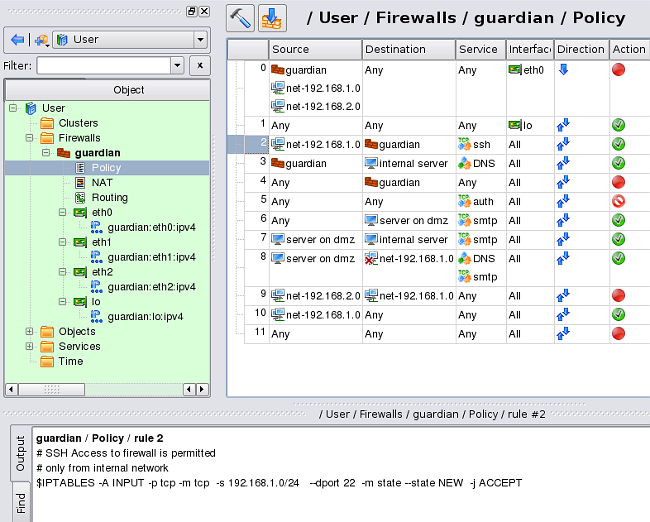 Eztables allows you to quickly configure a firewall without ever touching iptables. The firewall rule syntax is designed to be easy to read and to apply.

This is how you allow the entire internet to access your webserver on TCP-port 80:

Eztables is designed to be simple, yet powerful. It doesn't matter if you want to protect your laptop, are setting up a home router, or building a company firewall.

With a rudimentary iptables firewall in place you'll likely want to compliment it using a tool such as Fail2Ban.

Fail2ban scans log files (e.g. /var/log/apache/error_log) and bans IPs that show the malicious signs -- too many password failures, seeking for exploits, etc. Generally Fail2Ban is then used to update firewall rules to reject the IP addresses for a specified amount of time, although any arbitrary other action (e.g. sending an email) could also be configured. Out of the box Fail2Ban comes with filters for various services (apache, courier, ssh, etc).

Using tools such as this will help limit the exposure that your system will have to endure as you continue to harden it. Even after you're fairly convinced that your system has been hardened, you may still want to continue using Fail2Ban as part of your security measures.

Use iptable rules to log the new connections, that will logs udp too .

You can specify different --log-level to have the logs in another file than /var/log/messages (you will have to configure the syslog daemon).

I think you should read the main application logs as some server have a very periodic activity like noon, end of week, end of month (quarter, year) so you will not miss an important network activity of the server.

As the server is critical, makes the network flow matrix of the server on a nice spreadsheet (ip source,ip dest,protocol,port,application) that will helps you to build the rules.

I know this is not a script and it's not an answer to OP's question but it's an idea of mine that I want to share with OP.

I got all listening ports with:

Maybe this can get you any closer to writing your own script. :)

What the first line does is use netstat to list the listening processes and their ports. It will then generate "iptables" lines to allow for each of those incoming connections. The little sed regex substitution was customized for the netstat output on my server, so it might require some tweaking for you. When it works, you should end up with something looking like:

2) These rules are ambivalent about the source IP. From your original post, it sounds like you want to allow all of your clients to use the server, then, examine the logs to obtain source IP's to go with the destination ports. I don't know of a tool to do that, so this script will only prevent people from making new services on your server which listen on other ports... which is something.

Not the answer you're looking for? Browse other questions tagged linux iptables firewall or ask your own question.