How are "xterm" and "screen" related?

I am not quite sure if there is any subtle or wide differences between screen and xterm. I have used screen before and had it being described as kind of like a multiplexer and have tried xterm a few times. Can anyone explain the differences between the two as well as the pros and cons to them both?

you don't see actual terminals all that often anymore, but for instance the Linux text consoles on (CTRL +) ALT + F1 through F6 are considered terminals.

xterm is a terminal emulator for systems running the x-window system and a graphical user interface. It provides only a single terminal, typically running a single process (an interactive shell by default). Konsole and similarly Gnome Terminal are slightly more advanced terminal emulators for the GUI.

You run screen from within a terminal or a terminal emulator like xterm or PuTTY. In that single terminal window screen functions like a window manager to run multiple virtual terminals.

From the perspective of what's similar between xterm and screen:

Both are emulations of the real hardware device "terminal", like this VT100: 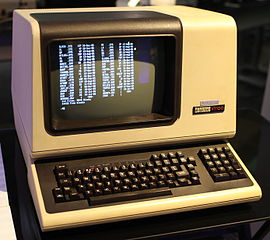 They solve different, but related problems - and can be combined to solve more complex use cases:

Note that there are some terminal emulators like terminator, that implement the features of xterm and screen at the same time - which would of course be totally confusing when used as base to answer this question. Many more terminal emulators support multiple terrminals as tabs in one window, including the common gnome-terminal and konsole

They are fundamentally different. I think the main difference is: Screen allows you to detach the session and reattach it later from a different place.

For example you might have some important process running in your xterm but unfortunately your monitor breaks and you can no longer use your computer.

If the process runs in screen you could now 'ssh` into your machine, detach the "screen" from the unusable xterm and reatach it to your ssh connection.

Another scenario is a process running on a remote machine. Without screen it is difficult to resume the process if you need to disconnect your ssh connection, with screen it is easy.

1
incorrect/overwritten margins when using vim in GNU screen
1
screen & xterm: how to get window split vertically in custom ratio
4
stty settings are pathologically altered
3
vi refresh issues inside screen
1
How to detach and not terminate a GNU Screen session inside xterm when pressing ctrl-c?
3
Kill the child process in a child xterm but not xterm
0
Display full command on GNU screen with bash in title, and interact properly with Vim buffers