How to transform a text file into a picture

If I have a plain text file, how can I convert it to an image file through the command line? (and preserve the layout of the ASCII art in it)

imagemagick is your friend here. Something similar to the following may help you:-

where ascii.txt is your ascii-art file:-

with text 15,15 added as the first line of text (the 15,15 is a positional offset). Also, make sure that the actual text to be converted is enclosed in quotes. Single or double quotes will do, but make sure they're not used as part of your ascii-art as it will confuse matters.

The font you choose should be a monospaced font, otherwise the text won't align. 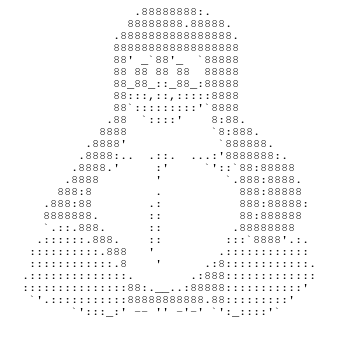 I find ImageMagick's -annotate operator to be a bit more convenient than the -draw method garethTheRed suggested, for the simple reason that it doesn't require modification of the input file. It's not as powerful as -draw, but for wholesale dumping of a text file's contents into an image it serves just fine.

will output a rendered version of the given file contents, but without having to modify your "ascii.txt" file to contain the text 15x15 part of the -draw primitive.

The argument to -font can be any supported font name, if FreeMono isn't available (or simply isn't desired). A list of the fonts available to any ImageMagick command can be obtained using the -list operator, so convert -list font will display all of the possible arguments to -font.

The arguments to -annotate (how far to shift the rendered text from the edge of the canvas) consist of horizontal and vertical pixel offsets (respectively). The first offset (horizontal x-shift) can be any positive integer, but needn't be greater than a few pixels. The second offset (vertical y-shift) must be at least equal to the point size of the font chosen (the argument to -pointsize), because ImageMagick will place the baseline of the font at the given offset. So if you don't shift the font down at least pointsize pixels, the top of the first line will be cut off.

I recommend going over by several pixels at least, so if you're using -pointsize 64 then you should pair that with something like -annotate +15+80. (There's no reason to increase the horizontal offset with larger font sizes, it has no relationship to the text dimensions.)

Needing to guess the necessary dimensions of the output image can also be tedious. I usually just pick excessive values, then take advantage of ImageMagick's -trim and -border to autocrop the result. The following command:

will render into a 1000x2000 box, then trim off the excess white space except for a 10-pixel border all the way around the text. The +repage at the very end prevents the output PNG being created with an image offset, which would otherwise cause GIMP to pop up a dialog on load asking whether it should apply the offset.

(Obviously, 1000x2000 is excessive for small text files, and for longer ones at least the vertical dimension may need to be increased. It's simpler to overestimate, though, as the only cost is convert consuming slightly more CPU and memory while processing.)

If your text file isn't already formatted the way you need in order to render it (say, if it uses very long lines) then you may have to reformat it before handing it to convert. ImageMagick won't wrap the text, so each line of text will extend its full length horizontally. Fortunately, it's possible to run the file through any command-line formatters you'd like, then pipe the processed text into convert instead of reading directly from the file:

That'll render the contents of ascii.txt in 24-point DejaVu Sans Condensed, after it's been processed by the fmt command, which in its default mode of operation will reformat its input by word-wrapping to a width of 75 columns. (Unless there are long continuous strings longer than 75 characters, like URLs, in which case they'll extend over.)

Once fmt has reformatted the text, it'll be passed to convert which will then render the piped fmt output, same as if it was reading the file directly. (Specifying a filename of - is a fairly common UNIX shell shorthand for "read from standard input, instead of any named disk file", and ImageMagick's tools follow that convention.)

You could use openoffice (libreoffice) to do it.

it works with text files too.

A simple solution is to use pango-view provided by Pango, a text rendering library used in GTK you likely already have installed:

You can create SVGs too!

pango-view has many customization and layout option, consult its man page.

Not the answer you're looking for? Browse other questions tagged command-line or ask your own question.

2
Imagemagick 'convert' text to image: ReadTEXTImage: Assertion
1
How to convert output of a terminal app to an image?
-1
/var/log/syslog as background image
1
ImageMagick + ruTorrent-stats (Github repo)

4
Converting text into ASCII/ISO-8859-1
2
Index names of all the files in a plain text file
3
Regarding separate a single file into multiple files according to line separation
2
How do you view a sql.gz file as plain text SQL from the command line?
13
Open a .raw file as text in less
5
How can I convert two-valued text data to binary (bit-representation)
1
How to input text into a new text file using nano from command line?
0
pdftotext command not working with multiple file
2
How to convert text file from lower-case to upper case and save as new file