Can I "drag" a file into a window without a file manager?

(I'm on Arch Linux, using i3 as my wm and xterm as my terminal emulator, though I don't know if any of that is relevant.)

Occasionally, a website asks me to drag a file with my mouse from my desktop into the internet browser's window. Almost always, there is an alternative, but recently I found something I want to do that requires the drag and drop. Unfortunately, I don't have a file manager. I navigate my computer's file system solely through bash.

Is there a way I can fake the drag and drop action? Can I tell my browser "I just dropped this file onto you" without actually doing it?

Worst case scenario, I can download a graphical file manager exclusively to drop files into my web browser, but I'd like to avoid that solution.

Thanks to @derobert for recommending the Dragbox application to me.

Dragbox does exactly what I need. For example, I have a folder with a number of .png files that I would like to be able to drag into Chromium. Inside that folder, executing dragbox *.png creates this window: 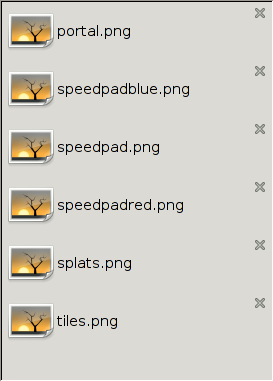 I can use my mouse to drag files from there into Chromium, and it works flawlessly. However, getting to this point was a pain. As far as I am aware, Dragbox only officially supports Debian systems. I couldn't find it anywhere that natively worked for Arch. So, I've written a step-by-step guide to getting Dragbox working in Arch Linux. This is almost exactly what I did on my machine, with a couple modifications to follow better practices. If there's an error somewhere, you can look in this answer's edit history to see exactly what I did on my machine.

If you've followed these steps, Dragbox should be working! You can now execute man dragbox to learn more about how to use it, and launch it by simply typing dragbox.

I had exactly the same problem a few months back and ultimately just wrote a tool to do it for me. When I saw this and found someone else had the same itch I cleaned it up so that someone other than me could actually get it running, and finished off my to-do list. The code is up now: https://github.com/mwh/dragon

To get it, run

That will give you a standalone dragon executable - you can move it wherever you want. make install will put it in $HOME/.local/bin.

Either way, you can then:

to get a simple window with draggable buttons for each of those files: 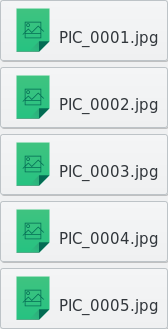 You can drag any of those into a browser, a file manager, an editor, or anywhere else that speaks the standard drag-and-drop protocol.

If you want to go the other way, and drag things in to it, use --target — they'll be printed to standard output, or available to drag out again with if you use --keep as well.

To build you'll need a C compiler and the GTK+ 3 development headers - if you're on Arch you'll get those just by installing GTK+, but on other distributions you may have to apt-get install build-essentials libgtk3-dev or yum install gtk3-devel or similar first. Other than that it's entirely self-contained, with no constituent libraries or anything, and you can just put the executable where you want.

My use case is mostly one-off drags of only a few files (usually just one), without particularly caring how they show up, so if that doesn't line up with what you want then Dragbox (which I didn't see until recently) might still be better for you. Just yesterday I added the support for using it as a drag target as well, so that part hasn't had much use on my end. Other than that, though, I've been using this successfully for a while now. There are other modes and options described in the readme file.

You can easily navigate the filesystem within your browser, using the syntax:

Open the path in an empty tab and from there you can drag and drop your file. At least with chrome/chromium, don't have other browsers here to try.

Just solved the issue myself.

Quite possibly the easiest way is to use the "Open file..." dialog. You can simply drag and drop from the gtk file dialog, just like a file manager.

You may need to open a separate window to make sure the dialog doesn't steal the screen.

That's it. That easy.

You can start the GTK file dialog using a command line tool like zenity and drag'n'drop from there.

Not the answer you're looking for? Browse other questions tagged x11 file-manager drag-and-drop or ask your own question.

13
Drag-and-drop without the drag
7
How do I install userscripts in Chrome on Linux?
1
Does an app with the functionality of Dropzone 3 exist in Linux?

1
File manager with spring-loaded folders?
4
Which configuration option controls whether Nautilus "copies" or "moves" a file/folder on drag and drop for a remote target directory?
0
Alias for File Manager
13
Drag-and-drop without the drag
1
File manager that bookmarks files
0
Having scripts automatically cd into file manager directory
0
Starting ffplay X-window without a window manager