I am using my school's computers and would like to use zsh instead of bash. I'd like to make it the default shell, but I cannot run a command such as $ chsh -s $(which zsh) because I don't have admin privileges.

Is there a way I can put something in my .bashrc or something that automatically calls zsh when it opens as a workaround?

To clarify, zsh is already installed.

Create .bash_profile in your home directory and add these lines:

Update: .profile may work as a general solution when default shell is not bash. I'm not sure if .profile may be called by Zsh as well that it could go redundant but we can do it safely with a simple check:

We can also use which to get the dynamic path of zsh which relies on the value of $PATH:

Normally you can use chsh as a non-root user. But it's occasionally disabled, usually in sites that use some form of networked user database like NIS and LDAP. There might be a ypchsh (NIS) or chsh.ldap (LDAP) instead.

chsh will also usually allow only some approved shells, typically the ones listed in /etc/shells.

If you can't use chsh or its variants at your site, then arrange for your login shell to exec your favorite shell, and set the SHELL variable to point to your favourite shell.

If you can't run chsh because you don't have admin privileges, talk to someone who does.

Most likely you can't use chsh as non-root because the system you're using is configured so that chsh wouldn't work, for example because the system uses NIS or LDAP rather than just the /etc/passwd file. Or perhaps your system's administrator just wants to maintain some control.

The procedure for changing your shell depends on your organization's policies. There may be a local command that does what chsh normally does. Or you may need to submit a support ticket requesting a shell change.

Most of the other answers are good, but if your administrators are reasonably responsive you might not want to bother hacking your startup scripts. I'd probably just invoke zsh -l manually after logging in until the administrator gets around to updating my account.

Another thing to keep in mind: Sometimes different shells can use the same startup files. For example, sh and bash can both execute $HOME/.profile, and csh and tcsh can both execute $HOME/.login and $HOME/.cshrc (though shell-specific startup files like .bashrc, .bash_profile, and .tcshrc can override those). If your default shell is /bin/csh and you want to use /bin/tcsh, updating your .login to invoke /bin/tcsh -l could create an infinite loop. zsh doesn't happen to execute bash-specific startup files, so that's not an issue for you.

Most shells set variables that identify which shell you're running ($BASH_VERSION, $tcsh, $ZSH_VERSION). If you're going to write startup code to invoke your preferred shell, it's not a bad idea to enclose it in an if so it's executed only if you're not already running that shell. Using the code from konsolebox's answer:

(The added complication of checking "${ZSH_VERSION:-unset}" rather than just "$ZSH_VERSION" allows for the possibility that you've done set -o unset, an option that causes a reference to an undefined variable to be an error.)

I believe that the command, chsh is for this very purpose. Although, I'm not sure that every Linux/Unix distro support that. Check the man page of chsh.

I can think of a few scenarios.

Scenario 2 is the only reason to actually change the default shell (it's too restrictive). 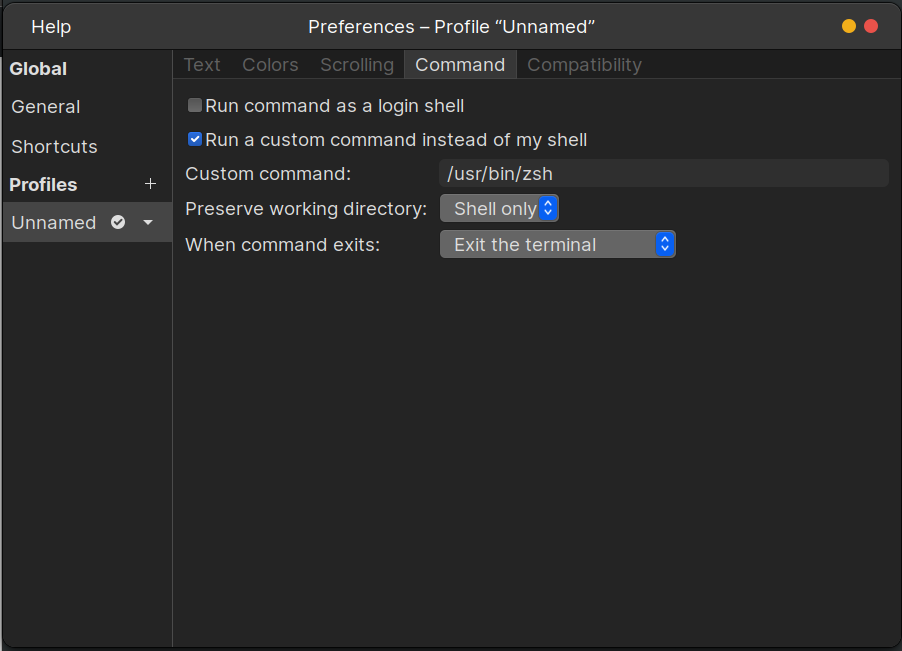 I do not think the provided answer actually makes zsh the default shell. It simple changes the shell to zsh as soon as user logs in to his/her default shell. User will still login to its DEFAULT SHELL but with this, shell will change to zsh

To change the default shell use:

You should be root to do that.

Otherwise the above workaround will come handy.

and it can be invoked by user for him/herself.

Not the answer you're looking for? Browse other questions tagged bash zsh login profile or ask your own question.

2
Changing Shell to /bin/bash without root access via file
1
How do I switch from bash to zsh?
0
at login on RHEL switch shell to bash
483
Difference between Login Shell and Non-Login Shell?
9
Use a shell not installed on remote machine
9
Changing the default shell without chsh or administrator privileges
2
How to use chsh with ldap authentication

2
How to cd into the named directory if command not found?
9
Changing the default shell without chsh or administrator privileges
1
Making multiple calls to a program via a bash shell script
4
Set login shell if /etc/shells is missing
2
Custom bash 'context' when running from FISH
2
Stuck in a loop at login prompt after changing shell to zsh
2
Shells initialization files
0
Can I remove all non-zsh related shell files on Catalina since bash is being deprecated in favor of zsh?
3
Bash script throws "assignment to invalid subscript range" when running from zsh
1
Access to zsh_history denied after making zsh default shell