What are the minimum root filesystem applications that are required to fully boot linux?

It's a question about user space applications, but hear me out!

Three "applications", so to speak, are required to boot a functional distribution of Linux:

My question is in regard to #3. If someone wanted to build an extremely minimal rootfs (for this question let's say no GUI, shell only), what files/programs are required to boot to a shell?

That entirely depends on what services you want to have on your device.

You can make Linux boot directly into a shell. It isn't very useful in production — who'd just want to have a shell sitting there — but it's useful as an intervention mechanism when you have an interactive bootloader: pass init=/bin/sh to the kernel command line. All Linux systems (and all unix systems) have a Bourne/POSIX-style shell in /bin/sh.

You'll need a set of shell utilities. BusyBox is a very common choice; it contains a shell and common utilities for file and text manipulation (cp, grep, …), networking setup (ping, ifconfig, …), process manipulation (ps, nice, …), and various other system tools (fdisk, mount, syslogd, …). BusyBox is extremely configurable: you can select which tools you want and even individual features at compile time, to get the right size/functionality compromise for your application. Apart from sh, the bare minimum that you can't really do anything without is mount, umount and halt, but it would be atypical to not have also cat, cp, mv, rm, mkdir, rmdir, ps, sync and a few more. BusyBox installs as a single binary called busybox, with a symbolic link for each utility.

The first process on a normal unix system is called init. Its job is to start other services. BusyBox contains an init system. In addition to the init binary (usually located in /sbin), you'll need its configuration files (usually called /etc/inittab — some modern init replacement do away with that file but you won't find them on a small embedded system) that indicate what services to start and when. For BusyBox, /etc/inittab is optional; if it's missing, you get a root shell on the console and the script /etc/init.d/rcS (default location) is executed at boot time.

That's all you need, beyond of course the programs that make your device do something useful. For example, on my home router running an OpenWrt variant, the only programs are BusyBox, nvram (to read and change settings in NVRAM), and networking utilities.

Unless all your executables are statically linked, you will need the dynamic loader (ld.so, which may be called by different names depending on the choice of libc and on the processor architectures) and all the dynamic libraries (/lib/lib*.so, perhaps some of these in /usr/lib) required by these executables.

The Filesystem Hierarchy Standard describes the common directory structure of Linux systems. It is geared towards desktop and server installations: a lot of it can be omitted on an embedded system. Here is a typical minimum.

Here are some typical entries in a minimal /dev:

Beyond that you'll need entries for your hardware (except network interfaces, these don't get entries in /dev): serial ports, storage, etc.

For embedded devices, you would normally create the device entries directly on the root filesystem. High-end systems have a script called MAKEDEV to create /dev entries, but on an embedded system the script is often not bundled into the image. If some hardware can be hotplugged (e.g. if the device has a USB host port), then /dev should be managed by udev (you may still have a minimal set on the root filesystem).

Beyond the root filesystem, you need to mount a few more for normal operation:

You can make an /etc/fstab file and call mount -a, or run mount manually.

Start a syslog daemon (as well as klogd for kernel logs, if the syslogd program doesn't take care of it), if you have any place to write logs to.

After this, the device is ready to start application-specific services.

How to make a root filesystem

This is a long and diverse story, so all I'll do here is give a few pointers.

Many frameworks exist for assembling root images for embedded systems. There are a few pointers in the BusyBox FAQ. Buildroot is a popular one, allowing you to build a whole root image with a setup similar to the Linux kernel and BusyBox. OpenEmbedded is another such framework.

Wikipedia has an (incomplete) list of popular embedded Linux distributions. An example of embedded Linux you may have near you is the OpenWrt family of operating systems for network appliances (popular on tinkerers' home routers). If you want to learn by experience, you can try Linux from Scratch, but it's geared towards desktop systems for hobbyists rather than towards embedded devices.

A note on Linux vs Linux kernel

All you need is one statically linked executable, placed on the filesystem, in isolation. You do not need any other files. That executable is the init process. It can be busybox. That gives you a shell and a host of other utilities, all in itself. You can go to a fully functioning system just by executing commands manually in busybox to mount the root filesystem read-write, create /dev nodes, exec real init, etc.

As shown in this answer, all you need is a single statically linked ELF file without even the standard library, therefore a filesystem with a single file. 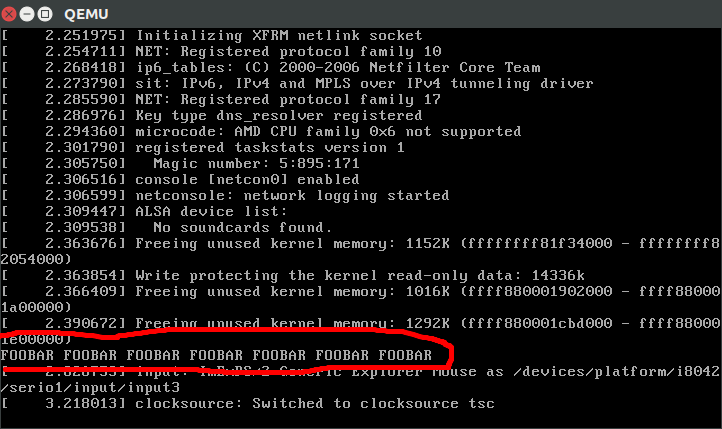 Compile a hello world without any dependencies that ends in an infinite loop. init.S:

We cannot use sys_exit, or else the kernel panics.

This creates a filesystem with our hello world at /init, which is the first userland program that the kernel will run. We could also have added more files to d/ and they would be accessible from the /init program when the kernel runs.

Then cd into the Linux kernel tree, build is as usual, and run it in QEMU:

And you should see a line:

on the emulator screen! Note that it is not the last line, so you have to look a bit further up.

You can also use C programs if you link them statically:

You can run on real hardware with a USB on /dev/sdX and:

Great source on this subject: http://landley.net/writing/rootfs-howto.html It also explains how to use gen_initramfs_list.sh, which is a script from the Linux kernel source tree to help automate the process.

Minimal setup that gives you a shell

Buildroot is my favorite option, see discussion at: What is the smallest possible Linux implementation?

At this point you are basically obliged to deal with the standard library, what insane mind who would code a sh shell without a standard library? So you are better off just using some automation script to set all of that up.

If you do not need any shell utilities, a statically linked mksh binary (e.g. against klibc – 130K on Linux/i386) will do. You need a /linuxrc or /init or /sbin/init script that just calls mksh -l -T!/dev/tty1 in a loop:

The -T!$tty option is a recent addition to mksh that tells it to spawn a new shell on the given terminal and wait for it. (Before that, there was only -T- to dæmonise a programm and -T$tty to spawn on a terminal but not wait for it. This was not so nice.) The -l option simply tells it to run a login shell (which reads /etc/profile, ~/.profile and ~/.mkshrc).

This assumes your terminal is /dev/tty1, substitute. (With more magic, the terminal can automatically be found out. /dev/console will not give you full job control.)

You need a few files in /dev for this to work:

Booting with the kernel option devtmpfs.mount=1 eliminates the need for a filled /dev, just let it be an empty directory (suitable for use as a mountpoint).

You'll normally want to have some utilities (from klibc, busybox, beastiebox, toybox or toolbox), but they are not really needed.

You may want to add a ~/.mkshrc file, which sets up $PS1 and some basic shell aliases and functions.

I once made an 171K compressed (371K uncompressed) initrd for Linux/m68k using mksh (and its sample mkshrc file) and klibc-utils only. (This was before -T! was added to the shell, though, so it spawned the login shell on /dev/tty2 instead and echo'd a message to the console telling the user to switch terminals.) It works fine.

This is a really bare minimum setup. The other answers provide excellent advice towards somewhat more featured systems. This is a real special-case thing.

Not the answer you're looking for? Browse other questions tagged linux embedded startup architecture root-filesystem or ask your own question.

6
How to make a minimal bootable linux (only with terminal) from kernel source code?
97
What is stored in /dev/pts files and can we open them?
60
Is it possible to install the Linux kernel alone?
23
What is the smallest possible Linux implementation?
-4
What are the GNU programs that I need with Linux if I only edit files?

6
Trouble getting busybox switch_root to work
6
Does the kernel delete entries in /dev on an initramfs?
6
Why is GRUB 2 booting so slowly?
1
WARNING: at kernel/irq/handle.c - after changing rootfs, but why?
1
How to populate a root filesystem from scratch?
4
How does linux know where the rootfs is?
0
ps axf shows "/sbin/init splash" for PID1