Run a GUI program at startup

I am using Ubuntu 14.04. I wrote a small script named trial. The contents of the script are as follows:

I copied the script to /etc/init.d, modified permission using chmod +x trial and used update-rc.d trial defaults. The file made link but when I rebooted the machine. It did not run firefox. I tried cron @reboot but with no success. I tried rc.local too again failure.

The directory, /etc/init.d/ contains system scripts that essentially start, stop, restart daemons (system services). It's the "System V Initialization" method (SysVinit), containing the init program (the first process that is run when the kernel has finished loading). (EDIT 2 July 2015: Many Linux systems have recently switched to the systemd init system.)

Find the name of your window manager. Then search for help about automatically starting a program.

I wouldn't expect this to work either. Even though you've wrapped the launching of Firefox in a script it isn't truly a script in the sense that it can be run during startup of the system. For example, in order for Firefox to launch it would need X running and access to open a GUI on a particular session of X.

I would attack the problem in a slightly different way using one of the methods discussed below. In particular I typically use the alternative approach.

Usually you put X related items that you'd like to run in the context of the user (you) in one of 2 files:

Some commands such as xset may not work from within these files. If you'd still like to automate something like this you may be able to add it as a "Startup Application".

Add a startup task to run the shell script. 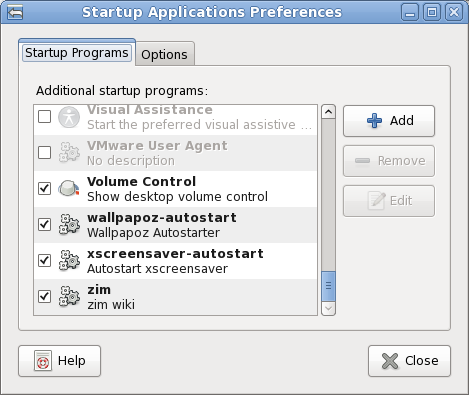 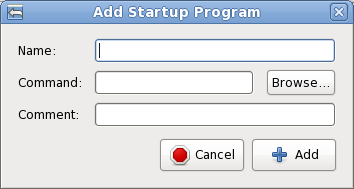 Once you're done OK & Close the dialogs and to test it out logout and log back in.

This answer to Firefox won't open on startup gives a little more information and worked great for me:

Not the answer you're looking for? Browse other questions tagged scripting x11 cron startup sysvinit or ask your own question.

0
Starting Debian mono application (that has a GUI) AFTER boot is done
0
Using rc.local to start server and then launch web-application?
1
Run leafpad with CRON at reboot
3
Crontab suspicious activity
1
Run jar on startup in all *nix based systems