How do I stop a program running at startup in Linux. I want to remove some apps from startup to allow them to be managed by supervisord e.g apache2

Depending on your distro use the chkconfig or update-rc.d tool to enable/disable system services.

On a redhat/suse/mandrake style system:

If you are dealing with a modern Ubuntu system and a few other distros you may have to deal with a combination of traditional init scripts and upstart scripts. Managing init scripts is covered by other answers. The following is one way to stop an upstart service from starting on boot:

The problem with this method is that it does not allow you to start the service using:

An alternative to this is to open the servicename.conf file in your favorite editor and comment out any lines that start with:

That is, change this to

where the "..." is whatever was after "start on" previously. This way, when you want to re-enable it, you don't have to remember what the "start on" parameters were.

Finally, if you have a new version of upstart you can simply add the word "manual" to the end of the configuration file. You can do this directly from the shell:

This will cause upstart to ignore any "start on" phrases earlier in the file.

To stop a service from running on start up

We can enable this again using

Almost every linux distributions use systemd for bootstrapping startup services. So above commands work for most of the distros.

will disable the httpd service

Slackware and Arch linux have similar methods of stopping/starting processes at boot, different than the Ubuntu and Redhat-style examples given above.

For example, Slackware starts the Apache web server with a script /etc/rc.d/rc.httpd, called at the appropriate time during system startup with an argument of "start". Arch linux has differently-named scripts, but the same sort of thing goes on.

To keep some process from starting during system boot, on Slackware, you just make the appropriate script in /etc/rc.d not executable. To keep Apache from starting at the next boot:

To stop an Apache that got started at boot: /etc/rc.d/rc.httpd stop You'll need to be root.

Arch is a bit more complex. The file /etc/rc.conf, a shell script, has an array DAEMONS. To keep Apache from starting at boot, you'd change this line in /etc/rc.conf:

On Ubuntu 10.04 you can control some startup programs from the GUI. 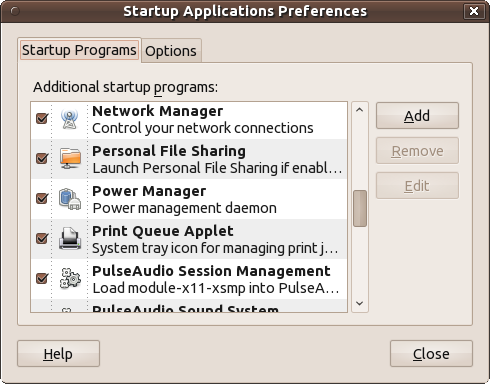 2.In tweaks startup programs you see

1) tap superkey on you keyboard 2) search for 'Startup Applications' 3) choose which program you want to disable 4) hit like to this answer if worx.

Not the answer you're looking for? Browse other questions tagged linux startup shutdown boot or ask your own question.

1
removing startup item from com.apple.launchd
1
Shell script fails to run on startup
1
What priority should I give to a script running on startup?
4
Stop init.d from running, and go to terminal prompt
0
Stop script till I press enter
11
How to manage startup applications in Debian 9?
0
Why is my systemd startup script not running properly? (ubuntu 20.04)