How to forward X over SSH to run graphics applications remotely?

I have a machine running Ubuntu which I SSH to from my Fedora 14 machine. I want to forward X from the Ubuntu machine back to Fedora so I can run graphical programs remotely. Both machines are on a LAN.

I know that the -X option enables X11 forwarding in SSH, but I feel like I am missing some of the steps.

What are the required steps to forward X from a Ubuntu machine to Fedora over SSH?

X11 forwarding needs to be enabled on both the client side and the server side.

On the client side, the -X (capital X) option to ssh enables X11 forwarding, and you can make this the default (for all connections or for a specific conection) with ForwardX11 yes in ~/.ssh/config.

The xauth program must be installed on the server side. If there are any X11 programs there, it's very likely that xauth will be there. In the unlikely case xauth was installed in a nonstandard location, it can be called through ~/.ssh/rc (on the server!).

Note that you do not need to set any environment variables on the server. DISPLAY and XAUTHORITY will automatically be set to their proper values. If you run ssh and DISPLAY is not set, it means ssh is not forwarding the X11 connection.

To confirm that ssh is forwarding X11, check for a line containing Requesting X11 forwarding in the ssh -v -X output. Note that the server won't reply either way, a security precaution of hiding details from potential attackers.

To get X11 forwarding working over ssh, you'll need 3 things in place.

If you have both #1 and #2 in place but are missing #3, then you'll end up with an empty DISPLAY environment variable.

Soup-to-nuts, here's how to get X11 forwarding working.

or you can set this up in your ~/.ssh/config.

I was running into this empty DISPLAY environment variable earlier today when ssh'ing into a new server that I don't administer. Tracking down the missing xauth part was a bit fun. Here's what I did, and what you can do too.

On my local workstation, where I am an administrator, I verified that /etc/ssh/sshd_config was set up to forward X11. When I ssh -X back in to localhost, I do get my DISPLAY set correctly.

Forcing DISPLAY to get unset wasn't too hard. I just needed to watch what sshd and ssh were doing to get it set correctly. Here's the full output of everything I did along the way.

Instead of using sudo to force copying my ssh_host_{dsa,rsa}_key files into place, I used ssh-keygen to create dummy ones for myself.

Fire up sshd on a new port in non-detach mode:

Pop a new terminal and ssh in to localhost on port 50505:

Look at the last three lines there. I fortuitously had DISPLAY set, and had those two nice-looking lines from /usr/bin/xauth.

From there it was child's play to move aside my /usr/bin/xauth to /usr/bin/xauth.old, disconnect from ssh and stop the sshd, then launch sshd and ssh back in to localhost.

When /usr/bin/xauth was gone, I didn't see DISPLAY reflected in my environment.

There's nothing brilliant going on here. Mostly I got lucky in choosing a sane approach to try reproducing this on my local machine.

Then to do X11 forwarding using SSH, you need to add -X to your ssh command, e.g.

then verify that your DISPLAY is not empty by:

If it is, then having verbose parameter for ssh (-v), check for any warnings, e.g.

In case you've got untrusted X11 as shown above, then try -Y flag instead (if you trust the host):

In case you've warning: No xauth data, you may try to generate a new .Xauthority file, e.g.

If you've got a different warnings than above, follow the further clues.

The fix is to add this line to your /etc/ssh/sshd_config:

Install all the following. On Window, install Xming. On Ubuntu in the terminal, use sudo apt install to install ssh xauth xorg.

Go to the folder contains ssh_config file, mine is /etc/ssh.

Edit ssh_config as administrator(USE sudo). Inside ssh_config, remove the hash # in the lines ForwardAgent, ForwardX11, ForwardX11Trusted, and set the corresponding arguments to yes.

In ssh_config file, remove the front hash # before Port 22 and Protocol 2, and also append a new line at the end of the file to state the xauth file location, XauthLocation /usr/bin/xauth, remember write your own path of xauth file.

Now since we are done editing ssh_config file, save it when we leave the editor. Now go to folder ~ or $HOME, append export DISPLAY=localhost:0 to your .bashrc file and save it.

We are almost done. Restart your bash shell, open your Xming program and use ssh -X yourusername@yourhost. Then enjoy the GUI environment.

The problem is also in Ubuntu subsystem on Windows, and the link is at

Add X11UseLocalhost no to /etc/ssh/sshd_config and restart the SSH server.

If you get no DISPLAY, check if xauth is installed correctly and then try it again.

RHE/CEntos doesn't have this issue, this is a Ubuntu thing!

If you are doing ssh from Windows (10) to a Linux system - do yourself a favour and use a SSH client like Putty ( regular ssh -X etc does not work).

Make sure all conditions here are met in Linux server - that is X11Forwarding is yes and xauth is present as explained in the answer https://unix.stackexchange.com/a/12772/121634

Note - If from this Linux server you are connecting to another server and want to forward X11 back to your Windows, you just need to connect to the next in chain with ssh -X. 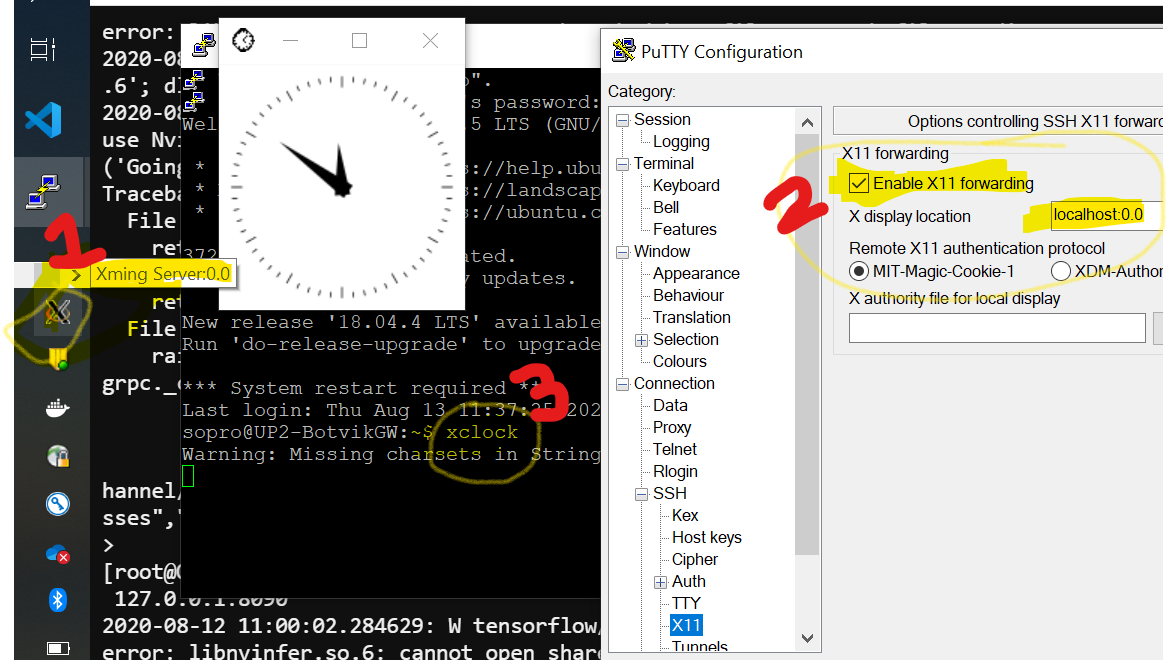 For me the problem was in nodev mount option for /tmp filesystem. X11 needs a special file to be created in there.

So check what are the mount options for /tmp filesystem if you use a separate partition or disk for that.

X11Forwarding must be set on the SSH server (in your case the Ubuntu box) in its sshd_config, and you must allow X11 to be forwarded for the SSH client (your Fedora box) by passing the -X option or editing the ssh_config file to add the ForwardX11 default.

xauth can get locked.

On the machine that I was trying to ssh into broke the lock on xauth. Logging out of the ssh session after issuing xauth -b then logging back in finally allowed me to successfully echo $DISPLAY. Definitely try this before re-creating .Xauthority

To add to the previous excellent answers (setting up ~/.ssh/config and checking to see if the DISPLAY environment variable is set on the client, setting up /etc/ssh/sshd_config and installing xauth on the server), also make sure xterm is installed on the client, e.g.

Not the answer you're looking for? Browse other questions tagged ssh xorg xforwarding or ask your own question.

13
How to run Google Chrome or Chromium on a remote ssh session?
1
How to view Graphical view of Application using ssh
1
Can I use “gedit” through “ssh”?
1
Fordward xclock graphical interface
555
Why am I still getting a password prompt with ssh with public key authentication?
26
With SSH X11 forwarding (`ssh -X`), get `Can't open display` trying to run X applications
12
X11 Not Forwarding over SSH ($DISPLAY not getting set)
10
Forwarding X11 over SSH if the server configuration doesn't allow it
4
How to Run a GUI Application on Remote Server's X11 Display via SSH
1
X: user not authorized to run the X server, aborting
See more linked questions

10
Forwarding X11 over SSH if the server configuration doesn't allow it
29
How do I play an HTTP music stream over SSH?
7
Run X clients over multi-hop ssh tunnel
1
What's a good way to debug issues with X forwarding over ssh where just some applications won't run?
0
How do I run X11 applications over ssh from a Gentoo server that does not have a GUI installed (with minimal added software)?
3
Forward X11 through two SSH tunnels
3
How can I launch gnome-terminal remotely on my headless server? (fails to launch over X11 forwarding)
0
Can't X11 forward through SSH: Unable to open X display