Send text/input to all tabs

I'm using the Gnome terminal and am logged into different servers on each tab. Is there a way to send the same text/command to all the tabs at once?

There's a tool called multixterm. It uses xterm terminals. You can invoke it like so:

And once up you'll be presented with a GUI.

You can then start spinning up xterm windows by clicking the new xterm button. Here for example I've invoked 2. If you then click on the primary window, you can start typing commands in both windows simultaneously: 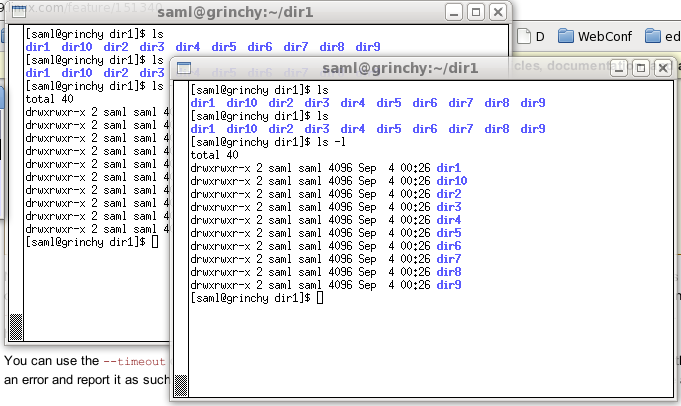 Appears to only be available on Ubuntu, looks similar to multixterm.

The purpose of keyboardcast is to allow you to send keystrokes to multiple X windows at once. This allows you, for example, to control a number of terminals connected to different but similar hosts for purposes of mass- administration.

You can also select non-terminals. If you come up with a reasonable use for this ability I'd be interested in hearing about it.

The program can select windows to send to either by matching their titles (using a substring) or by clicking on them (in a method similar to GIMP's screenshot feature).

The program also features the ability to spawn off multiple instances of gnome-terminal executing a single command on multiple arguments (for example executing 'ssh' on several hosts). The gnome-terminals are invoked with the profile 'keyboardcast' if it exists (so, for example, your font size can be smaller).

If you want to forgo using gnome-terminal there's also Terminator. Specifically this bullet from the feature list:

Here's an example where I'm broadcasting the command ls to 4 different terminator windows.

Not the answer you're looking for? Browse other questions tagged gnome-terminal terminal-multiplexer or ask your own question.