Can I see images and watch movies inside the terminal emulator

is what you want.

For instance - I want to change the background of my terminal?

It emulates a slightly extended vt100 with some extensions and bling thrown in.

You see that above? It does this in the framebuffer.

A number of terminal emulators support Sixel Graphics, from the PySixel github page, the list is:

You can display the images with the afore mentioned PySixel, which seems to be able to do the necessary conversions. Another option is to use tools from netpbm. I had good results using the following to convert and display a JPEG image on mlterm:

XTerm can also display Sixel images, though support is currently limited to 16 colours (and is also buggy). An archive containing sample images can be downloaded here, though the scripts seem to be broken. XTerm doesn't display the exact format output by ppmtosixel (it doesn't support the control sequences used at the start/end). Before finding PySixel, I used the following scrip to hack the ppmtosixel output into something XTerm will display:

The images won't be displayed in the default VT420 mode. Only in VT240, VT241, VT330 or VT340 modes will they be displayed. Also the --enable-sixel-graphics build option is required. I found best results with VT340 (xterm -ti vt340). Here are the results (the first is a very cool tron image from the sample archive): 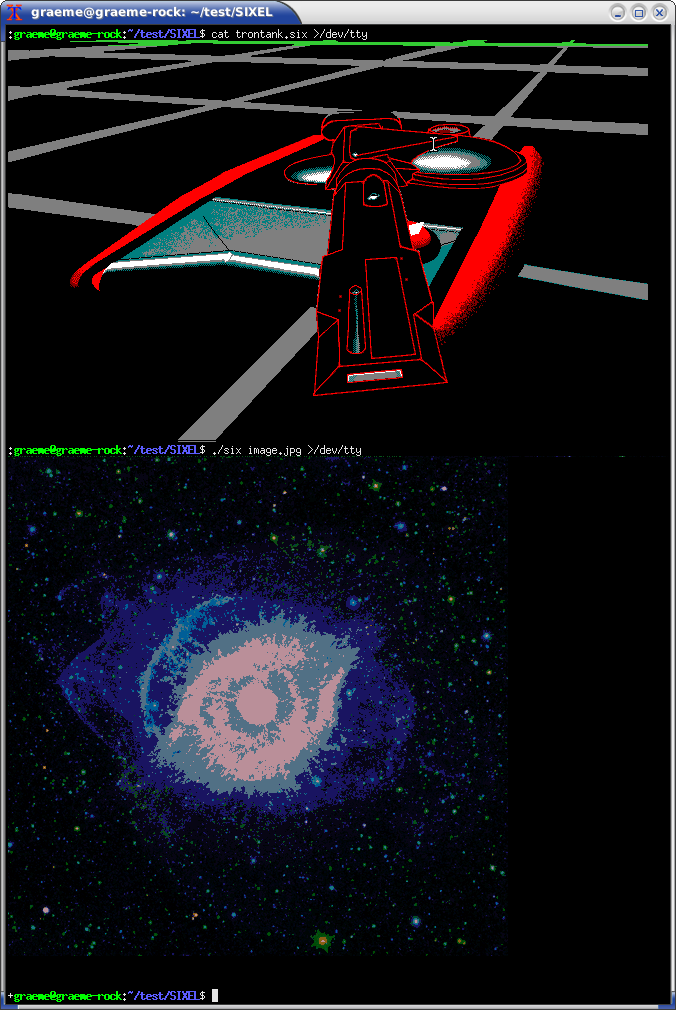 Yes, sort of. Mplayer, for example, supports both aalib (monochrome) and libcaca (color) rendering of video in a text terminal. It's not exactly high-resolution, but with both sub-"pixel" rendering and temporal dithering increasing the effective resolution, you can usually tell what's going on.

In the Unix world terminal emulators emulate serial terminals, where the data stream to be shown to the user is sent one at a time over a serial line.

In the modem time this was typically around 1000-2000 characters a second, but may be much faster today if only emulated hardware is involved. It was then up to the terminal to understand the bytes sent. Usually this was for showing characters, moving the cursor and manipulating the screen display. A few terminals could switch to graphics modes - gnuplot support quite a bit - but the bandwidth is much too small to do anything interesting in terms of video.

Still, for a modern computer with emulated hardware a terminal emulator can do quite a lot. Try searching for images with the search term "ttyquake" to see some of then. I would say though that if you crave HD you will most likely be disappointed.

For image viewing, go for fim

For Video playback option, use mplayer

Rather fim, try picture-tube. Though I have not tested it yet

Not the answer you're looking for? Browse other questions tagged video images terminal-emulator or ask your own question.

111
Watch YouTube videos in terminal
14
Options to show images when on the console
11
How to draw a single pixel in a terminal?
7
Is it possible to view media on the console?
2
Windowing system strictly for code editing?
2
How to display images in OSX terminal