I have a files system that I am trying to put in flash memory mtd3 partition. I first boot using uboot and then do run sdboot to boot using SD card as shown below:

Now I have a running linux system.

So why it shows:

nandwrite: error!: Input file does not fit into device

You can see my environmental variables in first line, I have given sufficient space of 4MB, so why an image of size 3513340 bytes (3.35 MB) won't fit in a device ? And from where this

also it can be seen that:

petalinux running on ARM cortex A9

Partition in Configuration Tool This is the tool for configuration I use prior to building image.ub. See the size of jffs2 which is greater than the actual size of rootfs.jffs2 file. 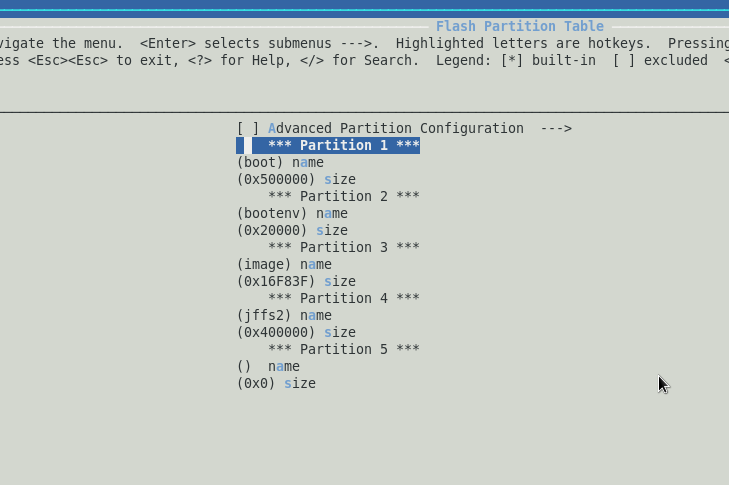 I solved it by using configuration tool , and by making the following selections which were unslected earlier.

First off, I don't think the mtdparts environmental variable conveys any meaningful information as to what the actual partition sizes are. mtdparts is supposed to be a kernel boot parameter, rather than an environmental variable. It may be that PetaLinux is putting these values in the environment during boot. However, even then it appears to be in the wrong format. To see the kernel boot parameters you can do cat /proc/cmdline.

To find out the partition sizes the kernel attempts to create, you can look under /proc/mtd as per your other question. To find out the size of the actual block device created (in bytes), you can do blockdev --getsize64 /dev/mtd3 (needs root privileges). All going well the two should match!

Now, assuming that the partition size is too small, you will want to increase the size of the partition (this is what the other question asks!). Specifying the mtdparts parameter at boot time is the correct way to do this. From drivers/mtd/cmdlinepart.c in the kernel source code (note this offers slightly more information than the almost identical snippet from drivers/mtd/Kconfig that was used previously), this is the correct format specification:

What exactly is meant by standard linux memsize isn't clear. Documentation/kernel-parameters.txt give the following paragraph:

This the the expected use uppercase letters, but whether the lowercase k used in the example specifies the same or different power as K is not mentioned (best to ignore this and use uppercase by the looks of things).

From you question the mtdparts=mtdparts= part seems to be wrong. Normally for an environmental variable the name of the variable isn't part of the value of the variable at all. Also 0 doesn't seem like a valid mtd-id.

Everything else for your given mtdparts seems fine. The size of partition should be carefully chosen to be the same size as erase blocks, but this seems to be the case given the erase block size of 64KiB in /proc/mtd for your other question.

There appears to be no method of determining this on a running system. Atlhough various information about mtd devices can be found under /sys/class/mtd, this information is currently unavailable. The mtdinfo command doesn't seem to do anything other than read and format this information, so that isn't much use either

However, given the driver being used, it should be possible to find this out by looking at the kernel source code. To get this, you can checkout the latest stable source tree with:

Or you may prefer to use the code from your distro for the kernel version used. Note that there likely won't be enough room on the device itself for the ~1.4 GB download. From within the root of the source tree, the following command reveals a good chunk of the places where an mtd->name value is set (note that the code doesn't have to use the name mtd for the structure, but usually will):

In most cases it is either hard coded in the driver or the information is in a .dts file. It also shows that the driver we are looking for is likely to be under drivers/mtd. Digging around further, using commands like this:

shows that the mtd driver is m25p80. This is for various flash devices that communicate via SPI (this explains why looking for PCI related stuff wasn't helpful). Looking at the source file drivers/mtd/devices/m25p80.c, we see mtd->name is set in the following snippet:

Unfortunately there is not a single specific name used by this driver, rather the names are defined elsewhere and depend on the hardware used. Digging further, we see that data is a flash_platform_data structure. Looking for its definition, we get this comment in include/linux/spi/flash.h:

It seems that the mtd-id is specific to the board rather than the flash memory itself. The gives usages of this structure, the -A 2 prints 2 lines after the match and shows most of the names used:

The filenames also reflect the names of the boards, so hopefully yours is there. Quite a lot just use m25p80 as the mtd-id, so this is probably it.

Failing this the other branch of the code snippet traces back to the init_name of the device, although I don't know how to find this (dmesg?).

Assuming m25p80 is the mtd-id, the kernel parameter should be:

All that should remain is to reconfigure U Boot with this added to the bootargs parameter. Reboot and hopefully you should have the partition sizes you need.

Not the answer you're looking for? Browse other questions tagged filesystems u-boot flash-memory or ask your own question.

161
Determine the size of a block device
80
Linux: How to find the device driver used for a device?
3
Is there any substitute for `lspci`?