I need to write a bash script wherein I have to create a file which holds the details of IP Addresses of the hosts and their mapping with corresponding MAC Addresses.

Is there any possible way with which I can find out the MAC address of any (remote) host when IP address of the host is available?

If you just want to find out the MAC address of a given IP address you can use the command arp to look it up, once you've pinged the system 1 time.

Now look up in the ARP table:

If you want to sweep the entire LAN for MAC addresses you can use the command line tool fing to do so. It's typically not installed so you'll have to go download it and install it manually. 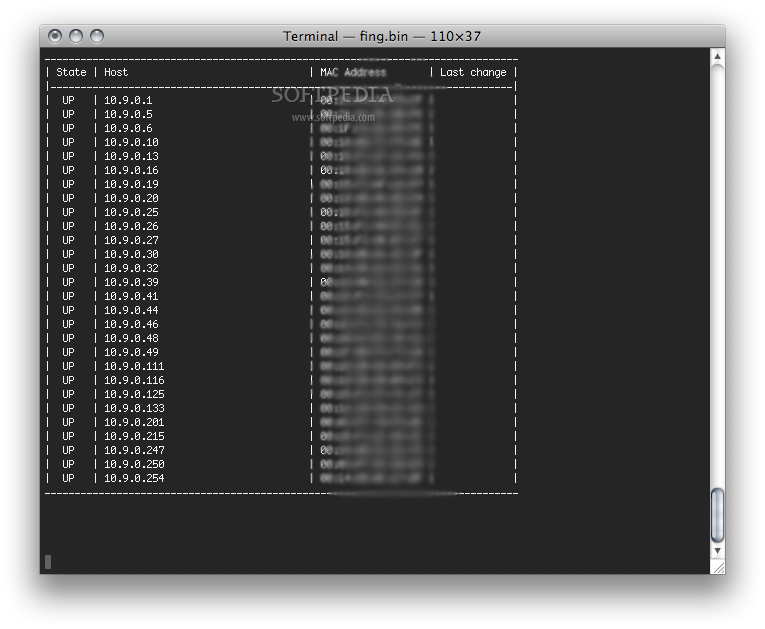 If you find you don't have the arp or fing commands available, you could use iproute2's command ip neigh to see your system's ARP table instead:

You can use arp command:

But you can only use this command in LAN, if you want to find out the MAC address of any remote host, maybe you must use some tool to capture the packet like tcpdump and parsing the result.

The command should return the MAC address in the response. Something like,

arping is provided by package iputils-arping on Debian.

This is from my question and answer in Ask Ubuntu.

You can use the command

-sP (Skip port scan): This option tells Nmap not to do a port scan after host discovery, and only print out the available hosts that responded to the scan. This is often known as a “ping scan”, but you can also request that traceroute and NSE host scripts be run. This is by default one step more intrusive than the list scan, and can often be used for the same purposes. It allows light reconnaissance of a target network without attracting much attention. Knowing how many hosts are up is more valuable to attackers than the list provided by list scan of every single IP and host name.

-PE; -PP; -PM (ICMP Ping Types): In addition to the unusual TCP, UDP and SCTP host discovery types discussed previously, Nmap can send the standard packets sent by the ubiquitous ping program. Nmap sends an ICMP type 8 (echo request) packet to the target IP addresses, expecting a type 0 (echo reply) in return from available hosts.. Unfortunately for network explorers, many hosts and firewalls now block these packets, rather than responding as required by RFC 1122[2]. For this reason, ICMP-only scans are rarely reliable enough against unknown targets over the Internet. But for system administrators monitoring an internal network, they can be a practical and efficient approach. Use the -PE option to enable this echo request behavior.

-PA port list (TCP ACK Ping): The TCP ACK ping is quite similar to the just-discussed SYN ping. The difference, as you could likely guess, is that the TCP ACK flag is set instead of the SYN flag. Such an ACK packet purports to be acknowledging data over an established TCP connection, but no such connection exists. So remote hosts should always respond with a RST packet, disclosing their existence in the process. The -PA option uses the same default port as the SYN probe (80) and can also take a list of destination ports in the same format. If an unprivileged user tries this, the connect workaround discussed previously is used. This workaround is imperfect because connect is actually sending a SYN packet rather than an ACK.

For my computer this command returns: enp6s0

Using this interface name, the mac address of my computer can be obtained using:
cat /sys/class/net/enp6s0/address

Not the answer you're looking for? Browse other questions tagged linux bash mac-address or ask your own question.

19
Equivalent of iwlist to see who is around?
5
How does FING (or any of the IP/MAC Address Mappers) work?

0
search fitting ipv6 address for MAC-Address in neighbours
12
How to use shell to derive an IPv6 address from a MAC address?
4
Create map network_iface_name <--> IPv4 address
0
How to improve performance in generating MAC addresses with od?
3
How to assign multiple different interface names on the same NIC card (hardware MAC address)
2
Hetzner reported not allowed MAC addresses in subnet
0
Changing `iptables` rules by `MAC` address