I'm trying to stream my Gnome Desktop I installed on my OpenVZ VPS Server, and I'm not trying to run this from SSH, but the terminal inside the GNOME desktop,

I know it probably doesn't have a sound card, but it's not like i'm trying to play the sound, I just want to route it to the stream.

Inside my PulseAudio Volume Control

Here is how it looks like when I attempt to stream it. 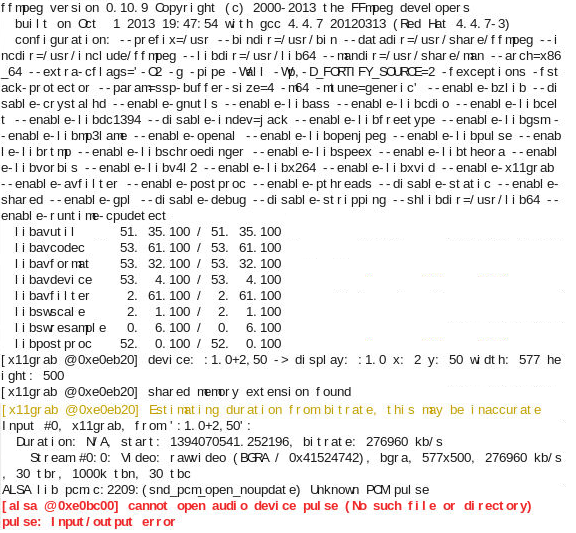 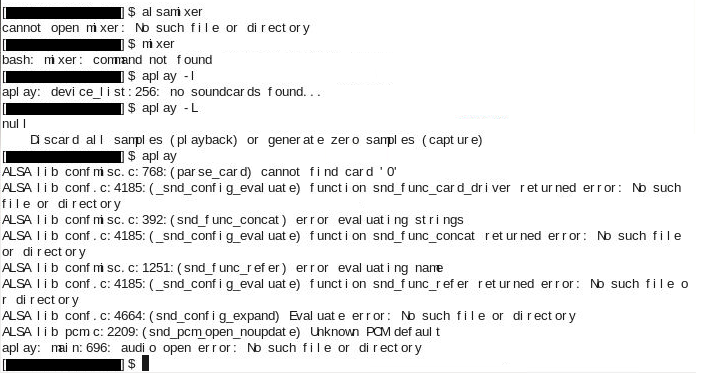 Reading the script provided in your own answer, I've reached the following conclusions about your solution. Please correct me on any/all mistakes I might have made.

You append an xwininfo $GAME_WINDOW-specific dataset to a tmpfile dump after specifying $GAME_WINDOW's geometry via wmctl. Before initiating the dump you effectively truncate your tmpfile to 0-bytes with rm -f which presumably occurs only once per session either because the stream is session-specific or to avoid the tmpfile growing too large, though, again, I'm presuming both. I base the above conclusions on these three lines:

While I'm not intimately familiar with either wmctl or xwininfo I do know that they're common xorg utilities for automating various X window behaviors. I'm assuming you're streaming that dataset just to keep up with any changes as they might occur so ffmpeg can do the right thing with its transcode rather than actually pumping the actual graphic/sound source data through the following two environment variables as I doubt very seriously the latter behavior would work for any more than a few seconds if at all:

The process for $INRES appears much the same, if a little less complex.

Most noteworthy to me is that the entire tmpfile is concatenated at least twice for every invocation, which is not to mention all of the |pipes. Probably there are a lot of ways to do this, but I can't imagine this would be among the better of them.

After this you invoke ffmpeg referencing the two variables above and various other options including other environment variables you've also specified:

What follows involves no tmpfiles, a single |pipe, calls only a single invocation of sed and a single subshell command substitution for parsing your geometry settings, and is contained in a single function. All of the environment variables are defined in here-documents streamed to its stdin and are therefore effectively locally scoped. They are also defined via parameter-substitution and are therefore configurable. For instance to alter the value of $FPS for a single invocation you need only do:

For what it's worth, though, I still think vlc would make a much better option.

So you've definitely got pulseaudio installed, but you are apparently missing the ALSA pulseaudio emulation drivers. Pulseaudio is interfaced by client apps in a lot of different ways, but a common one is for the applications to address ALSA and pulseaudio to intercept. Alsamixer evern works this way on a properly configured system. Here is a very useful page for understanding the way pulseaudio works. In particular, it has this to say on module-alsa-sink:

You should (almost) never have to load this module manually.

To that end, if you've got VLC, or can get it, you might try streaming with it:

should contain an output address something like what I've pasted in below for your dummy source:

Oh, and you might also have some interest in pacat and you've probably already got it. It's the single executable that both parec and paplay link to.

A little more on Pulse/ALSA (though they're documentation is pretty good on this):

Pulseaudio attempts to imitate ALSA for any application that hasn't yet been updated to interface it. Basically the theory goes that if an application isn't equipped to do dbus it with pulse, pulse will middleman ALSA anyway via the module-alsa-sink plugin interface I mentioned before. In fact, the same is true for OSS and Esound and their respective modules if they should be required.

But maybe you're overthinking this - the simplest sound streaming can be accomplished with mkfifo, or even just cat, should you desire. Depending on your bandwidth and latency requirements netcat could be pretty useful here. You could also look in to Sox - it offers an interface similar to pacat.

What is your linux distribution? I understand its in a container, but verifying you've updated all relevant packages is probably called for here, especially if pulse isn't running. Try this:

If it runs, try this for maybe a better hint at what your source might be:

Solved the problem myself, This below works perfect even without a sound card on your VPS, it streams desktop both audio and video.

Not the answer you're looking for? Browse other questions tagged linux centos alsa ffmpeg pulseaudio or ask your own question.