What are the responsibilities of each Pseudo-Terminal (PTY) component (software, master side, slave side)?

I am trying to figure out how a tty works1 (the work-flow and responsibilities of each elements). I have read several interesting articles about it, but there are still some blurry areas.

This is what I understand so far:

Here are my questions:

1. I base my understanding on the TTY demystified by Linus Akesson, and the Linux Kernel by Andries Brouwer posts, as on several other questions on these sites

The master side replaces the line (the pair of TX/RX wires) that goes to the terminal.

The terminal displays the characters that it receives on one of the wires (some of those are control characters and make it do things like move the cursor, change colour...) and sends on another wire the characters corresponding to the keys you type.

Terminal emulators like xterm are not different except that instead of sending and receiving characters on wires, they read and write characters on their file descriptor to the master side. Once they've spawned the slave terminal, and started your shell on that, they no longer touch that. In addition to emulating the pair of wire, xterm can also change some of the line discipline properties via that file descriptor to the master side. For instance, they can update the size attributes so a SIGWINCH be sent to the applications that interact with the slave pty to notify them of a changed size.

Other than that, there is little intelligence in the terminal/terminal emulator.

What you write to a terminal device (like the pty slave) is what you mean to be displayed there, what you read from it is what you have typed there, so it does not make sense for the terminal emulator to read or write to that. They are the ones at the other end.

A lot of the intelligence is in the tty line discipline. The line discipline is a software module (residing in the driver, in the kernel) pushed on top of a serial/pty device that sits between that device and the line/wire (the master side for a pty).

You can see the effect of disabling the tty line discipline by issuing stty raw -echo (note that the bash prompt or other interactive applications like vi set the terminal in the exact mode they need, so you want to use a dumb application like cat to experience with that). Then, everything that is written to the slave terminal device makes it immediately to the master side for xterm to read, and every character written by xterm to the master side is immediately available for reading from the slave device.

The line discipline is where the terminal device internal line editor is implemented. For instance with stty icanon echo (as is the default), when you type a, xterm writes a to the master, then the line discipline echoes it back (makes a a available for reading by xterm for display), but does not make anything available for reading on the slave side. Then if you type backspace, xterm sends a ^? or ^H character, the line discipline (as that ^? or ^H corresponds to the erase line discipline setting) sends back on the master a ^H, space and ^H for xterm to erase the a you've just typed on its screen and still doesn't send anything to the application reading from the slave side, it just updates its internal line editor buffer to remove that a you've typed before.

Then when you press Enter, xterm sends ^M (CR), which the line discipline converts on input to a ^J (LF), and sends what you've entered so far for reading on the slave side (an application reading on /dev/pts/x will receive what you've typed including the LF, but not the a since you've deleted it), while on the master side, it sends a CR and LF to move the cursor to the next line and the start of the screen.

The line discipline is also responsible for sending the SIGINT signal to the foreground process group of the terminal when it receives a ^C character on the master side etc.

Many interactive terminal applications disable most of the features of that line discipline to implement it themselves. But in any case, beware that the terminal (xterm) has little involvement in that (except displaying what it's told to display).

And there can be only one session per process and per terminal device. A session can have a controlling terminal attached to it but does not have to (all sessions start without a terminal until they open one). xterm, in the process that it forks to execute your shell will typically create a new session (and therefore detach from the terminal where you launched xterm from if any), open the new /dev/pts/x it has spawned, by that attaching that terminal device to the new session. It will then execute your shell in that process, so your shell will become the session leader. Your shell or any interactive shell in that session will typically juggle with process groups and tcsetpgrp(), to set the foreground and background jobs for that terminal.

As to what informations are stored by a terminal device with a tty discipline (serial or pty), that's typically what the stty command displays and modifies. All the discipline configuration: terminal screen size, local, input output flags, settings for special characters (like ^C, ^Z...), input and output speed (not relevant for ptys). That corresponds to the tcgetattr()/tcsetattr() functions which on Linux map to the TCGETS/TCSETS ioctls, and TIOCGWINSZ/TIOCSWINSZ for the screen size. You may argue that the current foreground process group is another information stored in the terminal device (tcsetpgrp()/tcgetpgrp(), TIOC{G,S}PGRP ioctls), or the current input or output buffer.

Note that that screen size information stored in the terminal device may not reflect the reality. The terminal emulator will typically set it (via the same ioctl on the master size) when its window is resized, but it can get out of sync if an application calls the ioctl on the slave side or when the resize is not transmitted (in case of an ssh connection which implies another pty spawned by sshd if ssh ignores the SIGWINCH for instance). Some terminals can also be queried their size via escape sequences, so an application can query it that way, and update the line discipline with that information.

For more details, you can have a look at the termios and tty_ioctl man pages on Debian for instance.

To play with other line disciplines:

Edit: Since this answer, I wrote a dedicated article on my blog, for people who would be interested on more details.

After a lot of reading, this is what I understood.

Here is a scheme I made some time ago about how sshd works. It doesn't concern the operation of line discipline and stuff, but it adds a real-life illustration of who interacts with what: 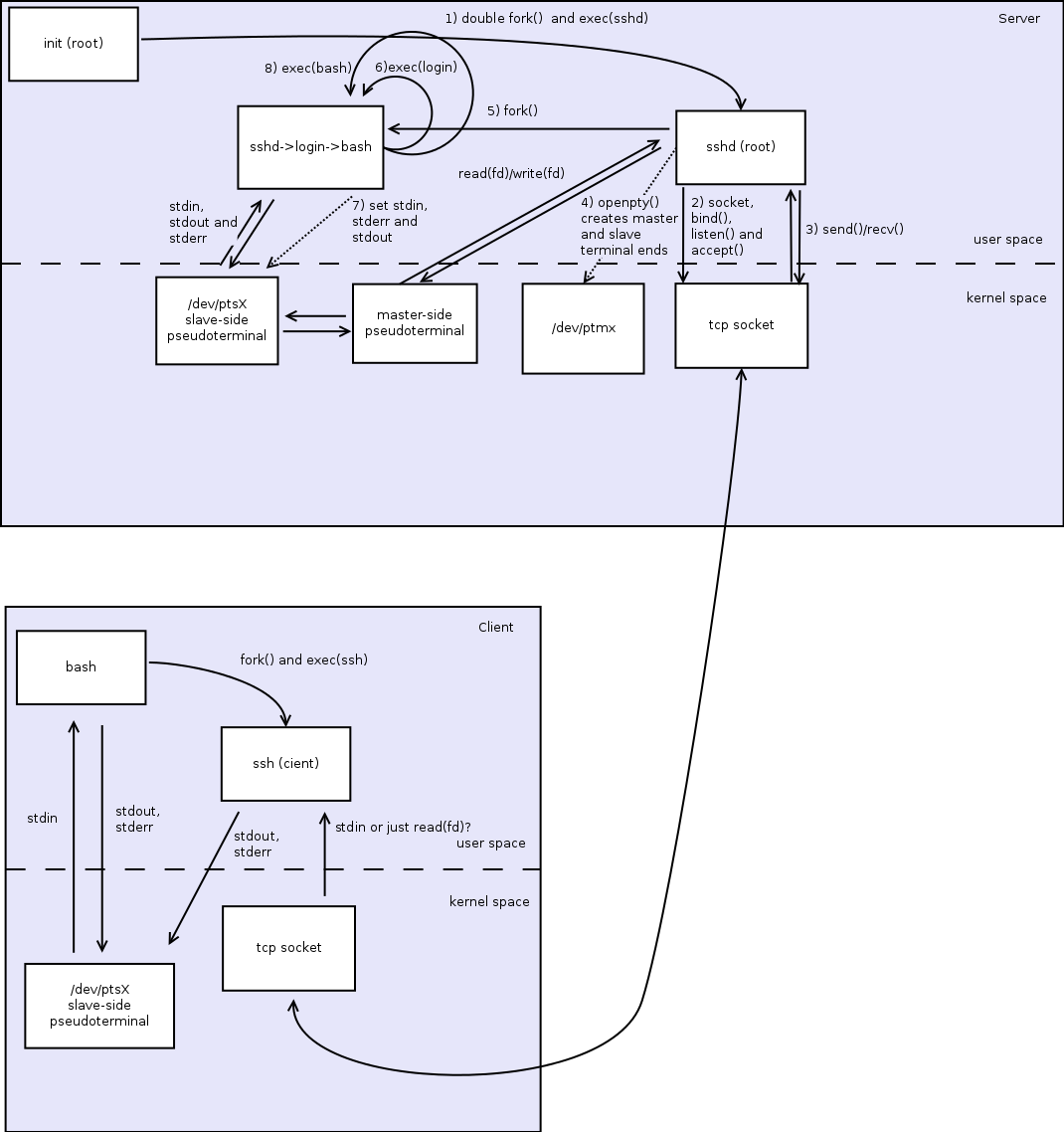 The file /dev/ptmx is a character file with major number 5 and minor number 2, usually of mode 0666 and owner.group of root.root. It is used to create a pseudo-terminal master and slave pair.

When a process opens /dev/ptmx, it gets a file descriptor for a pseudo- terminal master (PTM), and a pseudo-terminal slave (PTS) device is created in the /dev/pts directory. Each file descriptor obtained by opening /dev/ptmx is an independent PTM with its own associated PTS, whose path can be found by passing the descriptor to ptsname(3).

Before opening the pseudo-terminal slave, you must pass the master’s file descriptor to grantpt(3) and unlockpt(3).

Once both the pseudo-terminal master and slave are open, the slave provides processes with an interface that is identical to that of a real terminal.

Pseudo-terminals can also be used to send input to programs that normally refuse to read input from pipes (such as su(8), and passwd(8)).

each X is a session you open it , So slaves need to indexing.

It's real console has been generated by your boot system such as sysV.

About Why slave insted of master: http://commons.wikimedia.org/wiki/File:Termios-script-diagram.png

Not the answer you're looking for? Browse other questions tagged terminal kernel tty terminal-emulator pty or ask your own question.

3
How is sudo interrupted in xterm on Ctrl-C?
0
How does terminal in Linux actually work?
1500
What is the exact difference between a 'terminal', a 'shell', a 'tty' and a 'console'?
115
How do keyboard input and text output work?
100
Why does Ctrl-D (EOF) exit the shell?
41
Does pressing ctrl-c several times make the running program close more quickly?
18
Who decides which application receives the signal from keyboard?
8
What is the TTY major number of your Unix?
5
How does Bash get the output of an executed program?
8
BSD-style pseudoterminals vs. UNIX 98 pseudoterminals
See more linked questions