Copy & paste in a terminal without SHIFT

In all terminal emulators that I know of, Ctrl is used for sending control codes such as Ctrl+C and Ctrl+Z. On most systems this conflicts with common keyboard shortcuts.

Thus on all those systems except OS X, CtrlShift is used for copy-pasting and more, which I find really annoying. If I got a penny for every time I opened the Firefox inspector accidentally, I would be rich.

I tried mimicking Apples behavior of using Cmd for keyboard shortcuts, but this is practically impossible to achieve across the whole desktop.

The other alternative is to use another combination for sending control codes. Is there any terminal emulator that supports this?

I found Sakura allows setting the modifier for key combos, but not for control characters. Another desirable feature is non-messed-up line wrapping, but that is of secondary importance. 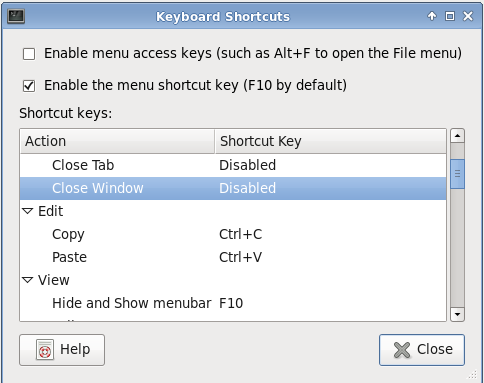 Then you can still press Shift to do whatever that key combination would usually do in a terminal, e.g.

Alternatively, you could get into the habit of using

in all applications, to avoid ever accidentally pressing Ctrl+C in your terminal and having it abort the program instead of copying some text. Those shortcuts date back to the IBM Common User Access standards. Some people might remember them from DOS EDIT.

With the kitty terminal you can set this configuration option (not default, but nice):

You can also select text and paste by clicking with the mouse scroller...

I'm a fan of Parcellite. It can copy content on selection and paste on mouse middle click. It is much faster than using keyboard shortcuts. Give it a try.

Not the answer you're looking for? Browse other questions tagged terminal keyboard-shortcuts terminal-emulator or ask your own question.

1
What does pressing Alt+Shift+3 do in Terminal?
11
Use M-C, M-V, M-A for Copy, Paste, Select All
8
Copy/paste across vim without X
3
Shift + Ctrl + C (terminal copy) doesn't work since I installed Awesome WM
2
copy from file and paste in the terminal without x server
7
How to set ctrl+c to copy, ctrl+v to paste and ctrl+shift+c to kill process in xfce4-terminal?
5
Use shift-Insert to paste in WSL