diff within a line

I have some sql dumps that I am looking at the differences between. diff can obviously show me the difference between two lines, but I'm driving myself nuts trying to find which values in the long list of comma-separated values are actually the ones causing the lines to be different.

What tool can I use to point out the exact character differences between two lines in certain files?

There's wdiff, the word-diff for that.

On desktop, meld can highlight the differences within a line for you.

grep -v if not interested in positions of the diffs.

I've used vimdiff for this.

Here's a screenshot (not mine) showing minor one or two character differences that stands out pretty well. A quick tutorial too.

Here is a "..hair of the dog that bit you" method...
diff got you to this point; use it to take you further...

Here is the output from using the sample line pairs... ☻ indicates a TAB

Here is the script.. You just need to ferret out the line pairs somehow.. (I've used diff only once (twice?) before today, so I don't know its many options, and sorting out the options for this script was enough for me, for one day :) .. I think it must be simple enough, but I'm due for a coffee break ....

wdiff is actually a very old method of comparing files word-by-word. It worked by reformatting files, then using diff to find differences and passing it back again. I myself suggested adding context, so that rather than word-by-word compare, it does it with each word surrounded by other 'context' words. That allows the diff to synchronise itself on common passages in files much better, especially when files are mostly different with only a few blocks of common words. For example when comparing text for for plagiarism, or re-use.

dwdiff was later created from wdiff. But dwdiff uses that text reformatting function to good effect in dwfilter. This is a great development – it means you can reformat one text to match another, and then compare them using any line-by-line graphical diff displayer. For example, using it with "diffuse" graphical diff....

This reformats file1 to the format of file2 and gives that to diffuse for a visual comparison. file2 is unmodified, so you can edit and merge word differences into it directly in diffuse. If you want to edit file1, you can add -r to reverse which file is reformatted. Try it and you will find it is extremely powerful!

My preference for the graphical diff (shown above) is diffuse as it feels far cleaner and more useful. Also it is a standalone python program, which means it is easy to install and distribute to other UNIX systems.

Other graphical diffs seem to have a lot of dependancies, but can also be used (you choice). These include kdiff3 or xxdiff.

Using @Peter.O's solution as a basis I rewrote it to make a number of changes.

The colours are changeable through variables at the top of the script and you can even forego colours entirely by using normal characters to express differences.

The idea is to replace commas (or whichever delimiter you wish to use) with newlines using sed. diff then takes care of the rest.

On the command line, I would make sure I add judicious new-lines before comparing files. You can use sed, awk, perl or anything really to add line breaks in some sort of systematic way - make sure not to add too many though.

But I find the best is to use vim as it highlights word differences. vim is good if there are not too many differences and the differences are simple.

If I'm reading your question correctly, I use diff -y for this kind of thing.

It makes comparing a side by side comparison much simpler to find which lines are throwing the differences.

I had the same problem and solved it with PHP Fine Diff, an online tool that allows you to specify granularity. I know it's not technically a *nix tool, but I didn't really want to download a program just to do a one-time, character level diff.

GNU Emacs has the very good "ediff" mode. I use it and press a or b frequently.

And power users get even more fancy, e.g. : https://emacs.stackexchange.com/questions/16469/how-to-merge-git-conflicts-in-emacs 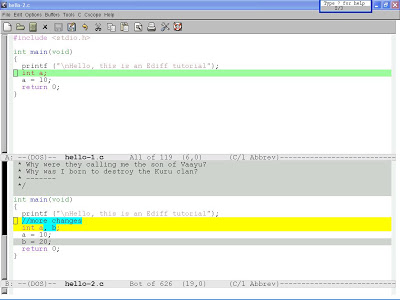 And it has lots of powerful features. Expanded help menu:

I highly recommend committing the capabilities shown in the menu to memory, so you use them when they'd be useful. (Wow, I haven't looked at the menu in so long it has features I forgot it had.)

Emacs is available for every *nix platform. And its as open source as it gets.

I use ediff so often that typing M-x ediff took too long, so I bound it to C-c C-e.

kdiff3 is becoming the standard GUI diff viewer on Linux. It is similar to xxdiff, but I think kdiff3 is better. It does many things well, including your request to show "exact character differences between two lines in certain files".

Not the answer you're looking for? Browse other questions tagged command-line diff or ask your own question.

2
Compare two logs line by line and show differences and if the order of words from a line are not the same
-1
Is there a way to compare two nucleotide sequences in Linux via command line tools such as diff
41
How to color diff output?
9
diff showing only differences inside line

4
How to use diff tool to take a diff between directories with libraries and source?
63
How to diff files ignoring comments (lines starting with #)?
2
A combination of uniq and agrep?
15
Compare two files strictly line-by-line, without insertions or deletions
21
Display only relevant hunks of a diff/patch based on a regexp
0
diff percentage between two strings
5
How shall I understand the unified format of diff output?
9
diff showing only differences inside line