How does Linux deal with a separate /boot partition?

I am interested to learn about how Linux deals with a separate boot partitions. I am not interested in actually doing this, but I would like to know how this works under-the-hood.

Consider a hard drive sda, which has two partitions sda1 and sda2. Let's say that sda2 is the root partition / which contains the Linux OS.

My understanding is that the bootloader GRUB2, is mounted to /boot. When the directory /boot is on a separate partition sda2, however, how is it that this can happen before / is actually mounted?

How does the interaction between the BIOS, the Master boot record and GRUB (or the files /boot) successfully happen in this case? Is it that the data in /boot is not actually mounted to the / filesystem at this early stage?

Note: this question deals with mounting the root partition, but does not discuss a separate boot partition.

Here is the problem in your understanding:

My understanding is that the bootloader GRUB2, is mounted to /boot.

GRUB is not "mounted" on boot. GRUB is installed to /boot, and is loaded from code in the Master Boot Record. Here is a simplified overview of the modern boot process, assuming a GNU/Linux distribution with an MBR/BIOS (not GPT/UEFI):

Notice how the kernel is only loaded at step 7. Because of this, there is no concept of mounting until step 7. This is why /boot has to be mounted again in step 9, even though GRUB has already used it.

It may also be of use to look at the GRUB 2 section of the Wikipedia page on GRUB.

My understanding is that the bootloader GRUB2, is mounted to /boot. When the directory /boot is on separate partition sda2, however, how is it that this can happen before / is actually mounted?

I don't think you're understanding is quite right here. From the GNU GRUB Wikipedia page:

When a computer is turned on, the computer's BIOS finds the configured primary bootable device (usually the computer's hard disk) and loads and executes the initial bootstrap program from the master boot record (MBR). The MBR is the first sector of the hard disk, and has the number 0 (sectors counting starts at 0). For a long time, the size of a sector has been 512 bytes, but since 2009 there are hard disks available with a sector size of 4096 bytes, called Advanced Format disks. As of October 2013, such hard disks are still accessed in 512-byte sectors, by utilizing the 512e emulation.

When power is turned on, the following happens: 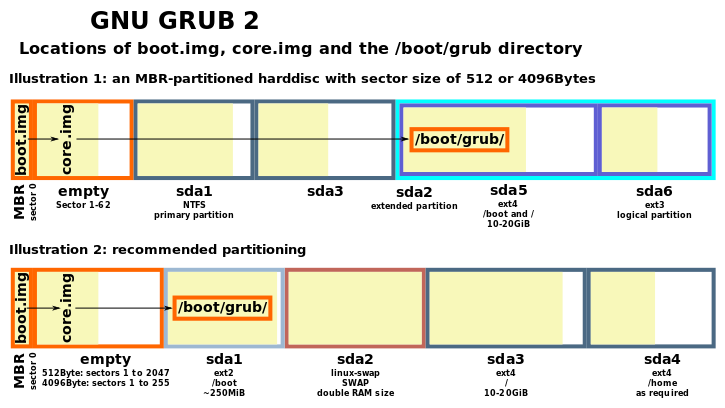 NOTE: When you see the typical GRUB2 menu where you select which OS/Kernel to boot, you're referencing the system's /boot/grub directory at this point.

Linux (the kernel) does not care how many boot partitions you have. Loading the kernel from disk is the job of the bootloader (e.g. grub, grub2, lilo) and these tools also do not care about the number of locations a kernel might be located. They only care about the specific location.

As an example, my boot partition is /dev/md1, which is a mdadm RAID mirror backed by the physical partitions /dev/sde1 and /dev/sdf1. I can mount these individually if I wanted and as such this technically counts as having two boot partitions, though they should contain the same data.

Having two partitions for /boot for me is an availability issue, but they could equally be different /boot partitions. The next step to is how does the bootloader know? Here is how:

This is an excerpt from a grub2 configuration and you'll note that the only differences are root=hd0,1 and root=hd1,1 which establish which boot partition that entry references.

Now to walk you though a boot so you can understand what is going on here.

The bootloader doesn't care how many boot partitions you have, it only cares where they are and you must tell it that information.

The kernel doesn't care how many boot partitions you have, because it never needs to see them (you only need to have it available to add new kernels for example).

Not the answer you're looking for? Browse other questions tagged boot partition grub or ask your own question.

36
How does a kernel mount the root partition?
2
Does only /boot have to be on a bootable partition?

2
How to modify a partitioning layout (which may involve converting a primary partition to an extended one)
4
How extend linux partition with?(after success to extend : fail to boot computer)
10
How to move EFI and boot partitions?
6
Does /boot need to be mounted on a separate primary partition?
2
Debian: Boot fails when mounting sda with "invalid argument"
16
How to change default boot partition?
0
Preseed existing partitions
0
Accidentally mounted /boot on my data partition during Timeshift recovery