I have been using a raspberry PI since more than one year, with two USB 500GB IDE hard drives as a NAS/torrent box. Yesterday, one of the two hard drives started a repetitive rattling noise, and I could not read data from it through sftp.

I assumed it was broken, so I opened the box the raspberry and the hard drives were in, connected the first HD to my laptop using the IDE to USB adapter I had. Windows wasn't able to mount it. I really cannot remember which FS this HD is using, so I tried to mount it on a Debian Virtual Machine. The image below shows the error I get. I have no idea what it means, what I understand is that Debian does not recognize which FS the hard disk is using. 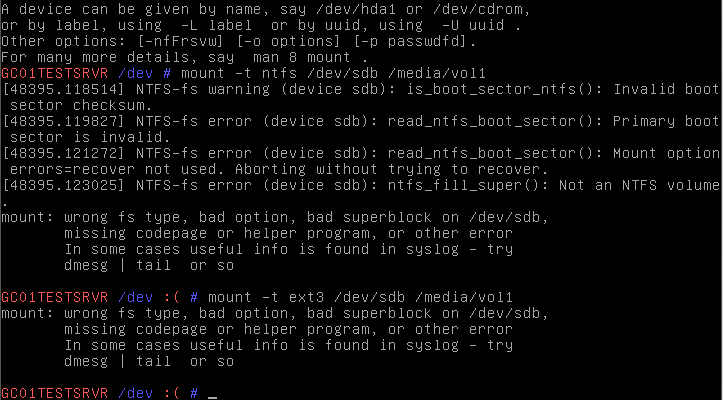 This is the result of fdisk -l (only the part regarding the mentioned HDD):

You're trying to mount the entire drive, not the formatted parttion. Try mounting /dev/sdb1.

"Rattling noise" from the disk probably means the disk joined the big RAID in the sky. My condolences. The data on the disk was hopefully not critical...

Not the answer you're looking for? Browse other questions tagged filesystems mount or ask your own question.

3
Why my partitions don't show the right capacity on a 4096 byte physical block hard drive?
1
How to format a 1GB USB stick to FAT32 with 512 bytes sector?
4
Stat, Blocks and Sector size - ext4
3
How to mount sdb directly or using LVM partitions on sda?
2
Can't mount partition/partitions not recognized in Solaris 11.1