I run a medium VPS (4GB RAM) as a web server. I host some private Ruby on Rails sites with Apache and mod_passenger. I also have two legacy apps which run with "passenger standalone" (two Nginx servers with passenger on ports 3000 and 4000). Apache acts as a proxy for those.

Most of the time this is works okay, but every few months the whole system goes berserk:

Sometimes this clears up by itself, sometimes I have to ask my provider to reboot the system because I can't even SSH into it.

This always happens at night, when traffic is very low. Here are two graphs: 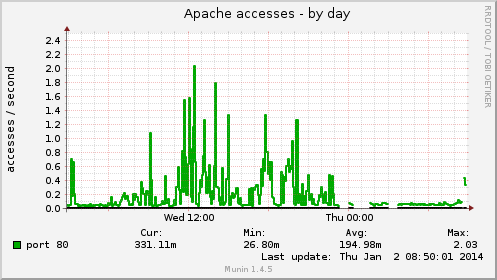 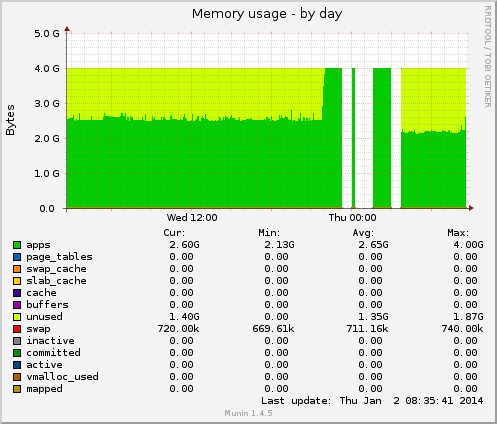 How do I get to the bottom of this? Which steps can I take to debug this situation? Is it possible that I have a bad neighbor on the machine?

Other processes on the major machine: MySQL, PostgreSQL, Elasticsearch, Redis

I'm looking for a tool that records processes with their memory & cpu consumption so I can track down the trouble maker(s). Is something like that out there or do I have to roll my own?

From my personal experience of managing RoR apps, memory leaks can easily creep in and can catch you at most unexpected time. I would recommend doing two things to catch the culprit:

Usually there is a bad sql query or a rouge gem that cause this. If anything has recently changed with respect to these, then you may want to look into that as well.

Not the answer you're looking for? Browse other questions tagged linux debian apache-httpd memory nginx or ask your own question.

7
Permanent swapping with lots of free memory
5
How do you prevent system from freezing when memory is used up?
11
Is it possible to impose some kind of soft limit on the memory consumption of processes?
6
82MB of "reserved memory" on 512MB (x86) system
1
Why "Sum of RES" not equal to "Mem Used + Swap Used" (Ubuntu 18.04)?