I'm trying to add some color to my git configuration and I want to know what color names are available on the terminal.

Many online references often talk about color names that are not defined on my system, so I just need a way to see what my default options are.

The 24-bit space is used by your GUI; transparency is implemented by increasing this to a 32-bit space. However, git isn't a GUI (G = graphical) tool, it's a TUI (T = terminal) tool, and it is limited to the colors available on a normal terminal.

I would like a solution that works for all distros, but primarily Debian

If you want this to be properly portable, you should rely only on the eight standard ANSI colors:

A little disappointing next to the X11 list, but better than nothing at all! These also have a "bold" or "bright" version that is standard, making 16 colors, which you may be able to specify as, e.g., "brightyellow" (or conversely, "darkyellow").

Most GUI terminals1 have 256 color support and some terminal apps can exploit this. To test, you first need to set the $TERM variable appropriately:

Your terminal emulator may also have a configuration option for this. Colors under the xterm 256 color protocol are indexed: 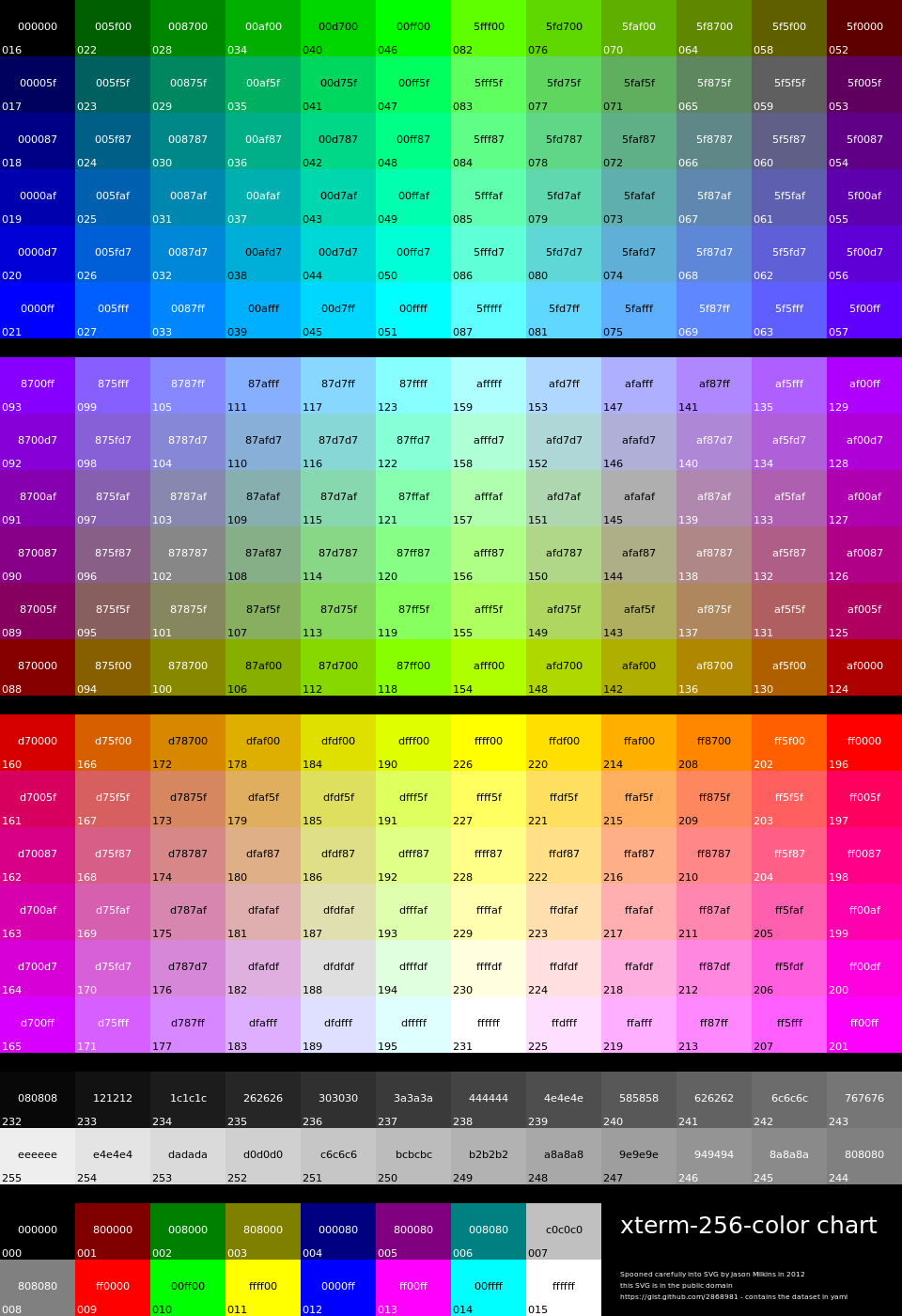 The index number is in the bottom left corner. Notice the set at the bottom of this chart (0-15) is the 16 basic (bright and dark) ANSI colors. To reference one of these colors under the standard, you use color + the index number, eg. color40.

1. A "GUI terminal" is a terminal emulator that runs in a GUI context, such as xterm, the GNOME terminal, etc. However, this does not make TUI apps (such as git) running in a GUI terminal into GUI apps. They are still TUI apps and are bound by that context.

Not the answer you're looking for? Browse other questions tagged terminal colors or ask your own question.

9
How to add color themes to Gnome-Terminal's GUI preferences?
19
Git pager is less, but what is causing the output coloring?
4
terminal color theory
4
Different vim colors and styles in Tmux and Gnome
2
Alternate prompt, command, and output color
2
Is ls --color falling back to precompiled LS_COLORS when using 256 color escape sequences?
1
Force Bash to use 8 colors
4
How do I adjust the display color whitout any hardware (e.g. spectrometer)?