Can the empty spaces/background in a terminal be replaced with a random(but pretty) pattern of ASCII characters?

There are many ways to colorize the terminal and shell environment. The output of individual commands, such as ls and grep, can also be colorized. Not directly related but interesting nonetheless is the notion of playing media at the console but this seemingly relies on some framework (libraries) on top of the windowing system. The following question is geared solely at the bash shell and its implementation in the Linux terminal framework and its underpinnings.

Please consider the following montage of ASCII "renderings" of a scene in a 2D game:

These are not randomly generated scenes. The segments I've selected all actually depict some form of "grassland" terrain (trees, bushes&shrubs, flowers, grass etc.) from a game that uses ASCII characters to represent such objects. The last 4 scenes showcase user made tilesets which are basically a remap of ASCII characters with color specs (such details are trivial - suffice it to say that this is the visual inspiration for what I'm trying to accomplish here in terms of visuals and "pattern").

The common features those scenes in the montage share are:

What I have in a VM at the moment is Arch Linux and although the question is not distribution specific, I've looked into their documentation for customizing the /etc/bash.bashrc file. I can see that lots of explaining go into configuring the appearance of the prompt and generally all the foreground elements. There is little information on any configuration for the background, except usually for a solid color, such as these settings and tips:

I still don't conceptually grasp what are those empty/blank/background "spaces" that I didn't type when I use the console i.e. "what are they made of?" so to speak. Especially those that are not at the prompt, and which wrap around the commands that are echoed. In respect to what happens on the active line, it is possible to demonstrate that bash acts in a "line-oriented" way and that some operations trigger a clearing of the active line (for i in $(seq 1 $(expr $(tput lines) \* $(tput cols))); do echo -n M; done; tput cup 15 1, then at the prompt type a char and backspace it - demonstrated a contributor) - the extent of which may vary from a CLI to another i.e. zsh. Furthermore, it seems when I add something like \[\033[44m\] to my PS1 line in bash.bashrc I get a blue background after reloading bash - so obviously I know that there is some leverage here over of the output appearance insofar as the background is concerned.

But I also know that bash is a piece of software relying on some other facility in the form of the TTY subsystem for bringing things to the screen - and this goes down from there to the VT component in the kernel I assume. pstree -Ap on Arch shows systemd linked to login and then to bash.

The Arch Linux distribution relies on agetty for TTY services. A simple echo $TERM will yield the type of terminal in use ("linux" here outside of any DE) and the infocmp[-d spec1 spec2] command with no parameter shows the active terminal capabilities and profile information from the terminfo(5) terminal database:

As it stands, many capabilities can be leveraged from the terminal framework and it is basically those features which are exposed in the bash.bashrc configuration file insofar as the prompt is customized by setting the PS1 variable. Control and escape sequences are used to basically interrupt the flow of character displaying in the terminal in order to supply functions, including moving the cursor and other capabilities described in the terminal information database. Many of those functions are passed in using the well known ESC[ (or \33) Control Sequence Introducer (more sequences here and here, and some examples). Furthermore, it is also possible to use the tput utility directly on the CLI to change some terminal properties; for instance tput setab 4 will have bash echo commands on a blue background.

If we strace bash we can see both the escape sequences and behavior in action:

This provides context for the question Can the empty spaces/background color in a terminal be replaced with a random(but pretty) set of ASCII characters? but gives no idea of how to implement the features or of what I'm looking for in the terminal.

So I've created a crude mockup as an example of what the end result could look like if this were possible (no seriously:): 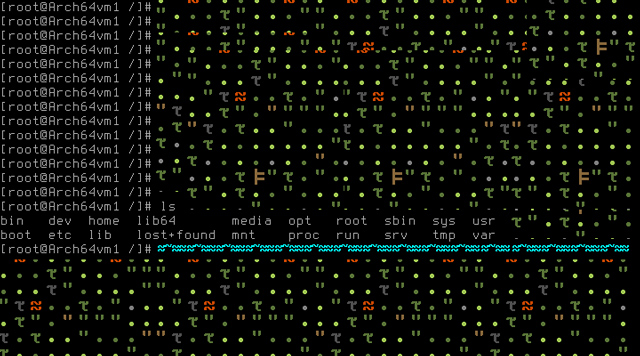 Basically all the "empty space" in the terminal would be filled with the pattern(here I "tile" one of the image from above but I would like in the actual implementation for each individual "blank" to be generated randomly from the set of 5-6 characters and features documented from the montage which would be specified). There is a different pattern for the active command line i.e. wavy "water" but I'd settle for the line being blue. As this was imagined, commands would "erase" the "water" as they get typed on the active line and of course a constraint would be that the pattern of characters never gets interpreted by the CLI otherwise it would make it useless.

So is there any configuration exposed in bash or in the terminal framework proper, or a script which would allow to use a set of characters and some control over colors to modify the output of bash in terminal so as to generate a somewhat random pattern for the background (which would be similar to what I've shown above)? Or should I simply settle for something like trying to supply a full pattern image as a background for the tty?

The following expression I added to my .bashrc file puts together some of the notions we explored and constitutes a (very)basic proof of concept for the visuals in the standard linux terminal: 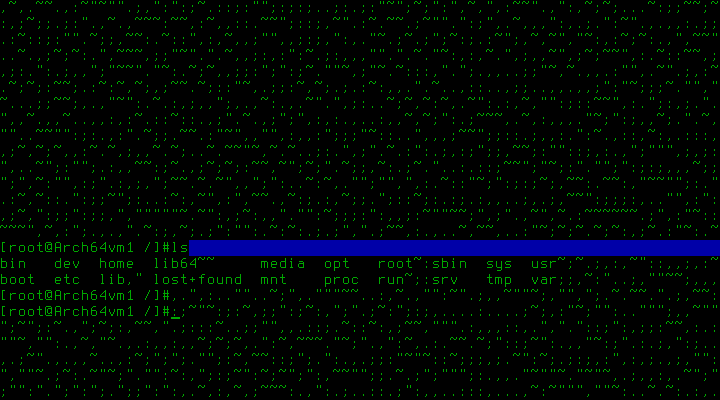 The value of the variable PROMPT_COMMAND is examined just before Bash prints each primary prompt. I know usually you would use the variable to call a script where you could process elements from the display etc. but I'm rather trying to do this directly in my .bashrc file. Initially I thought I could implement some positional awareness i.e. where is the cursor before execution (so I could go render things on screen anywhere with tput then come back to the position I was before, using something like this to extract position:

I would pipe the value to cut -f1 -d";". I can do this on the CLI but making this work inside the sequence of elements in the PS1/P_C variables is out of my reach at the moment and it's possible that whatever command is put in PROMPT_COMMAND may not be evaluated at every carriage return but rather only once(?) despite being executed every time (see observations below).

So the best I could do is carry over my initial sequence and add some commands to both PROMPT_COMMAND and the definition of the PS1 variable in .bashrc. Like so:

In summary I'm using P_C to try to implement a persisting visual pattern i.e. 2 lines get added. Unfortunately I cannot succeed at creating both this pattern while repeating my "water" trick i.e. having the active line blue (which is just changing the background color, doing a clear line, then changing the background back to black). I've put together an image to show how this plays together: 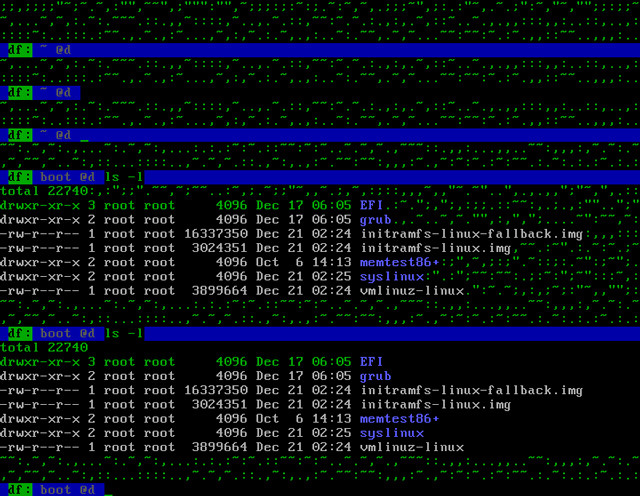 What is done with PROMPT_COMMAND is that 3 lines of patterns are printed every time before the prompt is generated - and those 3 sets of patterns are individually generated within the constraints explained in 0.2 - meaningless for the water as it's 1 char but still. Then we go up two lines (using tput cuu 2) and the prompt is generated on the middle line according to PS1. We still have our initial set of command for the full screen pattern on .bashrc load which is executed only once when we log in to the terminal. Now we have some padding around the active line which has its own blue pattern which always gets repeated when there's a return carriage. The contents of the PS1 variable and the P_C have been sanitized. The syntax of the escape sequences and color coding embedded within long echo sequences can be tricky. Errors lead to weird terminal behavior including lines that overwrite each other, a prompt that appears away from the left margin or unusual output to stuff that has been processed unintentionally. A condition exists with what I'm doing, where an extra space is required inside the PS1 variable to counter a visual difference between the linux terminal and lxterm with my setup (Arch Bang). Without the extra space, the linux terminal prints the first character of the prompt at the end of the last line for some reason I can't figure out (of course it's something that I do and not the default behavior). Also can't figure out how to generate some random effect (bold, inverse etc) to the set of chars in quotation marks, as it was decided early on to generate longer strings to increase performance. There is still no real persistence of the pattern outside the padding around the prompt, but at least there's the water and it's simpler than before and somewhat more predictable.

Initial pattern when the terminal opens 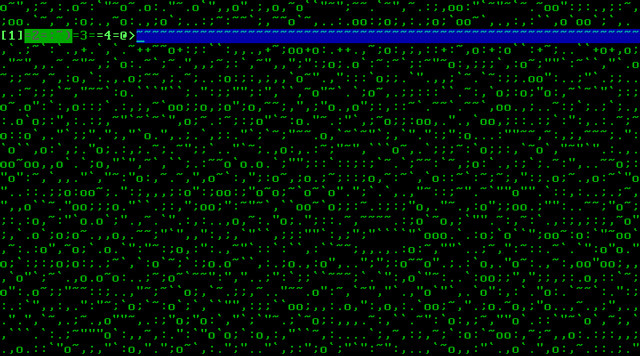 Behavior after a clear and pressing enter successively at the prompt 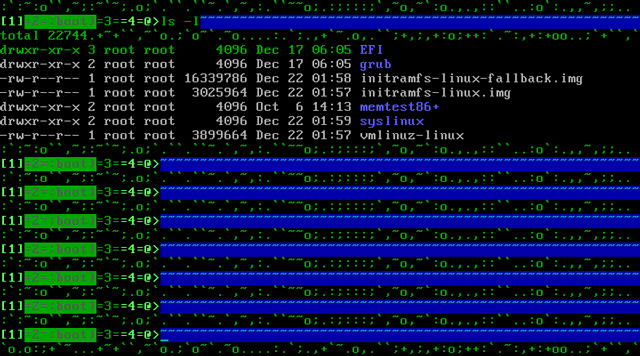 The earlier implementations provided with the question rely on a sequence of commands which uses tr and a set of single byte characters. As was explained in this Q&A, the utility cannot process multibyte characters such as Unicode. But leveraging those characters was quite essential in achieving the desired effect. A "solution" was provided which allows to mix the single byte and multi byte chars in a single stream for rendering. The solution developed there is presented and customized here:

This implementation no longer renders per line but rather prints the whole sequence in one shot at the end of the sed processing. This appears only at login once or generally when bash is launched. Here is one such random pattern at launch (we can see two shades of green and two shades of cyan): 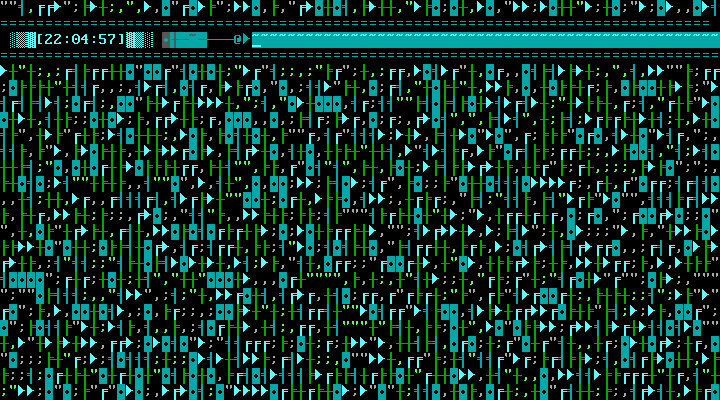 The screens show the result in the standard linux terminal and it works in xterm too. I've used some of those new pattern chars in the PS1 prompt whereas the PROMPT_COMMAND just takes care of the active line and its 2 line padding which use 1 byte chars.

The pattern also matches well my current distribution which calls archbey in .bashrc.: 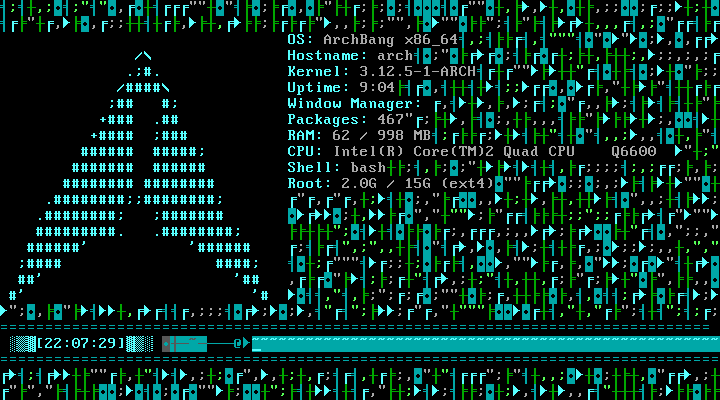 It's in for Christmas! Cheers people :)

Display is managed by the terminal a software which works the same as a web browser: it interprets character sequences to set the display (see man terminfo). The bash shell will not tells the terminal how to fill the empty region of the screen.

Some terminals are able to have pictures as background like gterm but it is not made by the shell.

270
Colorizing your terminal and shell environment?
193
Terminal prompt not wrapping correctly
23
How to colorize output of ls ?
31
Multicolored Grep
7
Is it possible to view media on the console?
6
Heirloom Toolchest tr: error(s) trying to delete the complement of a set containing a multibyte character?
4
How can you get console backgrounds for Arch Linux?
2
How can I prevent execution of part of /etc/profile in my login shell?
3
Using a variable inside a sequence of commands in bash to supplement an existing string - syntax error or flawed design?