Best way to create RAID on an existing system drive

I want to add another disk as RAID 1 to test my database performance. I am trying to not re-do the whole system, is it possible?

Currently I have a single 1TB HDD with one 100GB system partition (and swap, boot) and a 850GB /home partition. I want to if possible, add another 1TB drive and convert the whole system to RAID 1, or atleast raid the /home partition (and discard the other 150GB on the second disk).

Is it possible? atleast in software RAID (on CentOS 6.4)

If you're using LVM for the primary partition you can always add another disk to the pool and then extend into it. Given you're using CentOS I would assume that the system was setup so that you have an LVM partition providing your storage and then their are logical volumes coming from LVM for /home and /.

Here on this CentOS 6.x system I have the following physical volumes being included into LVM.

The HDD /dev/sda2 is part of a single volume group:

The logical volumes are as follows:

So you could add another disk to the volume group and then make use of it in which ever logical volume needs the space. 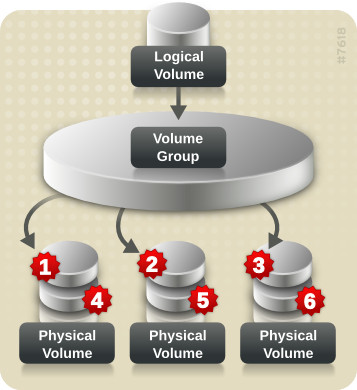 The above, hopefully, illustrates how LVM architecturally works. Often times, people will create LVM volume groups which sit on top of RAID arrays. This gives you the ability to expand a filesystem using LVM but with the protection offered through the use of a RAID array for redundancy purposes.

For the nitty gritty details I often refer to this HowtoForge article, titled: How To Set Up Software RAID1 On A Running LVM System (Incl. GRUB2 Configuration) (Ubuntu 10.04). Don't let the reference to Ubuntu scare you away, most of the steps are identical and I find the level of details in this particular article crucial to understanding what you're actually doing for the various steps when migrating to a LVM + RAID1 setup.

Not the answer you're looking for? Browse other questions tagged centos raid software-raid or ask your own question.

7
How to raid-mirror existing root partition?
23
Can I create a software RAID 1 with one device
5
Can I create a 2 TB RAID-1 array out of one 2 TB disk and two 1 TB disks while preserving 1 TB of data?
5
Expand Disk on VMware but no effect?
1
How do I migrate a RAID system to a larger set of HDDS?
0
HW Raid - Centos 5 - Boot Issues
0
raid 2 smaller drives with one larger drive
0
Is it possible to move non system but data software RAID-1 to different system