Is there any reason why I get ^[[A when I press up arrow at the console login screen?

Whenever I'm at the console login, I press up arrow intentionally to see the previously typed commands. But I see this ^[[A.

Does ^[[A sort of characters imply anything? 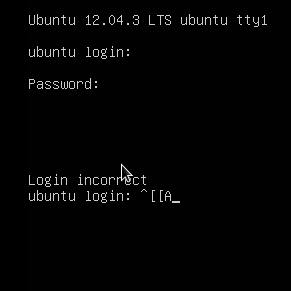 Keyboards send events to the computer. An event says “scan code nnn down” or “scan code nnn up”. At the other end of the chain, applications running in a terminal expect input in the form of a sequence of characters. (Unless they've requested raw access, like the X server does.) When you press A, the keyboard sends the information “scan code 38 down”. The console driver looks up its keymap and transforms this into “character a” (if no modifier key is pressed).

The user name prompt on the console is dumb and doesn't understand most escape sequences. It doesn't have the line edition and history features that you're used to: those are provided by the shell, and until you log in, you don't have a shell. So it simply displays the escape sequence. There is no glyph for the ␛ character, so it's displayed as ^[. The ^ sign is traditionally used as a prefix for control characters, and escape is ^[ because of its byte value: it's the byte value of [, minus 64.

Some keys are only modifiers and are not transmitted to terminal applications. For example, when you press Shift, this information stays in the terminal driver, and is taken into account if you then press A, so the driver sends A to the application instead of a.

Additionally some function keys may not be mapped in your console.

For a similar view in the GUI, see What is bash's meta key?

That's the way that the terminal represents the raw keycode of the Up key sent to it by the keyboard. Basically, your shell would normally intercept the keypress, but there's nothing to do that at the login prompt. So the character that you typed gets printed to the console just like any other letter (or number, or whatever).

You're probably running sh which outputs the raw keycodes generated when you press the Up arrow key.

A more advanced shell like bash intercepts these keycodes and does something with them. E.g. show the last command in its history.

To fix your issue, type bash to enter a bash shell. Then use the up/down arrow commands (note, your history would start afresh in the new shell).

It's not about how the keys are represented by the "terminal" (i.e., the terminal emulator application). What you're seeing is the ANSI code (ANSI escape sequence) for moving upward one line, but translated into printable form.

Finally: Control, Alt, and the other keys you mentioned do not map to character sequences. They affect the character sent by another keypress (like the a/A example above), or they simply have no mapping to text. Such keypresses can only be detected by programs that listen for keyboard events. They cannot be seen by reading from standard input (or be written to a file).

This behavoir is different from shell to shell. Most shells use a library called readline to edit lines in the prompt. Here is a complete command reference for this library, so when an application is using readline you can edit and navigate the lines with this commands.

The vertical arrow keys are configured in readline to navigate the command history. And in the login promt there is no command history. That's why the characters ^[[A and ^[[B are printed on the screen. So what does ^[[A mean?

The manual page of bash says under PROMPTING:

The escape sequences for the arrow keys in ANSI are:

Those are ANSI escape codes. ^[ is the notation your shell uses to display an ESC byte (ASCII byte 27). So your example is an ESC byte followed by the text [A. As you can see in the Wikipedia article, ^[[ (ESC followed by [) is a Control Sequence Introducer or CSI. CSI A means move the cursor up by one column.

If you want to see an escape code in the terminal, type CTRL+V and then another key sequence. For example, CTRL+V followed by the up arrow shows ^[[A.

The command shell, for example Bash is the program that translate arrow up into the action "retrieve previous command". You don't have a command shell running.

Not the answer you're looking for? Browse other questions tagged linux keyboard login console escape-characters or ask your own question.

0
Why does delete work but not arrow keys in terminal?
20
What is bash's meta key?
4
How terminal emulators handle Shift+FKeys?
0
Tmux - Arrow keys return raw data/non-escaped caracters ^[[A ^[[B ^[[D ^[[C

7
barcode scanner input when running xorg and evdev
2
advance strategy to interrupt a linux application that has "hung" and made X desktop unresponsive
3
Why CentOS 6 adjusts console width when running screen?
2
Any character I type on the non-GUI console gets prepended ^[
0
3 arrow keys don't work and spontaneous full kbd failure
0
Is there a way to disable only root login via serial console on RHEL6?
8
Keyboard shortcuts in the virtual terminal
0
/dev/console behavior that makes no sense to me
1
How do I stop the "[A" showing sometimes when I press the up arrow key?